I’ve had this arrangement, in various forms, in my house for a number of years. It’s just a bundle of curly willow twigs that I grabbed from my friend Keri’s garden some years back. She had a big pile of prunings of it, and was quite bemused when I ferreted through her pile and took a bunch home in my car. 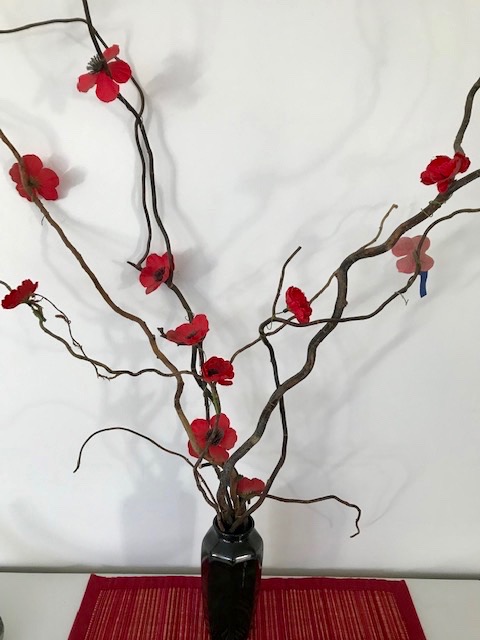 I love twisty branches and interesting natural shapes. I guess it’s in my blood, because my grandfather used to collect interestingly-shaped driftwood and mount them on pieces of slate. I still have several pieces of his, and I love them. He used to drill a hole in them and my grandmother would put in a plastic flower. I didn’t like plastic flowers, so I tossed them.

Anyway for some years I just kept them in a vase in the entry hall of my old house. And one year someone came to the door selling poppies for Remembrance Day (11th November) and I bought a poppy in memory of my dad. And then I bought another two in memory of two of my uncles, who were his good buddies and in his unit. They later married his sisters and became my uncles.

And because I wasn’t going anywhere to wear these poppies, I on a whim, twisted their wires onto the curly willow twigs. And I liked the effect.  Guess Nana’s plastic flowers had left their influence. <g> 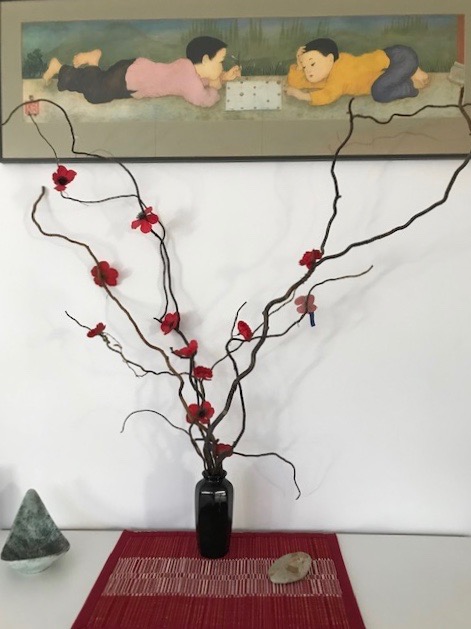 Since then, every time I’ve come across someone selling Remembrance Day poppies, I’ve bought a few more and added them to my twigs. When I look at it I think of my dad, and my various uncles.

The poppies are slightly different every year — one year they had a brooch attachment on them — but I just twist them on with florist’s wire. And I weigh the vase down with river stones and glass marbles, because the twigs are quite long for such a small vase and it can easily overbalance. But I like the vase being small and black —it suits the  arrangement I think.

For years nobody commented on my twigs and poppy arrangement. Now I’m in my new home, and the arrangement is in the living-room instead of the entry hall, and several people have commented on it.

One person said, “Oh I like your japonica arrangement,” (Japonica is also called flowering quince).  I love it when it flowers in early spring, with pretty blossoms on bare, elegant branches.  Another friend, who I sent some photos of my new house said “OMG I love those flowers  under the picture — what are they?” And when I explained, she asked me to grab some curly willow twigs next time I visited Keri and she’d put Remembrance Day poppies on them for her dad.

I’m late to the party on this one, but I think that’s lovely! I have a curly willow in my yard that struggles year after year because the previous owner planted it in the wrong spot. I really need to move it, but I can’t alone and my husband needs his other knee replaced so digging is not good for him right now. Oddly, if I don’t trim all of the dead branches off, it seems to do better. I don’t get it. I didn’t save any but I wish I had now.

Theo, I’m planning to propagate some curly willow pieces next time I go to Keri’s place, as well as take some for my other friend. Apparently — according to a google search I did— they’re quite easy to propagate from cuttings. You might be able to start a new tree and put it in a better spot.

Anne, I also love twisty twigs and nice pieces of driftwood–I have the driftwood around the house and one piece has several tiny, tiny sea gulls on pins stuck in. Curly willow hasn’t come my way, but if it does, I can think of nothing lovelier or more meaningful that adding poppies of remembrance.

Thanks, Mary Jo. A more recent post has a photo that a reader sent me, and I initially called her twigs curly willow, but then I read her email properly and they’re from her “Tortured hazelnut” bush, so maybe you could find that. It seems twistier than the curly willow. I don’t think it produces nuts. https://davesgarden.com/guides/pf/go/937/#b

What a lovely oriental style display and there is a plus – the flowers will not die and drop off. I love the simplicity and the colors. You gave it a wonderful spot in your house to show its simple beauty. I love to do similar things that will keep longer than flowers. Thanks for this blog entry.

Thanks, Margot. I need permanent things like this, as I have lost my old garden, from which I could just wander out and pick a bit of this and a bit of that and have a vase full of garden leaves and flowers to freshen the house. My new garden has a few vegie boxes (currently not very productive, because it’s winter) and a small garden of native plants, which are lovely, but I’m reluctant to pick them.