A friend of mine gave me a glass terrarium as a house-warming present, and it’s been sitting there untouched and empty for weeks, and yesterday, I finally bit the bullet and filled it. 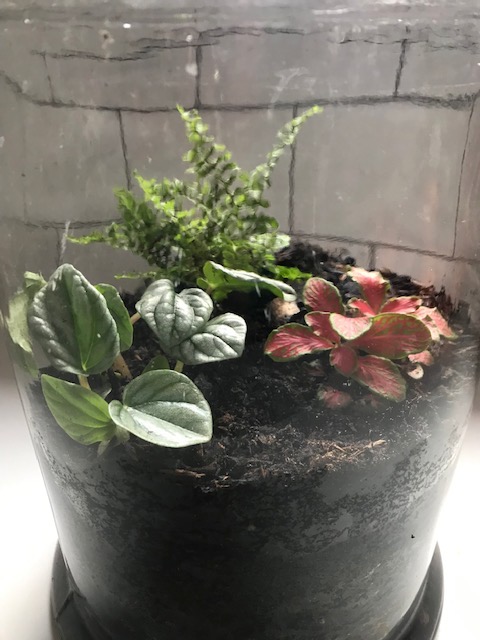 Part of the delay was to get the gravel to line the base (for good drainage), and also the charcoal to keep the potting mix sweet, and then once I had all that, I had to decide on what plants I wanted to use. I decided to break up the watermelon peperomia babies I’d gown from leaf cuttings, started around the beginning of the year. 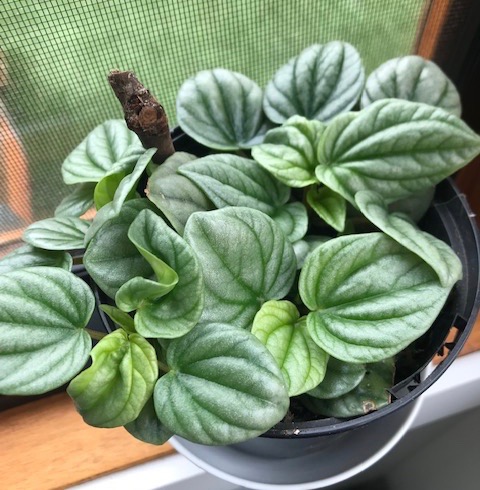 They’d done really well, and were now bursting out of their little pot, and when I took them out of the pot and broke them up, there were five healthy little babies, so one of them went into the terrarium. And then I added a tiny fern and a little red freckle plant (forgotten the botanical name.) So, only three little plants, but they’ll grow.

And when the plants have settled in a bit, I’ll be adding in some interesting rocks — no shortage of them here, because I have a bit of a rock fetish, and collect them all the time. And maybe I’ll get some kind of ground cover — maybe baby’s tears or some kind of small creeping green plant. But for the moment this is all there is.

I’ve always liked miniatures and mini-worlds but I’m trying to be restrained and elegant and not cram in a bunch of tiny miniature things. I’ve seen some amazing terrarium “scenes” people have created and though I’m tempted, for the moment I’ll just leave the little plants to settle in peace. And hopefully thrive. 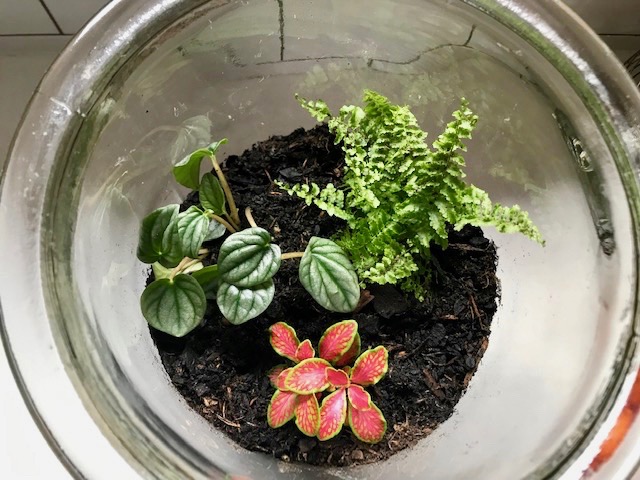 I’ve just had a new rug delivered. I made shameless use of the young delivery guys in moving my dining table off the shabby old rug, rolling out the new rug and putting the table back. And here it is. 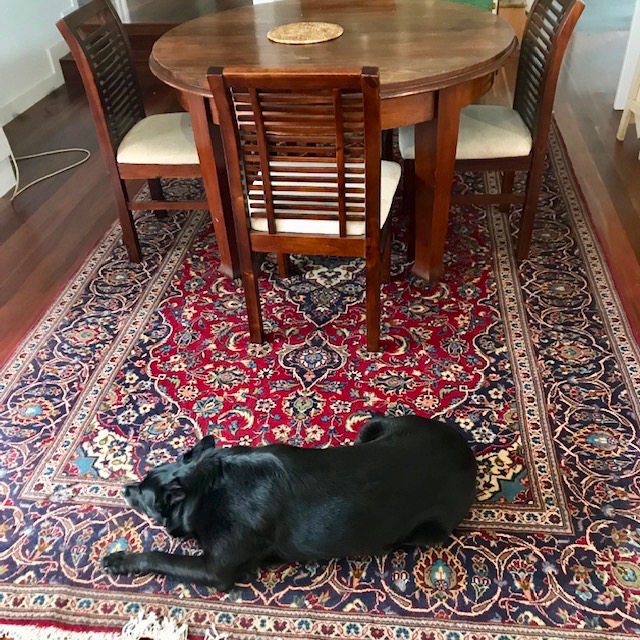 The rug also had Milly’s instant seal of approval — she immediately flopped down on it, claiming it without even a sniff of cautious inspection — even while I was trying to tweak the arrangement slightly, so I had to drag rug+table+dog. <g>

I say ‘new’  but it’s actually second-hand. I’ve been looking at rugs for a while now — the living area in my new house is quite big and I want to use rugs to define the sitting area and the dining area.  I’m very fond of the Persian-style of rug, and though I’d looked in a few rug places, nothing really hit the spot.

I went onto ebay and saw a possibility, but when I went to the warehouse see it in person it was all reds which was a bit too much red for me. But I spotted this one sitting under a couch  and asked about it. They were using it for staging because it had two tiny holes (invisible to me unless I bend down with my glasses on) so I asked how much it was. 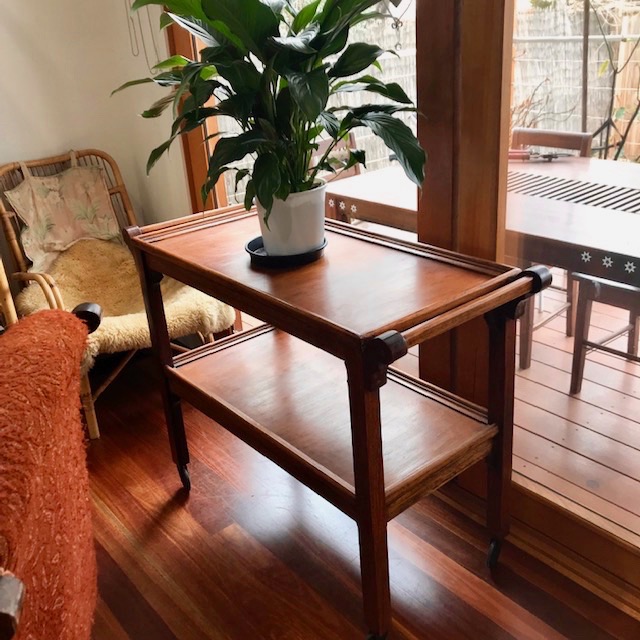 I haggled a bit (which I’m really terrible at) and bought it, along with this old wooden tea-trolley.

Not quite sure what I’ll do with the trolley, or where I’ll put it, but for the moment it’s carrying a plant.

Now I just need to find a rug to define the lounge area.

I also discovered that it will take 16 weeks before my new bookshelves will be built. sigh. But apparently that’s the norm at the moment — covid-related shortages, apparently — and that’s from friends telling me that, not the company. So this house will remain Box City for a long while yet.

But in the meantime, I have a lovely new rug to smile at.

If you’ve read a number of my books, you’ll notice that my heroes often select a gingernut, when offered refreshments at afternoon teat-time. This has confused enough copyeditors (and a few readers) to make me realize that gingernuts are not common in the USA. 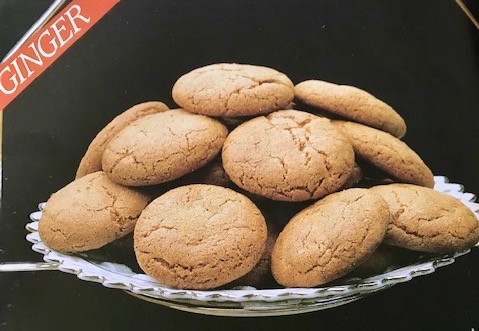 So to clarify, they are biscuits (cookies if you’re in the USA). I don’t know why they’re called gingernuts, but that’s the English language for you.
And to add to the confusion, there are no nuts in gingernuts. There is, however, ginger.

They’re very popular in the UK and Australia and elsewhere, and as well as home-baked versions they’re widely available in supermarkets.

Yesterday I was in the mood to bake some biscuits (cookies). It’s part of an ongoing experiment to learn to work with the very fancy oven in my new home. I’m used to the kind of oven where you simply choose a temperature and then bake. Not this oven, which has all kinds of cooking and baking styles. So when a friend came around to visit I thought I’d try making biscuits. 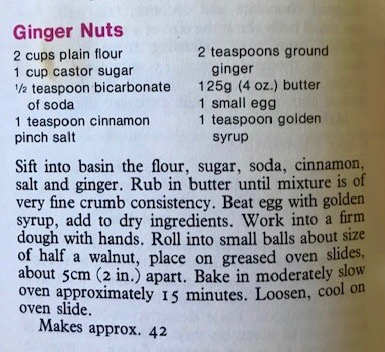 I planned to make gingernuts, but it turned out I had no ground ginger — I threw out quite a few aging spices when I moved, and clearly I hadn’t yet replaced them. Nor did I have any fresh ginger in the fridge. I did have some Japanese pickled ginger, but didn’t think that would do the trick. What I did have was a small jar of candied ginger (also known as crystallized ginger — cooked in sugar then dried).

So instead of trying to make gingernuts with no proper ginger, I decided to make ANZAC biscuits and add spices to them. ANZAC biscuits are dead easy and I almost always have the ingredients in the cupboard, so they’re a good fall-back biscuit. Plus they’re yummy.  So I mixed up a batch of ANZAC biscuits, and added spices to it — cinnamon, allspice, mixed spices and ground pepper, and I threw some of the candied ginger into the blender, chopped it finely, and added that to the mix. (No exact quantities, I’m sorry, as I just made it up.) 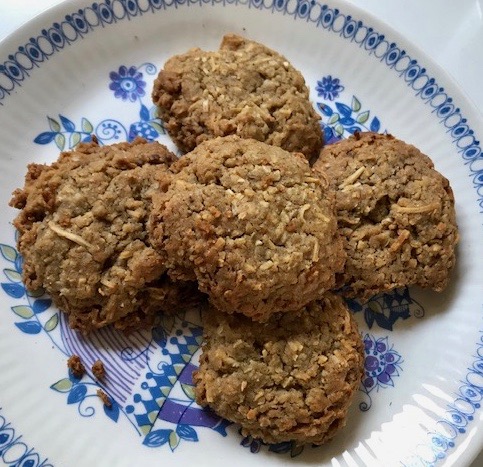 These are the biscuits I made  — basic ANZACs with added spices and bits of candied ginger. They look a bit rough and rustic, but that’s because they’re made with rolled oats and coconut, among other things. There’s a recipe here, which also gives you the background as to why they’re called ANZACs. It also gives you an alternative to golden syrup, which is a household item here, but not in the USA.

Yesterday the biscuits tasted very nice — we ate them warm out of the oven — but I couldn’t really taste any ginger. That was okay, because  as it turned out, my friend wasn’t a big fan of ginger. But today I can really taste the ginger, and I like it so much I’m going to add those spices and ginger to every ANZAC biscuit I make in future.