On the Word Wenches’ blog the other day we were talking about the birds we like to watch, and I mentioned tawny frogmouths, an Australian owl-like bird (but not an owl) that is brilliantly camouflaged — it looks like a scruffy piece of bark or a branch, until it opens its eyes and looks at you.

They mate for life, and are good parents to their chicks, which as you can see from this photo of three little chicks, are adorable. At my old house I sometimes used to see a pair of tawny frogmouths sitting on a high branch of a gum tree with a half-grown chick between them. 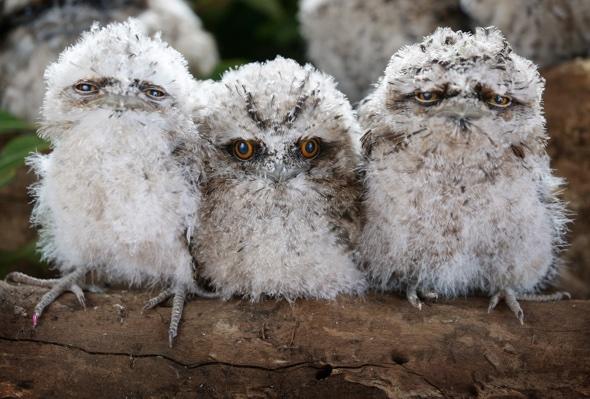 I sent this pic to the other word wenches, and Christina Courtenay commented that they looked like some of the stuff that came out of her dryer. LOL. And Mary Jo Putney commented that they looked like Jayne Ann Krentz’s dust-bunnies from her Harmony series written under the name of Jayne Castle. Other friends have talked about the dust-bunnies often, but I’ve never been able to buy those books on kindle. However, because of our conversation, I checked again — and lo! several were available. So I’m finally catching up on the dust-bunnies — and visualizing tawny frogmouth chicks, with a few more legs.

Those chicks do look like they came out of the dryer!! :o)

Oh, my, heavens! They are absolutely adorable!!

I love the coiled branches. I also love gnarled, tortured looking trees, BTW. In fact, they’re the only kind of tree I can draw. As for your frogmouth chicks – they are adorable! nd they do indeed bear a strong resemblance to Jayne Cstle’s dust bunnies. I hope sshe reads your blog! BTW – I think you will very much enjoy her stories which co-star the dust bunnies. They make wonderful pets, IMHO.

Thanks, Binnie — I’ve started reading the Jayne Castle stories, now that they’re available for Australians to read on kindle. (It’s infuriating — often I can’t buy some kindle books, even though I’m on amazon.com. And sometimes the price for me is ridiculously high, when it’s not for my US friends. My guess is they’re decisions made by the Australian publishers. Short-sighted, IMO.)

I’m enjoying the Jayne Castle stories, and yes, whenever the dust bunnies are mentioned, I picture tawny frogmouth chicks with a few extra legs and blue eyes.

ohhhhh – I would love to have one of those babies, just to admire it. And yes, I have imagined what dust bunnies look like from the Jayne Castle books. I believe those babies fit the bill.
Thanks for the recipes and thanks for the picture of the birds….they are absolutely gorgeous.

There are also dustbunnies under “The Big Comfy Couch”, a public broadcasting kids’ show that my daughters loved. I don’t know whether it is around any more, but it was a witty and entertaining show.