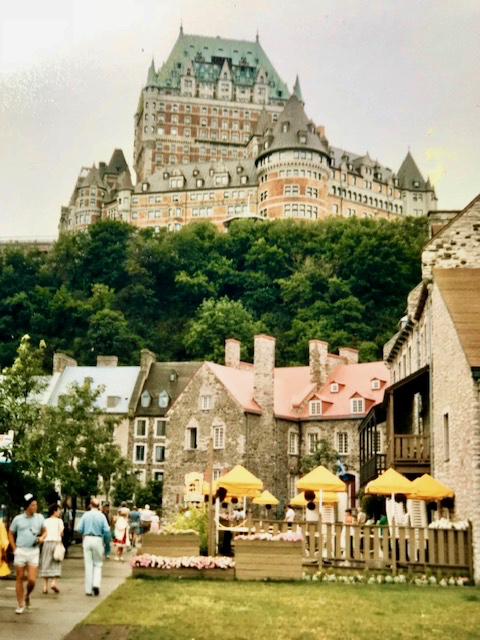 I recognized the photo immediately as the Chateau Frontenac since I was born in Montreal and we visited Quebec City and stayed there. A charming, fascinating and historic city with an amazing setting above the St. Lawrence River.

I loved my time in Quebec — both Quebec city and the countryside. It’s very beautiful and everyone I met was so friendly and the non-English speaking people in the country were so patient with my rusty schoolgirl French. And it was there, in a small room on a rainy day, that I took the first baby steps toward becoming a writer, so the place has added significance for me.

The writing most of us do post education is not creative. It needs to be clear, concise, and accurate. (My Electron microwave will not start. It is plugged in and the breaker has been checked. This microwave was purchased…. ) I wish I knew better how to write creatively; that my stories didn’t turn into shopping lists and spreadsheets.

I am overjoyed to read good creative writing in book format. Thank you and carry on!

Thanks, Marianne. I think what made me a writer despite my academic training, was my love of reading and addiction to fiction. And writing letters, where I wasn’t trying to do anything except be myself and connect with friends and family — I wrote different letters depending on who they were for — helped me to develop my “writer’s voice.”

Anne – Is the Quebec pic of Chateau Frontenac? So glad your solo trip led to the writing urge. My writing urge got its start on a bus to work in the midst of an energy crisis.

Yes, Binnie that’s the place, all right. And I like the start of your writing urge — interesting things can happen when the usual things we rely on break down. I was stuck on a tram one time and ended up making a friend.