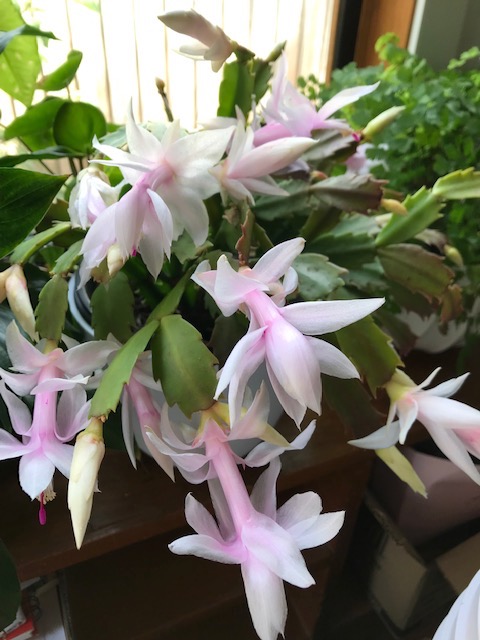 A friend dropped in at the end of moving day and brought me a couple of zygocactuses that she had divided from her own plants. One is coming into bud and the other has just started flowering, and it’s so gorgeous so I brought it inside. That’s it on the left.

Mum grew zygocactuses but all of hers were the same hot pink and I never knew they came in different colors. This one is soft baby pink and each morning it has more flowers. Don’t you love how small things can make you smile?

I don’t have the wide windowsills of my old house, where the plants thrived in the morning sun, but I have put a low bookshelf under my bedroom window and filled the top with my plants and they cheer me up each morning.

It faces west, though, and I’ll have to find somewhere else for them come summer or they’ll get scorched. But in the meantime, it’s lovely to wake up to flowers and plants.

This new house also has four large planter boxes and I’m going to grow vegies in them. They already have some herbs — amazingly a couple of basil plants are still going strong, despite the cold — and when I bought the house 3 months ago, it had tomatoes growing in one of them. I’m planning to plant broad beans in that one (because you shouldn’t grow tomatoes in the same place twice in a row). 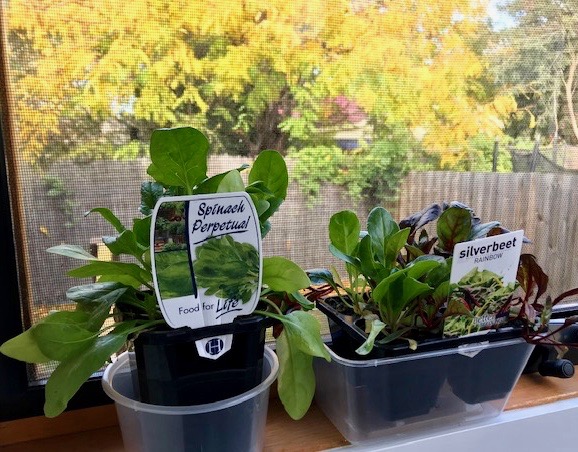 I also have something called perpetual spinach, and a variety of silver beet seedlings. They’re currently sitting in the window and I’ll plant them as soon as I get a moment. I love winter greens.

When spring approaches I’ll be planting more vegies. I’m thinking maybe even potatoes. I grew them a couple of times in the old house and had several wonderful crops of potatoes.

Isn’t it funny how a new situation can spark you up? My old garden was much bigger and was getting a bit out of control (i hear my friends snorting at that understatement) but this one is small and very manageable. Milly isn’t impressed, though — there are no creepers to hide under, and scare critters from and no colonies of little skinks (tiny, sweet lizards) that she used to watch with fascination.

And though I hear magpies singing most mornings — which is a truly joyous sound to wake up to — there don’t seem to be many other birds in this garden. I’m hoping to change that, though, Stay tuned. And if you want to hear the sound Australian magpies make (they’re not the same as magpies from other countries) click here: https://www.youtube.com/watch?v=Rf0MdT-hMkA

Christmas cactus! That’s what we call them here. I have a lovely blood red one that hangs in my doorwall since I have no sills to put any plants on. I also have Loaner Cat so have to be careful where any plants are placed since I don’t want her getting into any of them. It sounds like you’re settling in nicely. Moving can be exciting or troubling so I’m glad it’s an adventure for you. Lovely sounds your Magpies make! I get awakened to Sandhill Cranes, usually about 30 feet from my back window in the yard, around 5:30… Read more »

Yes, Mum called them Christmas Cactuses too, but they don’t flower at Christmas here, which is in the summer, so I stick with zygocactus. The blood red one sounds wonderful. Now I know they come in a variety of colors I’ll keep an eye out. As for moving being either exciting or troubling, I have to admit it’s both — finding the right place for everything is a challenge, and I can’t find some of the things I really need! But I’ll get there, and it is a lovely house. Thanks for the video of the sandhill cranes — what… Read more »

Love the magpies! Thanks! Our loudest bird here in my backyard in N. Michigan is the cardinal. They are here year-round and have a distinctive call. I’d know it anywhere.

Thanks, Linnea. I’m enjoying looking up these various birds — what a pretty sound the cardinal makes. Very nice to wake up to. I love the magpie warble I get here, but I have to say I also miss the sound of the rainbow lorikeets that often used to wake me in the old house. Maybe when my silver princess eucalyptus comes into flower they will visit. I hope so.

My “Christmas” cactuses often had a early set of blossom in November, more for Christmas and sometimes some for Easter! Mine are fuchsia, but didn’t bloom the last couple of years. I’m afraid they thrive on neglect and I must have overwatered them while sitting around the house during the worst of COVID. I found out there is a “Thanksgiving cactus” so now I’m not sure what I have. Thanksgiving in the states is the 4th Thursday in November, so your plants are right on track for the Southern Hemisphere. Yours are beautiful shade of pink! BTW my parakeet (budgie)… Read more »

Thanks, Robin. I will be sure not to overwater mine. I read somewhere that magpies in Europe (or somewhere — I’ve forgotten exactly where) attack other birds, but I’ve never heard of that with Australian magpies. They can however swoop at people who are close to their nests during nesting season, which is a bit scary. But in general they are lovely. I have a friend who throws feed out for them in her back yard, and they bring their babies back year after year to visit. Young magpies are scruffy, awkward, clumsy and endearing. My friend gets lots of… Read more »