Miss Fisher and the Crypt of Tears

I saw the Phrynne Fisher movie yesterday — Miss Fisher and the Crypt of Tears — which has just launched.
It was a special showing by Sisters In Crime Australia, with Kerry Greenwood (author) and Fiona Eagger, the producer of the film. We were shown a short film of the making of the movie, and then the movie, after which Fiona and Kerry were interviewed and took questions from the audience. 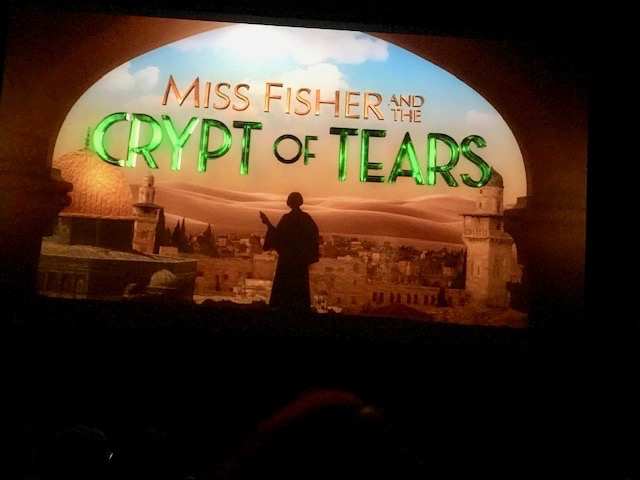 My photos aren’t very good — iphone pics taken in the dark from the audience, but here is the opening of the movie taken as it happened, and below that is a pic of  Fiona Eagger, Kerry Greenwood (in the hat) and Sue Turnbull interviewing them. 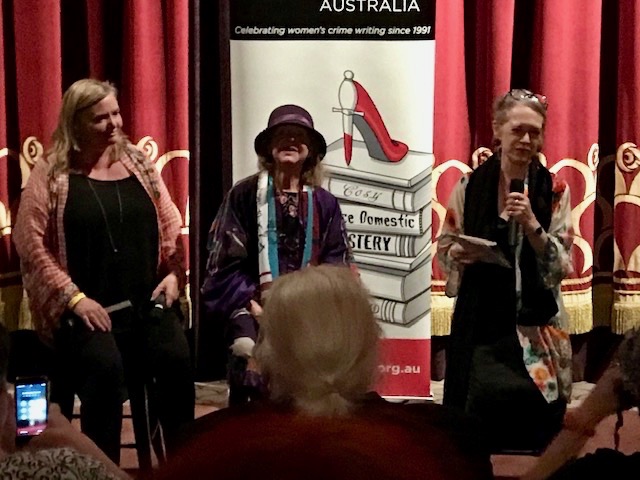 It was very much a friendly audience — a lot of people there had contributed to the crowd funding that helped finance the movie. There were even people who’d flown over from the USA to be at the launch, some of whom had originally flown to Melbourne during the filming to be in the movie as extras in the crowd scenes. Talk about Miss Fisher SuperFans! And what a fun thing to do. 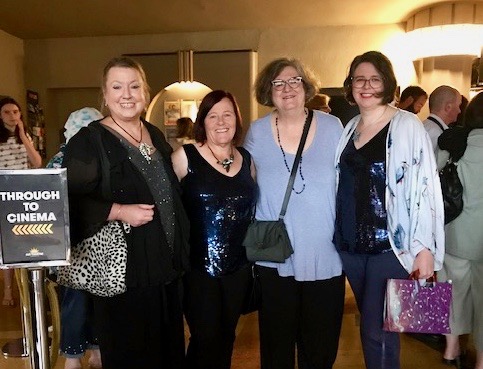 The event was held at The Sun Theatre, a small local cinema, run by a couple who had also invested in the movie. And we were encouraged to dress up a bit — my friends and I wore  sparkly tops and I wore my art deco dangly sparkly tiger necklace. Champagne was served and in the bar, you could apparently buy a specially invented cocktail called the Phrynne. Not sure what’s in it though coz I didn’t have it.

Miss Fisher and the Crypt of Tears is charming, silly and a LOT of fun. It’s a kind of Indiana Jones with Fabulous Frocks, although the frocks are not quite as fabulous as the ones in the TV series, alas. But this was a movie made on a relative shoestring — and it shows in places. But it’s still fun.

There’s some fabulous sexual tension between Phrynne and Jack the policeman, too, and lots of lovely tongue-in-cheek subtle interplay that got plenty of laughs from the audience. A light-hearted movie to sit back and smile though. Fans of the Miss Fisher books and TV series will LOVE it. 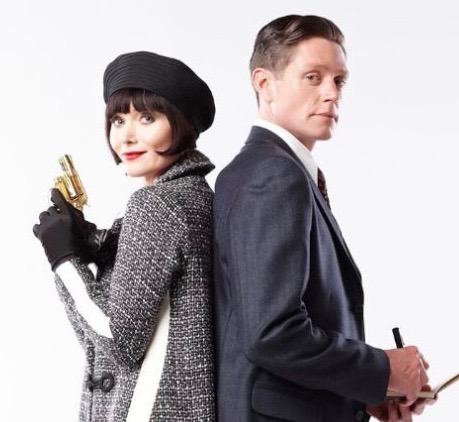 Some Australian critics have panned it pretty fiercely, very much scornful of the silliness of it and criticizing the clichés, without realizing that Deb Cox (the writer) is playing with the clichés deliberately and inviting the audience to play along — which we all did. There’s a lot of tongue-in-cheek humor and lots of laughs. The critics are not seeing the fun of it at all. A little bit like literary critics talking about romance, unable to hide the sneers. Pooh to them all, I say! Their loss.

WOW how exciting to be at the launch, we went to see this during the week and loved it and it was my first viewing of Miss Fisher I have never seen any of the TV shows, but I do look forward to more :)

Helen, I think you’d love the TV series. The fashions are even more gorgeous and glamorous, and you get to watch the whole slow build-up between Phrynne and Jack.

It sounds wonderful and I’m looking forward to taking my man to see it in Gold Class!

I like this series I used to watch it a lot. It’s hard to find now since we changed providers.

Heather, I hope you can get to see the movie.

Yes, I enjoyed it also … the quicksand incident and the throwing of the spanner into the works in particular. The movie is playing at the indie cinema near me in New Farm, Brisbane, and had a warmly appreciative audience.

Yes, the quicksand and the spanner were so silly—and such fun, weren’t they? I’m glad the New Farm audience appreciated it.

They should have never cancelled the series! I loved it. I admit, I’d have liked to see Jack kiss her earlier in the series, but that kiss! Oooh la la! Is this a bit of a regression? Please tell me no. Right now, it’s only at the Michigan Theater which is in A2 and that’s a bit of a drive for me. I’m hoping it gets wider distribution. And yes, the critics are panning it here as well, but most of the movies they love, I can’t stand so I’m sure it will do really well. Maybe it will spur… Read more »

Theo, a big part of the difficulty in making another TV series is that the actress who plays Phrynne, (Essie Summers) now lives in London, and has a lot of work on (not surprising, as she’s a good actress). But that makes it difficult for her to come to Australia for the long period it takes to make a TV series. The filming of the movie had to be very quick, for that same reason.

Theo, a big part of the difficulty in making another TV series is that the actress who plays Phrynne, (Essie Davis) now lives in London, and has a lot of work on (not surprising, as she’s a good actress). But that makes it difficult for her to come to Australia for the long period it takes to make a TV series. The filming of the movie had to be very quick, for that same reason.

Anne-Thanks so much for the heads up about the new Miss Fisher movie. I hope the movie will be shown in the United States.

Anne-I should add that I love the Miss Fisher TV series, which was shown on our public television network.

Indiana Jones with fabulous frocks is exactly right. Tongue-in-cheek and with a few jabs here and there. Loved it. Especially proud of its Australian producers etc. Polished. They all seemed so at home with the camel riding. Must have practised a lot!

I loved the Miss Fisher series, and I wonder when/if the movie will be released in the U.S. Just asking for our audience in Oregon. Any idea, anyone?