Giving up on the news

A while ago I stopped reading or watching the news every day. It used to be my habit to start the day with a cup of coffee and the news, but gradually I started to realize that all it did was leave me depressed and frustrated about things I couldn’t change.

So I did what to my family and friends was the unthinkable, and went cold turkey on the news.

And it made such a difference to my day.  I still had my morning habit to appease, so I’ve been finding blogs to read instead that are interesting and relevant and yet don’t bring me down. 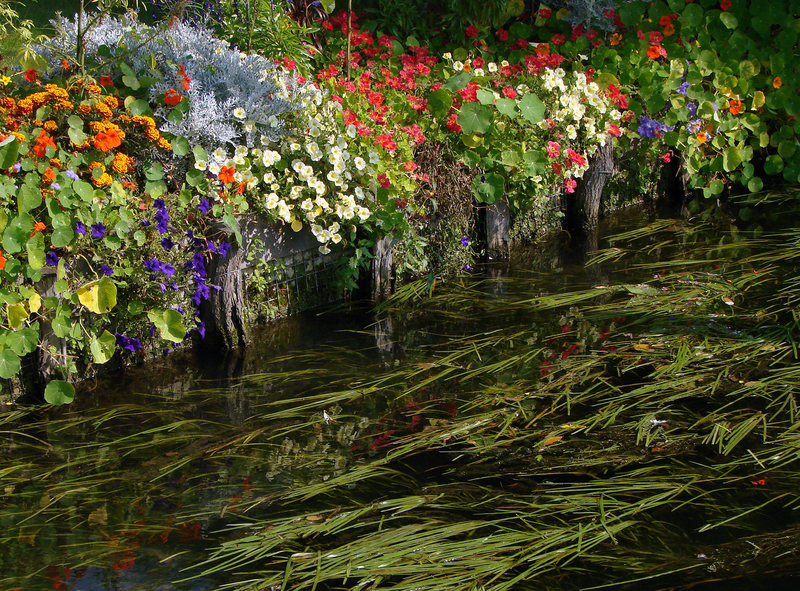 I’m not saying I’ve stuck my head in the sand — I still end up keeping abreast of current affairs — things filter through anyway, and my friends like to talk about the state of the world, and sometimes I hear something and will look up more about it — but it’s no longer part of my morning ritual, and I feel happier for it.

This is one of the blogs I subscribe to. It has articles from all over the world, often quirky and interesting little stories. Here, for instance is one about the “floating gardens” of Amiens in France.  It’s a lovely article about how for hundreds of years, the marshy land near Amiens has been turned into agricultural land surrounded by canals. Here’s a photo (by VASSILCC-BY-3.0)

Now I’ve heard of the town of Amiens, but only because there was a short-lived Peace of Amiens in the middle of the Napoleonic wars.

the Peace was signed (1802) people in the UK thought the war was all over, and would-be travelers, starved of foreign travel, first because of The French Revolution and then the rise of Napoleon, headed for Paris and the Continent to begin their Grand Tour. But it soon became clear that the treaty was not being honored by either side — Britain insisted Napoleon was using the peace to reorganize his control of Europe and prepare for war, but they were also breaking the agreement. By 1803 the war was on again. Some tourists were trapped, some fled and escaped, others were interned or required to give their parole.

I used this situation as the background for my second novel — Tallie’s Knight. In it, Tallie, who was more or less ‘annexed’ by Magnus, the Earl of D’Arenville in a convenient marriage, ends up agreeing to the marriage, but only if she can go on the Grand Tour for their honeymoon. So off they go — but when they reached Italy, they heard that Napoleon’s troops had invaded the Piedmont, and so they had to flee. . .

So now, thanks to this blog I know two things about Amiens, and one day I hope to visit their beautiful floating gardens. And isn’t that thought so much better than dwelling on depressing news?

I’m still listening but only on WJR AM 760 which is our local AM channel out of Detroit. I listen on Alexa because we’re too far out to get a good signal. Dick Haefner is in charge of their news department and delivers the news without commentary and without opinion. It’s refreshing. And he does it in 5 minute bites twice an hour. That’s about as much as I can stand. I’ve unplugged my landline. Did that about two months ago now. If it’s a legitimate call, they’ll leave a message. Out of the 30+ calls I get every day,… Read more »

Theo, I’m with you on both the news and the phone calls. I suppose you’re getting lots of election calls at the moment. I hate that! So many intrusive calls. I have an answering machine on my landline and I let it pick up automatically. The nuisances hang up straight away. My friends know to start speaking and then I will answer, but it’s funny, my machine collects all these calls that start “Anne, are you there? It’s me. Pick up!”
Am I becoming a hermit? It’s possible. LOL

Anne – I watch the 4 pm news every afternoon and the 11 pm news each evening. I will admit to sometimes turning down the sound if things get too grim. And my (possessed) phone has a plethora of news items that I could indulge in if I want to get depressed. Frankly, I much prefer the site called The Court Jeweller. Highly recommended and very entertaining. Today’s news was very depressing: I learned that my favorite restaurant burned down yesterday. No one was hurt, thank G-d. As to the election – I don’t get calls: I get texts from… Read more »