Last weekend I visited the little former gold-rush town of Clunes, in central Victoria, to attend a book event. Clunes, as well as being a pretty little historic town, has also reinvented itself as a “BookTown” which I think was a brilliant move. I blogged about my visit on the WordWenches so you can read it there, but I had a lot more photos that I want to share that I couldn’t fit on that blog. So here goes: 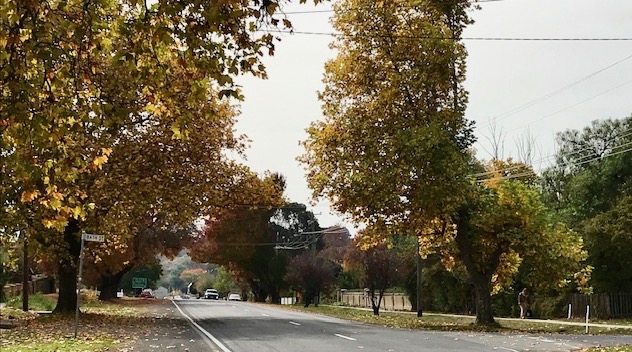 When the beige-gold late summer/autumn paddocks, and grey-green eucalyptus forests give way to autumn color, you know you’re getting close to a town or settlement. Australian native vegetation isn’t generally deciduous and doesn’t change color in autumn, so the trees and shrubs that do are exotic (imported) species generally planted by early settlers who wanted a taste of “home

This photo was taken entering the town of Clunes.

I didn’t take this photo of some of the shops in Clunes — my photos all have cars parked in front of the shops and buildings, and I couldn’t get a clear shot, so I couldn’t resist “borrowing” this one to give you a sense of the historic feel of the town.  I think this was taken some years ago. 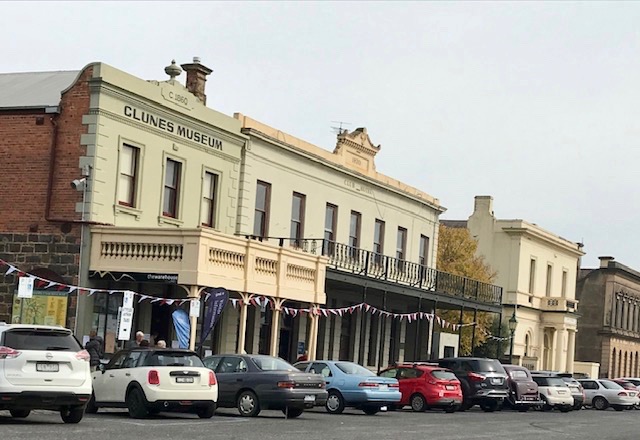 This is another pic of some of the shops in the main street— note the stone and brick construction, again signalling how very prosperous Clunes was after the gold rush.

Most of them are well-preserved historic buildings. There were several very good cafes and restaurants, a number of craft and tourist-style shows and of course the usual kind of shop that any town needs for its residents. 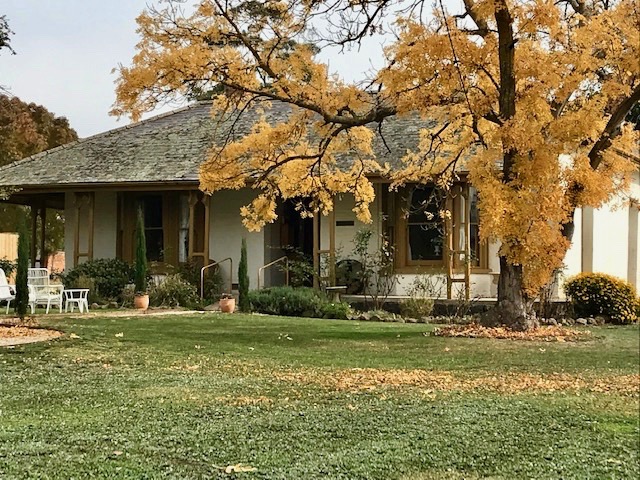 I took quite a few photos of some of the pretty houses around town. Don’t you love the aged slate roofing tiles?

It’s a classic old Australian style, with a veranda going right around the house, or at least on three sides, which helps keep the house cool in summer.

I lived in a house like this when I was 10 and 11 years old, and I loved the verandah so much. 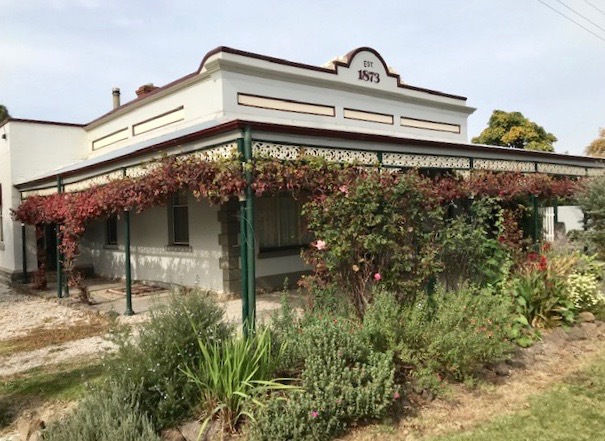 Here’s another house I liked.

Built in 1873, it was obviously built by a prosperous miner, not only because it’s made of brick, but that wrought around around the veranda was quite expensive. 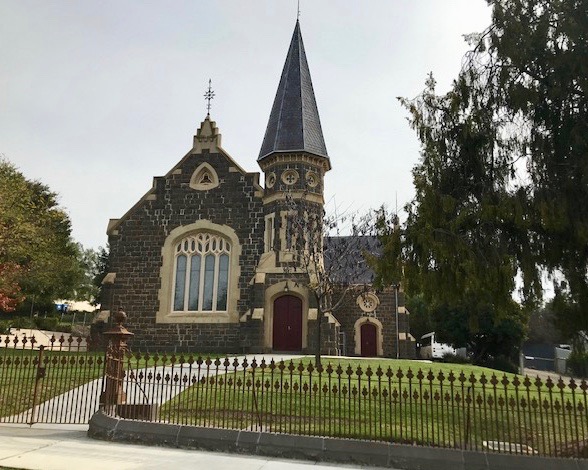 There were several magnificent old bluestone churches — Catholic, Protestant and Anglican — a sign of how very prosperous the town was after the gold rush.

One of them was in the process of renovation — another sign of how prosperity is returning to the town. 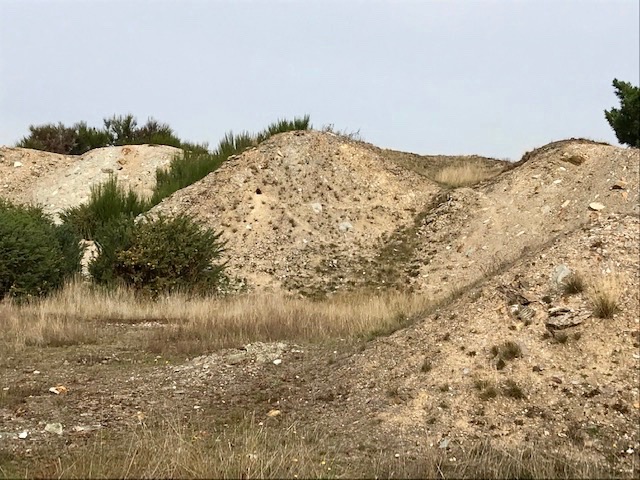 There are still a few signs of the gold mining left around the town — here are a some mullock heaps — piles of dirt and rocks left after being dig up and mined for gold.

You can often see these in the countryside near old gold towns, a remnant of the times. The mine holes will be covered up for safety reasons, but I’m not sure why these mullock heaps remain — perhaps because they’re also a historic reminder.

I couldn’t help peering closely at them just in case I spotted a few gleaming specks of gold in the glorious autumn sunshine. But alas, it was all worked out years ago. 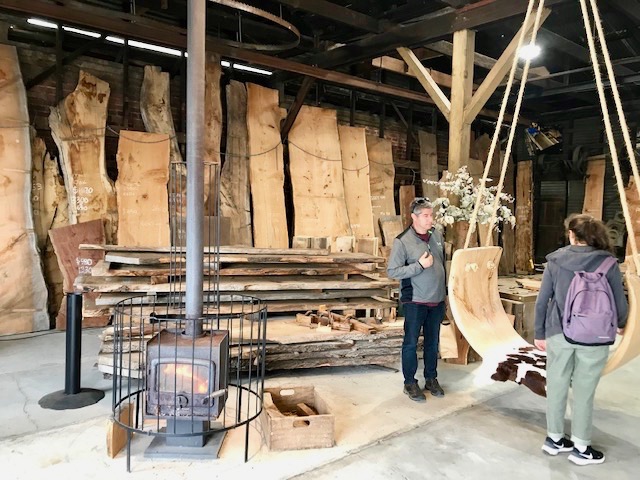 I loved this big old warehouse in the main street, where huge slabs of native wood were stored, waiting to be bought and polished up and made into table tops or benches.

I love this kind of thing and would love to have a table of a bench with a top like this.

And though it wasn’t really cold, it was nice to have the fire going. Quite a few places had fires going, for the atmosphere as much as anything. I love a real fire, don’t you? 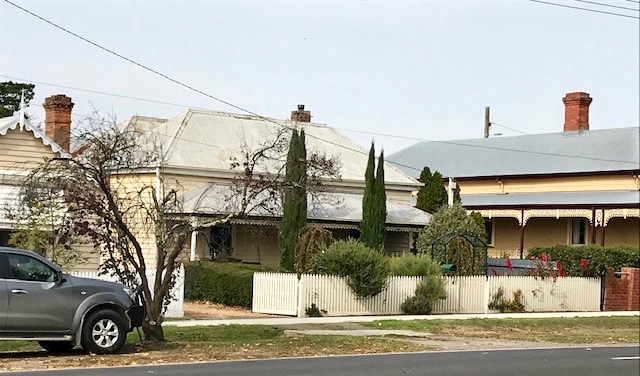 Here are a few more Clunes houses and these are the sort of pretty old houses you’ll find anywhere in Victoria — in the suburbs of Melbourne, in small country towns and regional cities.

Weatherboard (wood) with corrugated iron roofs, verandas and iron lace or decorative woodwork. And mostly single story — we don’t go for double story houses here very much, except in the city where double storied terrace houses were all the rage in the 1880’s. A lot of the modern house are double story too, but they’re not nearly as pretty in my view. And very few of them have verandas, which I think is a shame. 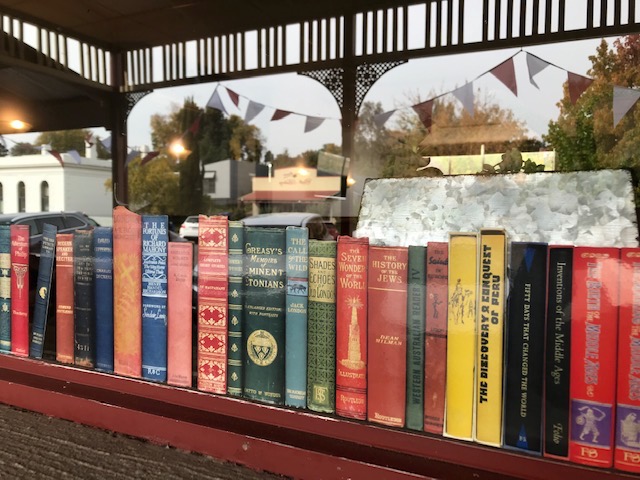 So that’s it, my visit to lovely Clunes BookTown. I hope you enjoyed it.

If you want to see more photos of Clunes, go to my Word Wenches blog. 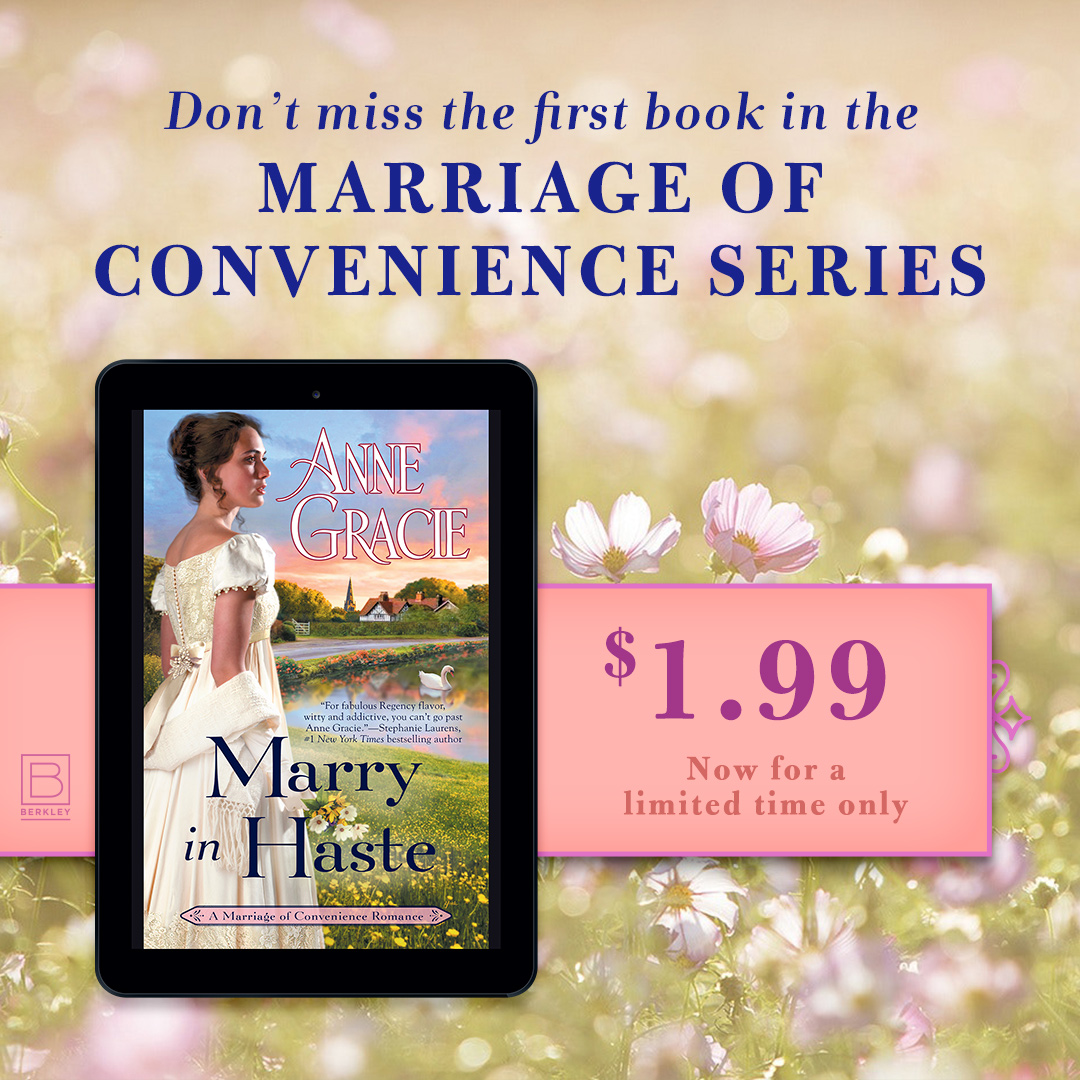 A sneak peek at my new cover

In August I have a new book coming out, The Scoundrel’s Daughter. It’s the first in a new series called The Brides of Bellaire Gardens and it’s based around a large garden that is shared by the residents whose houses surround it. 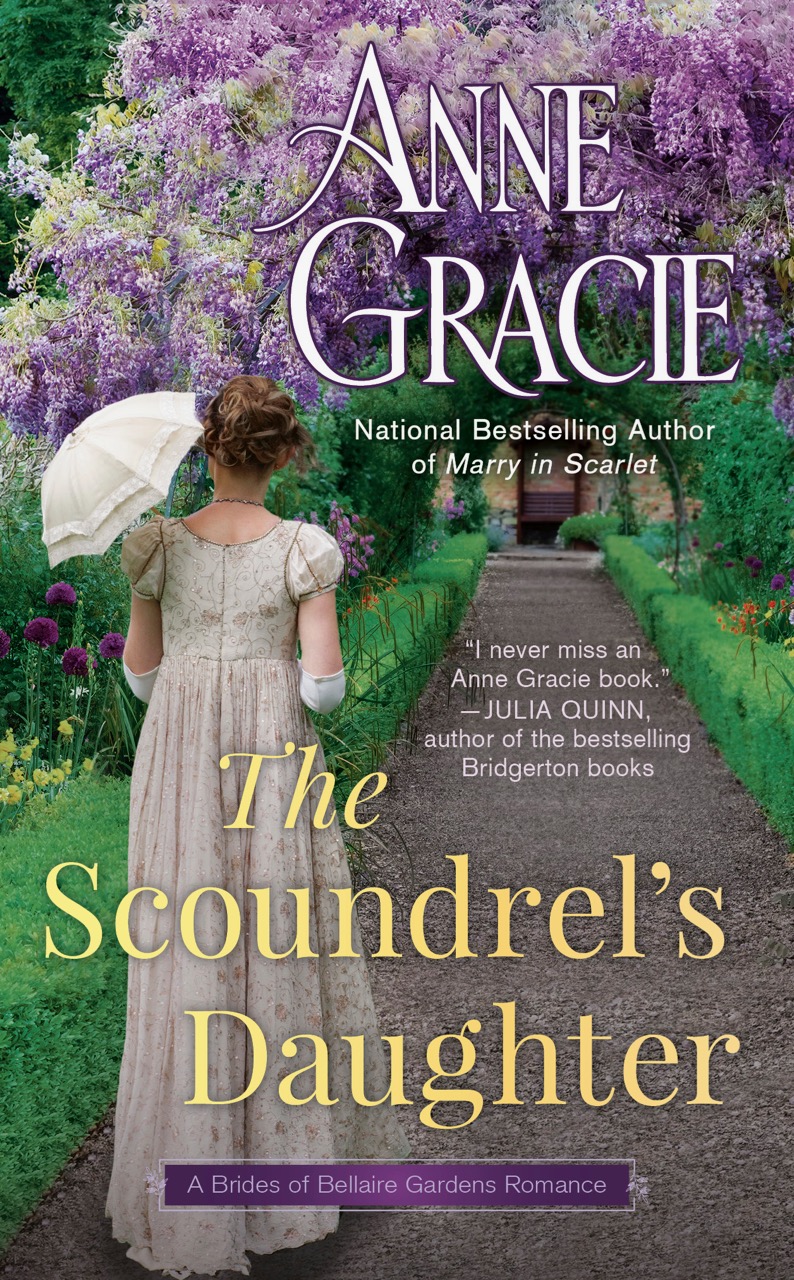 Historically that set-up is a little anachronistic. That style of garden, completely enclosed by houses, did not become popular in London until a few years later, but I figured since it’s a fictional garden, I could have my fictional characters live there

Obviously I wanted a garden background for my cover, and I suggested a wisteria arch, and lo! the wonderful Berkley cover designers came up with this beauty. Isn’t it gorgeous?

I’m thrilled to bits with it.

At the moment, I’m only sharing the cover with my newsletter and blog subscribers, but there might be a cover reveal in other places — I’m not sure.

But I’ve only put it up here on my blog and also sent it to my newsletter subscribers, so you’re the first to see it. I hope you like it as much as I do.

You can pre-order The Scoundrel’s Daughter. Amazon.com  (which still has the all black cover (smile) )
UniversalLink