The Australian Romance Readers Association had their 13th Annual Awards night on Saturday, and I was delighted to find my book, Marry In Scarlet (aka George and the duke) won Favourite Historical Romance. 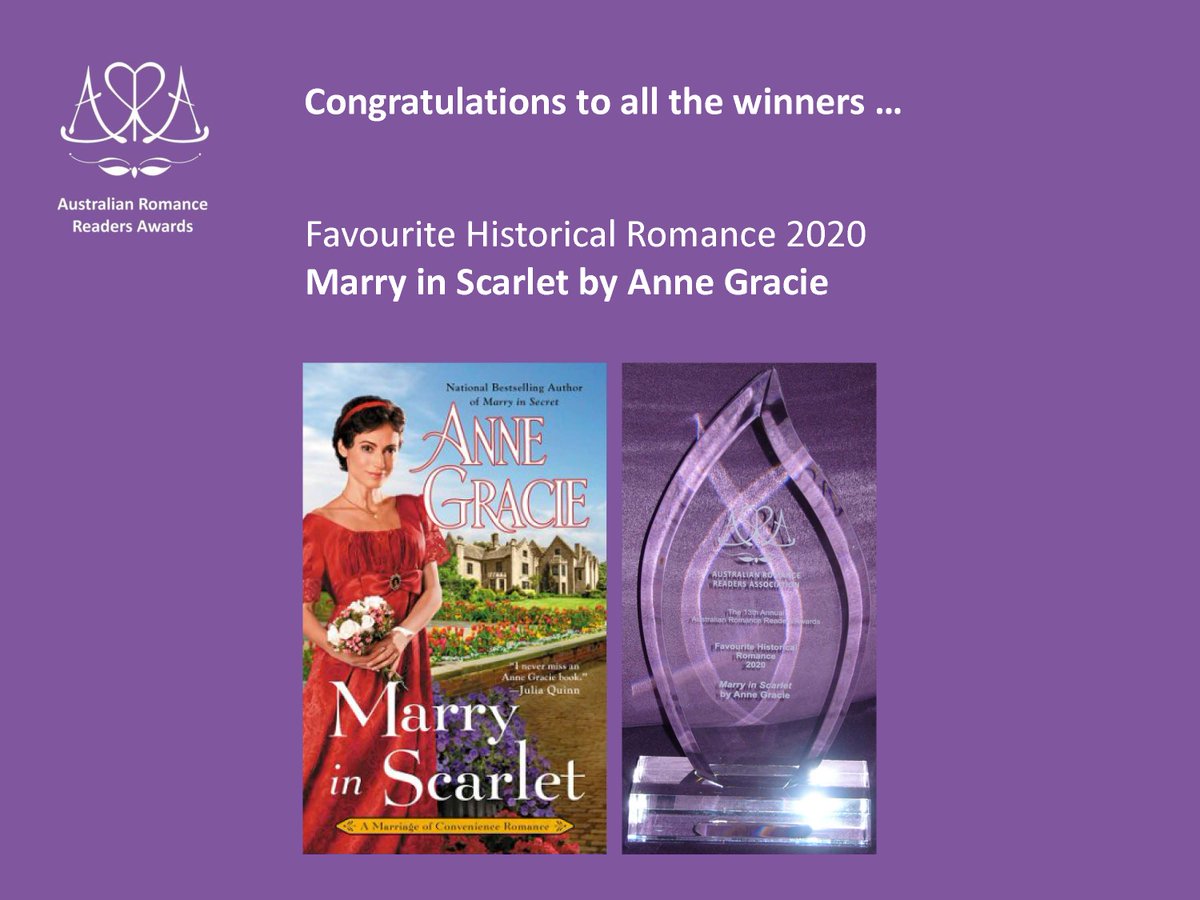 The other winners are listed here.

Usually this event is held in Sydney, in a lovely old hotel and it’s an annual highlight for me, not least because I get to catch up with a whole lot of friends — readers as well as writers. And in fact, last year, the last time I saw most of these people was at the last ARRA awards night, in early March 2020. I went out to dinner with a group of writer friends, and practically the following day my city (Melbourne) went into Lockdown). 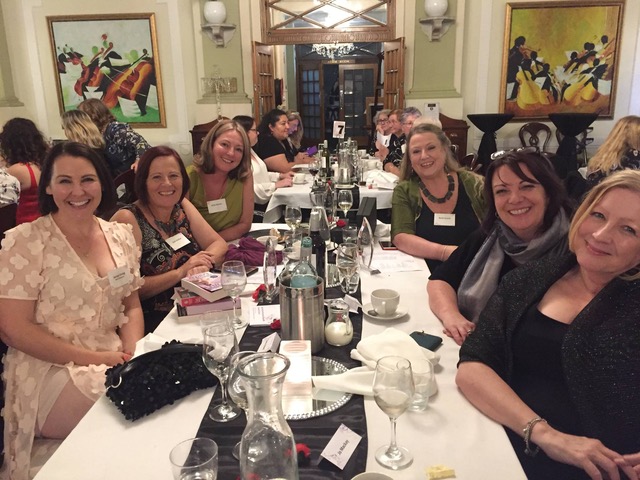 The pic on the right is of our table in 2019 — Keri Arthur, Kelly Hunter  and I  always sit together at ARRA dinners and there’s invariably a VSP (Very Silly Photo) or three taken. But I’m holding them for future blackmail purposes so here’s a nice one instead of us in the dining room at the Castlereagh Hotel. (Photo taken by Kariss Stone.)

So this year, as has become normal for many of us, the event was run through Zoom, with us all sitting at home, waving to small square pics of friends on the screen. Nevertheless it was a wonderful night. I always enjoy awards nights, seeing people’s faces light up when their names are called, joining in with the clapping and cheering, seeing new writers receive their first public recognition — and discovering new-to-me writers and books to read. 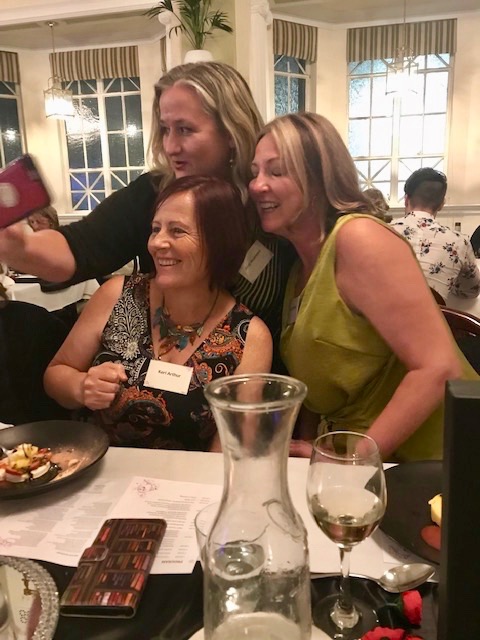 I remember one year when Kylie Scott blitzed the awards, and I sat in the audience clapping away as she received yet another award, thinking, ‘Who is this Kylie Scott and why haven’t I read her?’ So of course, I bought one of her winning books, and ah, I understood why she’d won so many awards that night. I  gobbled up her backlist and she’s been an auto-buy author for me ever since.

(The pic on the left is of Amy Andrews (standing) — who blitzed this year’s awards — with Keri Arthur and Kelly Hunter attempting selfies.)

The ARRA awards are voted on by readers, but they’re not the kind of award where anyone can vote — only ARRA members. And authors are not allowed to vote for their own books either. I really like that system. It completely avoids the “competitions” where there’s a social media frenzy with authors begging readers to “vote for me” (which I never do). So I always find the ARRA finalist and winner choices  worth noting. 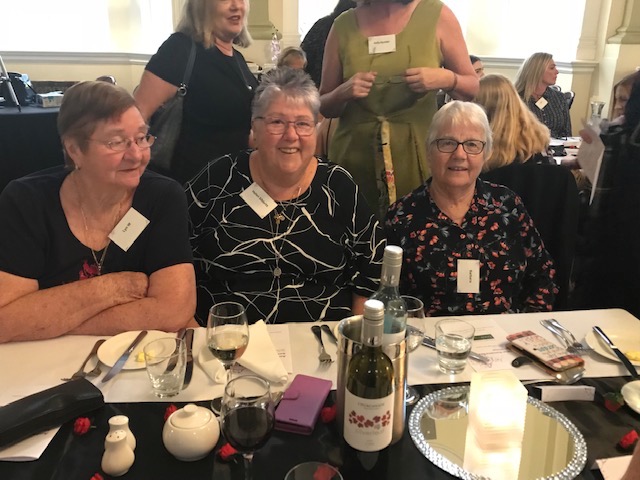 And below that, some more fabulous ARRA members (Sydney, Melbourne and Wollongong) at an afternoon tea held a few years ago. I’m in there, too, second from the front on the right, in teal and black. The afternoon teas were “meet the author” and as well as delicious cakes and savories, each table had one author and  a table of readers — my table also has a fabulous bookseller. And you can bet we all talked books, books and more books. 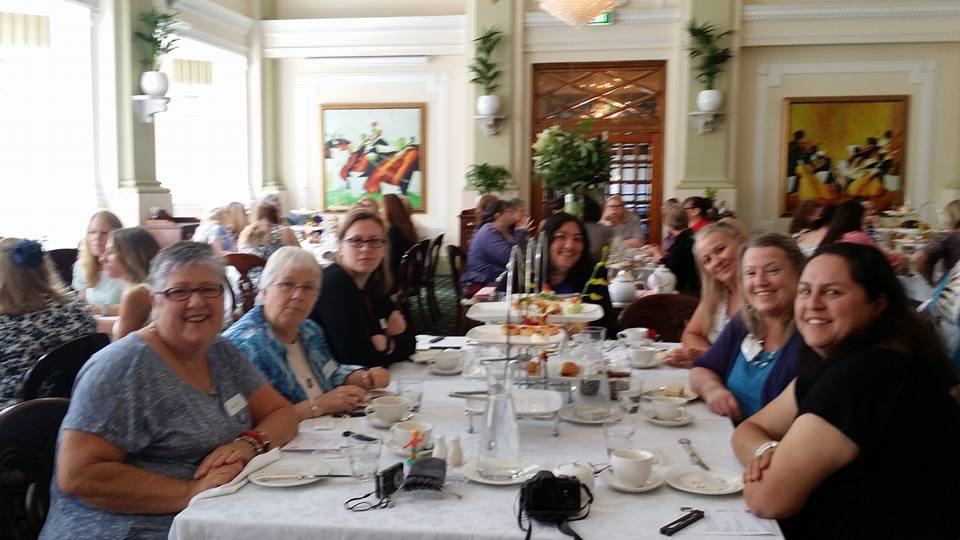 ARRA is a fabulous organization and I want to thank the organizers and members. I especially want to thank Debbie, Diane and Sharon who put the zoom presentation together so smoothly and well.

The pic below is of Shannon Curtis, Keri Arthur, Kelly Hunter and me holding our awards. Sorry, I’ve forgotten which year it was. 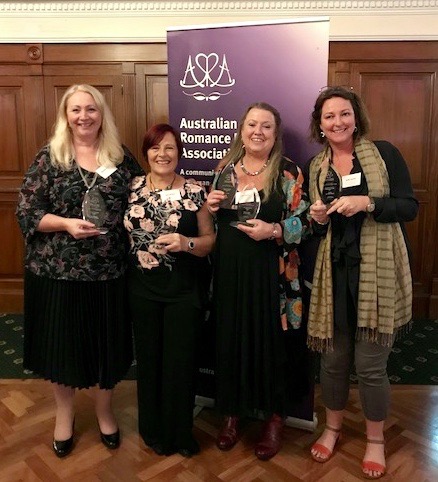 Are you a member of any reader group, formal or informal? I love talking books and reading with people. Long before I was ever a writer I was an avid and voracious reader and I still am.

Congratulations, Anne! So, so well deserved. It’s a wonderful story and I loved every word. ARRA sounds like a great organization and fair. I like that. The way it should be. :)

Thank you, Theo, much appreciated. And Happy Easter to you.

CONGRATULATIONS! I agree, you wrote a terrific book and I loved it. Glad the judges did too.

Thanks so much, Annette. I’m so pleased you liked it.