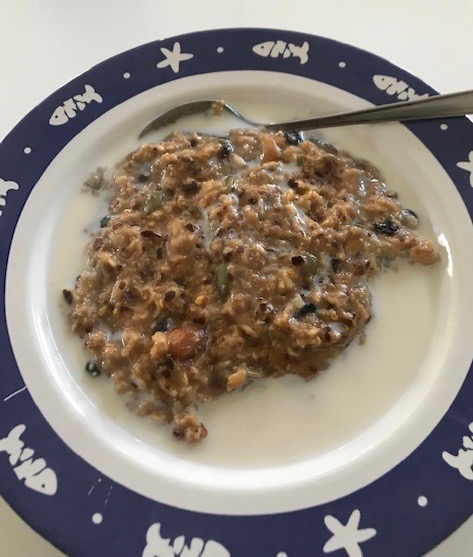 This morning, for the first time in the new house, I made porridge for breakfast. I was raised on porridge as a warming and healthy winter breakfast  — rolled oats, cooked with a little salt and served with milk and some kind of sweetener, usually brown sugar, or golden syrup or treacle. Golden syrup was my preference as a child — I liked to drizzle it over the porridge and make patterns.

But these days, I don’t have it sweetened like that, and I don’t have it plain, either.  It’s still cooked with a little salt, but I also add in things like seeds and nuts and LSA (ground linseed, sunflower seeds and almonds) and any sweetness comes from dried fruit and whatever in that line takes my fancy. I call it “porridge with bits.” In my pantry I have a line of blue-topped jars that I filled myself, and I pick and choose from them. The contents vary. 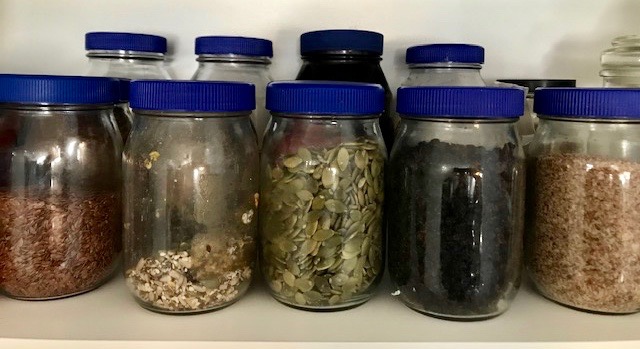 This morning I tipped in something that I didn’t recognize from a blue-topped jar in my new pantry. But I sniffed it and though I still had no idea what it was, it smelled lovely and slightly sweet, so I tipped half a lidful in, along with the usual bits and pieces. The porridge turned a pleasing cinnamon brown instead of the usual greyish beige. That’s it in the pic at the top. Yum yum, right?.

But when I ate it . . . heat! Lots of heat! Chilli-type heat! Much more warming than your average porridge!

Of course, the large delicious-smelling jar with the tiny reddish brown bits was a jar of chilli flakes and chilli seeds. I love chilli, but not for breakfast. Usually I keep a few different kinds of chilli in small jars. I have no idea when or where I bought such a large quantity. And when I looked closer, the blue lid was not the same kind of lid that I keep the porridge bits in.

This, my friends, is what happens when you get to an age of needing glasses after a lifetime of not needing them. I only put them on when I think I need them. But the truth is, I need them more often than I think I do. Is it vanity? Or laziness? I don’t know. All I know is that I should have been wearing them this morning.

Anyway, I made a new batch of porridge, and it was lovely, though not quite as tasty or as warming as the first. And I’ll be storing the large chilli-flake jar in a different corner, and maybe even putting a label on it.

Tags: Food, Seasons, slices of life, Wearing glasses — or not!

Oh, Anne! I’m sorry, but I laughed at that one. I’ve been wearing progressive lenses for a long, long time. Even after I had lasik surgery, I still needed reading glasses. The surgery only lasted a little less than five years and I was back in glasses, so I gave up. But I know what happens when you ‘take a chance’ ;) What I did do when I wore contacts though after the surgery was, I had my sunglasses made with no prescription on top and then my reading script on the bottom. That way, I wore my contacts still… Read more »

Theo, don’t apologise — you were meant to laugh at my ridiculous mistake. I did too. I’m resigned to needing glasses more often — I always wear them for reading — but for the moment in most everyday situations I still peer and squint. But I’ll check the contents of strange jars more carefully in future. <g>

LOL!!! Having worn glasses since I was 10, now into progressive bifocals, and unable to read the clock on my nightstand until I put them on, I did have to laugh at your dilemma, Anne! But at least it is a correctable mistake – I definitely go for a label on the chili jar! Maybe before you moved, that jar was in a totally different section of your pantry!

Constance, it would definitely have been on a different shelf in my old pantry. I still haven’t arranged the new one to my satisfaction. It looks very nice, but it’s not as user friendly as the old one, as the jars are sometimes 6 deep, whereas the most my old walk-in pantry went was 2 deep.

That must have tasted terrible. At least is was not something expensive that got ruined. I never cared for cooked porridge, probably because the ones we had when I was little was so slimy. Later my family had uncooked oatmeal flakes with nuts milk and resins. We also would roast the oat flakes which made it even better. By all means label those jars as I know they are hard to identify by smell and looks. We are having a lovely summer so far. Could use more rain for the crops around me. I live in Indiana, USA We gave… Read more »

When my father passed away, we found 14 pair of readers in spots where he might need them. My husband is getting close! I need glasses to drive, but never wore them in the house much before I needed them to read. They are easier to keep track of when they’re on my face. The challenge will be when I need them to comb my hair!