I just noticed that on Kindle at the moment, you can buy all the Mapp and Lucia books by EF Benson for something ridiculous, like Aust. $2.42  ($1.99 in the USA)  It’s a bargain. 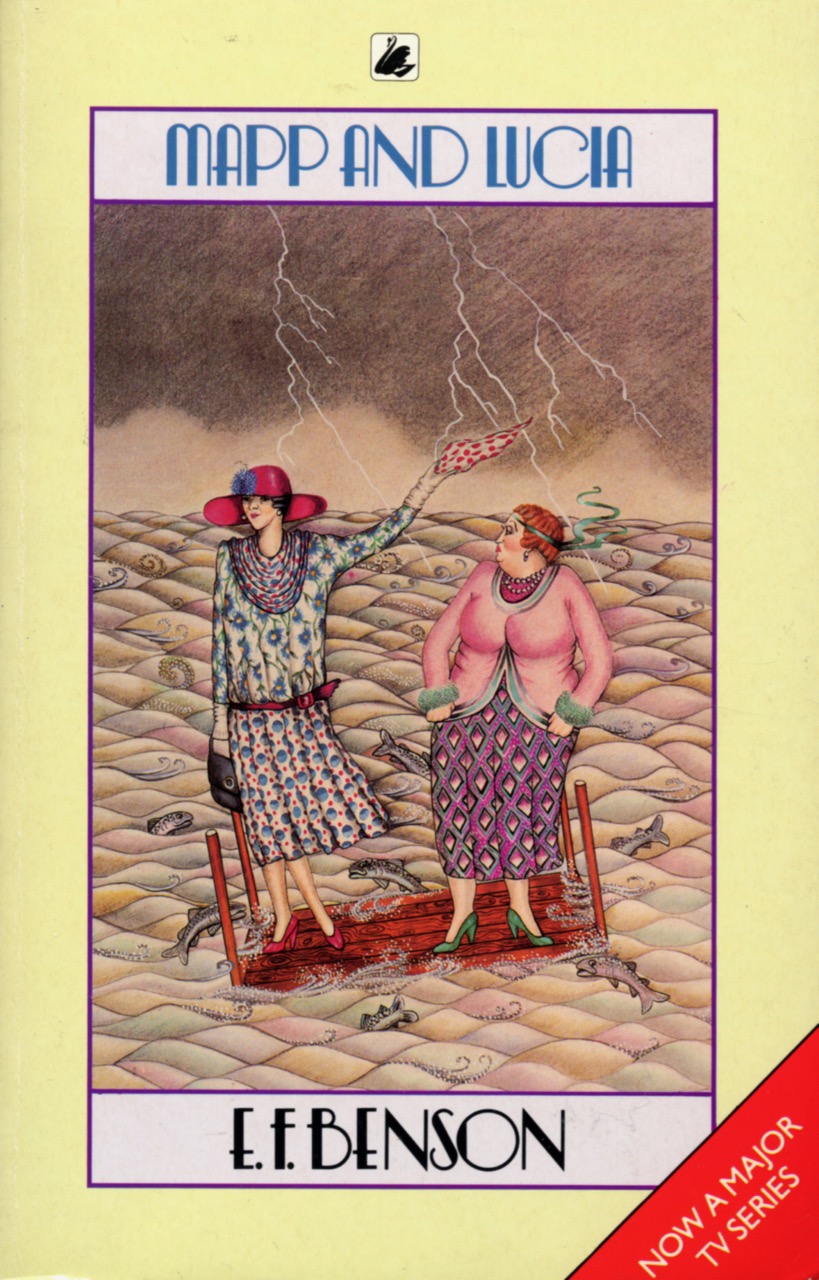 I love the Mapp and Lucia books. They’re about a small group of people in English villages in the 1930’s,  a closed social group, most of whom don’t work for a living, “who vie for social prestige and one-upmanship in an atmosphere of extreme cultural snobbery.” (From the amazon blurb)  It’s not romance,  it’s slightly satirical social comedy.

The first book in the series is pleasant with a few smiles — Lucia is beautifully pretentious, and queens it over her subjects in the most delightfully ruthless and hypocritical way. The next book gets better — more pretension, more smiles — and then, when Lucia and her gallant cicisbeo, Georgie, decide to take a holiday in the picturesque seaside village of Tilling (aka Rye) and Lucia comes up against Miss Mapp, the current “queen” of Tilling society, the sparks (and the laughs) really start to happen.

I was introduced to the books many years ago, when I was travelling, and staying at a B&B in Rye, a pretty seaside village in the south of England. (That’s Rye in the photo below) The only other guest was a young American woman my own age, and at breakfast we started talking, and realized we were both big readers (it was just before I started seriously writing) and, comparing favorite books, as book-lovers do, we realized we had quite similar tastes. 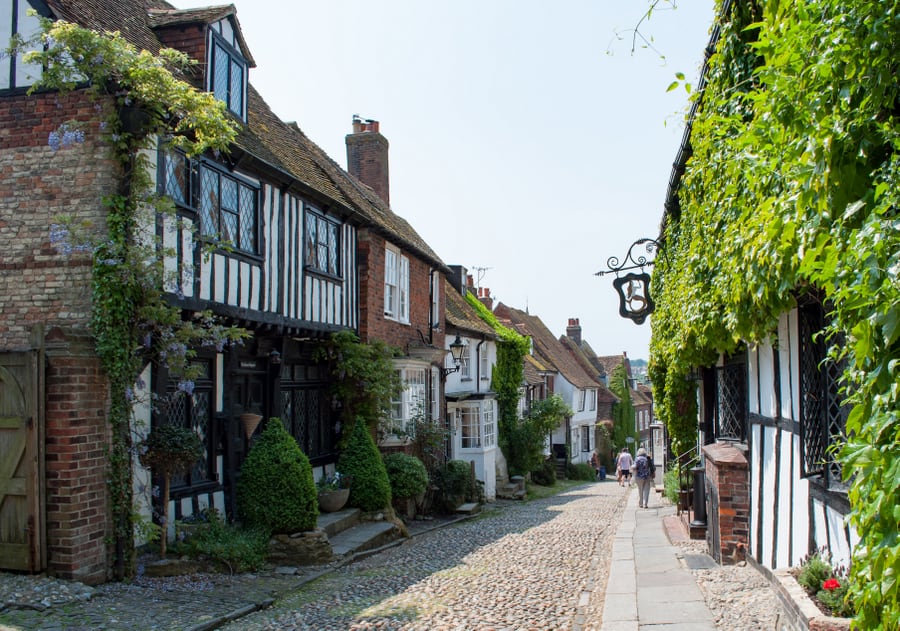 So then she said, “Of course you came to Rye because of EF Benson.”
And I said, “No. Who’s EF Benson?”
“He wrote the Mapp and Lucia books.”
“Never heard of them,” sez me.

She was deeeeeply shocked at such ignorance, <g> and after breakfast marched me up the hill to the local bookshop, and stood over me until I bought the first book in the Mapp & Lucia series. The bookshop had masses of copies of all the books — apparently Rye (and the bookshop) was a bit of a place of pilgrimage for fans of the books. EF Benson actually lived for some years in Rye, in Lamb House, the very house in the books that first Mapp owns, and then, eventually, Lucia gets her mitts on.

I read Queen Lucia (the first book) that night, and at breakfast the next day, my American friend said, “Well? Did you read it? What did you think?”
I had to admit that while I’d enjoyed it, I didn’t really see what the fuss was about.  Which of course disappointed her.

So we headed our separate ways and I didn’t give her or the books another thought until several months later, when I was on the island of Corfu (Greek, Kerkyra) and as usual, had run out of books to read. (By this time I’d started writing.) Then one day I spotted a bookshop that had books in English! And there, amazingly, were all the other books in the Mapp and Lucia series. (There are six.) So I bought the next one, and a day or two later I walked back into town (I was staying in a little hut well out of town, near Paleokastritsa if anyone knows it) and bought the next one — and then I was hooked.

I bought them all, and brought them home with me — and since I was backpacking and had months to go of carrying them around places on my back, you can see how much I valued them. I wasn’t sure they would even be available in Australia and I didn’t want to risk not being able to reread them when I got home. I still have those copies with the Greek price stickers on them. And now I’m buying them again in kindle, so I’ll never be without them. 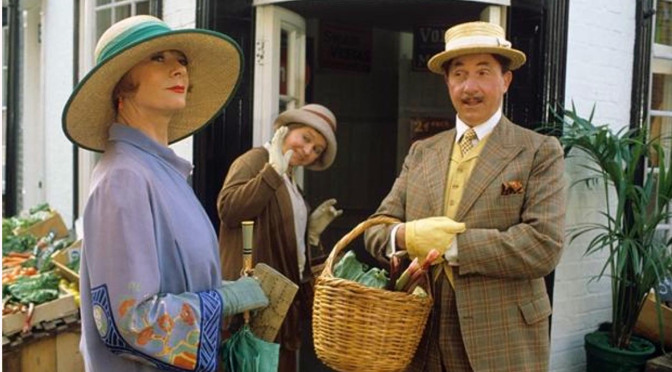 They’ve made two separate TV series out of the books, but neither one quite got it right IMO.

My fave was the first series, where they had Geraldine McEwan (later Miss Marple) as Lucia, Prunella Scales (who was Sybil in Fawlty Towers) as Mapp, and  Nigel Hawthorne (who was Humphrey in Yes Minister) as Georgie. (In the photo, that’s Lucia and Georgie in front and Mapp waving from behind)

But it was a bit slow for non-fans, and the later series didn’t work as well for me, either. But then, for real book-lovers, rare is the film or TV series that ever compares well to the books.

If you do buy the books and find you enjoy them, you might want to look for Tom Holt’s “Lucia books” especially Lucia In Wartime, which has some very funny scenes about rationing and hoarding. He wrote them to entertain his mother and her friends, who were all Lucia fans. So were Noel Coward and Gertie Lawrence, by the way, so if you do enjoy them, you’re in good company.

I have not read these, but if you’re recommending them, I just might have to try them!

I hope you enjoy them, Theo.

I just borrowed the 6 book collection from my library, really looking forward to reading them.

I hope you enjoy them Sue

I rushed to Amazon and bought the book (in the USA)- https://www.amazon.com/gp/product/B089N8NGB1/ref=dbs_a_def_rwt_hsch_vapi_tkin_p1_i0
which contains all the books together. I hope this is what you were talking about it looks delightful.

Yes Martha, that’s the one I was recommending — all six books together for such a cheap price.I hope you enjoy it.

I love this series! Love the two TV versions I’ve seen as well. Just so entertaining. I’ve been to Rye and visited Lamb House, so I can easily visualise the setting as well.

Malvina, it’s great to meet another Luciaphile. I feel so lucky that I met that American woman in my B&B and that she pointed me at the Lucia books and — I didn’t mention this in the blog — also showed me some of the various locations that pop up in the stories. I didn’t get it at first, as I’d only read the first book which isn’t set in Tilling. But I have such vivid memories of it.