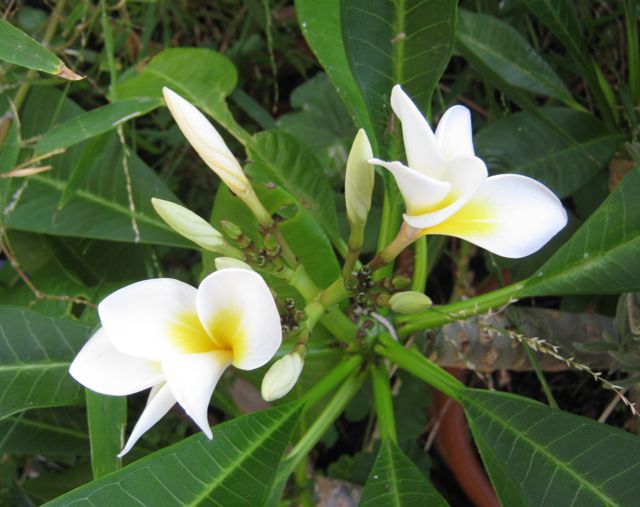 I’ve always loved frangipani (plumeria) flowers, ever since I was a kid and my big sister had them in her bridal bouquet. So pretty and such a lovely fragrance. They don’t readily grow down south (of Australia), where I live — they’re more of a tropical plant. But some people manage, and I’ve been trying for years to get one to flower — without success. It hasn’t died, but that’s the best I can say of it.

When a friend of mine moved house a few years ago, she was delighted to find an old frangipani bush growing in her garden. Several years passed but it never flowered for her. She moved it, tried planting it in a different position, but still not a bud in sight.

A few months ago, in frustration, my friend ripped her frangipani out. She was about to throw it in the green recycle bin when she decided I might want it, so she stuffed it in a plastic bag and dropped it over to me. I thought it would never grow. It was just a couple of thick old sticks, no leaves and barely a root to its name. So I bunged it in a pot at the front porch and forgot about it.

And lo . . . I have flowers! There they are in the photo above — only two so far, but more coming. And they smell divine. So at the moment at my front door I have a few late gardenias in bloom and frangipani. Bliss. 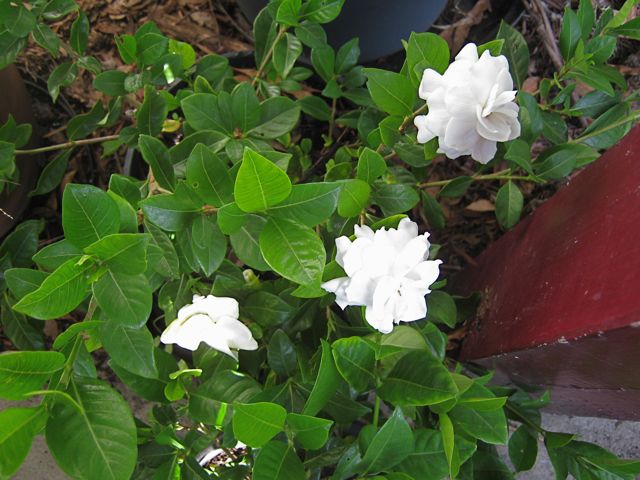 Mind you, my original frangipani has more leaves than ever this year, but not a single bud of flower. I live in hope, though, that my new plant will encourage it.

Are you a fan of fragrant flowers? What’s your favorite?

First off, congratulations on the ARRA awards! I’m so thrilled for you. And so very late in posting but it’s been a very long week. Here’s hoping this one is better.nnI LOVE Frangipani, but cannot grow them here. We had snow Saturday and it’s freezing all week this week. Just not conducive to them. They’ll grow on the sill, but only for a season then they die. I do roses. David Austin are the most fragrant and hardiest that I’ve found unless you do hedge roses. I’m building up my stash again at the new house. Slowly. I left over… Read more »

Thanks so much, Theo for the congratulations. Sorry you’ve had a tough/long week. I’m not sure I can grow frangipani here, either — both of mine are on the porch in pots. But a neighbor (my original inspiration) has a huge one in the ground that flowers every year. Gets lots of sun and is in a very sheltered position.nI love roses u2014 David Austin roses, especially. It’s a pity that the new owners don’t care about roses, but they are remarkably hardy plants. Sometimes out in the countryside here, you will see a tumbledown stone chimney u2014 and a… Read more »

Clove pinks and carnations and roses, depending on what is available.n

Fiona, I forgot that carnations are fragrant — so many of the ones you see in the florist aren’t. Same with roses. Sad, isn’t it that fragrance is sacrificed for looks and longevity.

I think putting it in the pot might have been the answer Anne. They like dry arid conditions more than anything. I had heaps of different colours when we lived in Mt Isa. Dry hot and about the only thing that grew happily without any attention what so ever. We used to break off a branch, let it dry for a few days and bung it in the ground and ignore it. Works every time. The perfume is to die for and the amount of colours these days are almost enticing me to try them again now I live in… Read more »

Thanks, Ann — I’ll try putting the one I’ve had for years in the ground in a hot, dryish spot. Can’t hurt, and since the other one flowered after being given a fright, it might work on this one, too :)

Funnily enough, Anne, I was told by an old gardener years ago if something wasn’t flowering or fruiting, to give it a shock. He suggested striking a fruit tree with a bamboo cane for example to mimic a massive storm. The plant will think its dying and madly produce. We’ve used this idea on a non-fruiting lemon tree once and it worked but may have been coincidence.

I’ve heard this, too, Ann. And here, we know when a drought is coming because all the native plants madly flower and bloom. Nature is amazing.

Hi there Anne. I think the Wimmera might just be the place to try some frangipani growing. I can’t say I’ve seen any around here. Let’s not forget about Daphne for scent (my personal favourite with its lemony sweetness). Second to that would be the Blue Moon rose. A gorgeous soft mauve with the most wonderful damask scent. My nan used to have Daphne that did so well in the Chadstone area. I’ve never had any luck.

I love daphne so much, Jay — such a glorious scent and just at the end of winter, too, to cheer you up. I’m not familiar with the scent of Blue Moon but it sounds lovely. Best of luck growing frangipani.

I love frangipanis. We had a pink and a white tree when I was growing up, which my mother tended with love. I hope your other tree blossoms for you! I love the fragrance of gardenias, but when you pick them they wilt fast, so I tend to leave them on the tree unless I’m having someone for afternoon tea that very day. Jonquils have an amazing scent, but they’re overwhelming on the table – nicer in somewhere like the bathroom! Jasmine is very heady and lovely but I’ve never succeeded in growing it; my son and DIL have it… Read more »

Malvina both my gardenia and my daphne are in pots. I’ll plant them out when I redo the garden — i’m planning some work on the house and you know what a mess that can be. I love jonquils too, but they always made my dad sneeze, so we never had them in the house when I was growing up. Now I see a bunch of earlycheers for sale and snap them up. Jasmine is almost a weed here. I’ve had mine brutally chopped back several times, and up it comes again. Same with my lavender. I’d forgotten about the… Read more »