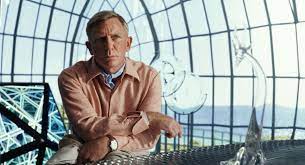 I’ve hardly seen any movies in the last few years — mainly because of Covid — but I’m not very good at keeping up with the latest movies  anyway. Generally by the time I’m aware something is showing, it’s gone off the circuit and I have to wait until it’s streamed, and hope I a) remember the title and b) am subscribed to that particular company.

But a few weeks ago, when I had a friend from interstate visiting me, we decided to go to see The Glass Onion, which had just appeared at my local cinema. We’d both seen and enjoyed the first one — Knives Out — and were curious to see the sequel. In any case, Daniel Craig!!! <g>
So we invited another friend and booked seats at a local cinema. I have several local cinemas — one a gorgeous renovated early 20th century one, and another which is more or less brand new and has lovely comfortable adjustable seats and plenty of leg room. We went to the latter.

What I hadn’t realized was that the showing of this film was a new system, where it only showed in cinemas for a week, and then came out on Netflix. (You can watch the Glass Onion trailer here.)

The Glass Onion was a lot of fun, and over a Chinese meal afterwards we debated which one was the best — Knives Out or The Glass Onion, and came to the conclusion that Knives Out might win by a nose, mainly because of the surprise element. I remember when I watched it I wasn’t sure, at the beginning, whether it was a tongue-in-cheek spoof on the Agatha Christie kind of mystery or not. With The Glass Onion, it was clear from the start, and there were also a lot of delightful current cultural references that made us chuckle.

I do recommend watching it, but I have to say, I think we got the best experience with the immersion of the  big screen, a fairly full cinema (though not crowded) and our fabulous comfortable seats. I think watching movies in company is almost invariably better, especially ones with a few laughs, as laughter is contagious. So I guess if I want to have the premier experience, I’m going to have to take more notice of the movies coming out!

This week I’m off to see Margrete: Queen of the North.