I have a school reunion coming up in a month or so, and though I’m not one of the people organizing it, I’m finding the process very interesting. We’re all well and truly adults now but it’s funny, so many of the reactions people have been having show me that though  we’re all mature-looking on the outside,  inside there’s a big chunk of the insecure teenagers we used to be.  (That’s not me in the photo, by the way — it’s my mum. I couldn’t find any photos of me — they’re somewhere in a box.)

People have come up with all sorts of reasons they don’t want to come. One friend was saying she wasn’t going to go the reunion because “everyone else’s life has turned out so much more impressive” than hers, which from where I’m standing isn’t at all true. She’s just hard on herself,  but an old friend had told her recently “You had so much potential” — so now she feels like a failure!

Other reasons for not going have ranged from “I won’t know who to sit with” or “I don’t want to run into my old girlfriends/boyfriends” and “Nobody will remember me (or liked me) anyway.”

I understand, because I was very reluctant when the first of these school reunions (just of our year) came up. I had no plans to go —  I’d kept contact with my main friends anyway— but two friends of mine badgered me into it. And to my surprise, I really enjoyed it. And it got me thinking about, and analyzing, my youth/adolescence in a different way.

High school was a transformative experience for most of us. Ours was an academic, government high school and students were selected academically, and came from all over Melbourne and from all walks of life. We went from thinking ourselves one of the smartest in our year to just being average — some of our schoolfellows were truly brilliant — and the culture of the school was stimulating and challenging—and transformative. So after that first reunion, I realized we all had more in common than we thought.

Since then, a small group of the women I went to school with meet a few times a year  for lunch and/or an outing — all because of going to a reunion. We weren’t all great friends at school but now we all get on wonderfully well  and are getting to know each other as we didn’t at school. And reflecting about our very different lives. (That photo isn’t of me in high school, but of me at school in Scotland when I was 8. I found it on my own website. <g>) 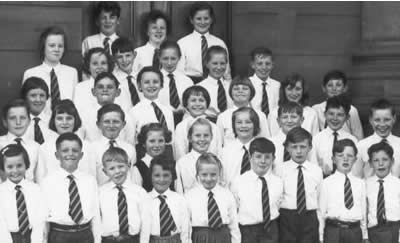 But finding people is hard. For a start, we came from all over a large city, and ours was a large year, so there are a lot of people to find. Since school we’ve scattered all over the country, and even the world in some cases. One guy is a music performer and teacher in London. I remember him wrestling his double bass on and off the tram (trolley car) to and from school. Luckily he was a tall guy. I guess he still is. <g> Another woman lives a good part of the year in France and pops all over Europe. And others I have no idea of.

We’ve tried FB and LinkedIn, and other on-line places, and though we have old address books from school years, only one person I know still lives where they used to.   I’ve managed to dig up a small group of the men in our year — but the people I’ve come unstuck on are the women. So many changed their names on marriage and there’s no hope of tracking them down. So it won’t be the full group, but still, past experience has shown that will be a valuable and worthwhile experience.

I’ll keep you posted on how it all goes, but in the meantime, what do you think about school reunions — love them or hate them?

I’ve never been to a class reunion since graduating in ’71. I had a few very close friends in HS and kept up with them. Our class was absolutely huge. I am so glad your friends talked you into going and that you had fun! My friends could talk me blue in the face and I wouldn’t go. Sorry. I don’t mean to be a kill-joy here. I met my hubby in Uni and we moved away after he graduated, we were away for 40 years before moving back ‘home.’ We’re close to family and my best friend and her… Read more »

Thanks Michelle. I do have pretty good memories of people and events from back then, but we’ve been sharing up to date photos, and oh dear — I wouldn’t recognize a lot of people. As one guy said :”We’ve all got older and fatter and balder” — to which I replied, “I’m not balder!” LOL
I can imagine you’d have fun with Anna — she’s a party girl! Glad you went.

Our 50th just passed two weeks ago and I didn’t go. Not that I didn’t want to, but the information led me to believe that there would be very few options for seating, it would be more a standing reunion. Since my back surgery several years ago, I can’t stand for long periods, so I opted not to go which really did make me sad, it’s the first one I’ve missed. Low and behold, when the pictures were posted, there was seating for everyone with tables, seating outside (it was a beautiful evening out) seating around the room. I wish… Read more »

Oh Theo, what a shame. I have a bad back from time to time and having access to seating is vital. Next time you’ll have to tell them in advance that you need a chair — as I’m sure a lot of your fellow schoolfriends do as well.

I went to one reunion the year after we graduated. As you know, it is harder to keep track of female friends who marry etc. My husband was in the army so we weren’t even in the USA for over a decade. When I attended college, it was a women’s college. It is now co-ed and I no longer feel any connection to it.
My high school class consisted of 57 students because the school system was changing. Most of my classmates were children of military personnel who scattered around the world.

Nancy that would make it hard — women are almost impossible to track down, and the some of the military kids would probably still be scattered around the world. Still sites like FaceBook have helped lots of people connect.

I hope you have a fantastic time, Anne. A good few years ago, I was helping organise my senior year’s 20th reunion (only to move to Scotland the week before it happened, but anyway…) and my boss – who had also gone to a girl’s school – gave me some good advice on reunions. She said that contacting school chums for the 10th was OK because many people’s parents were still living in the same place. The 20th was very hard because everyone had moved and married and changed their names. The 30th and 40th became incrementally easier as women… Read more »

That’s very true, Louise — the older we get the more connections are lost. I’ve searched for a lot of the women under their maiden names but quite a few I know have kept their married names, even though they’re divorced — mainly because they want the same surname as their kids.