I made mushrooms on toast for breakfast this morning. Perfect for a chilly winter morning. They weren’t very fancy — just sliced mushrooms (from the supermarket) cooked in a little bit of butter, with a little finely chopped onion,  a sliver of minced garlic, fresh thyme and some pepper. I often add bacon and maybe a dash of Worcestershire sauce, but it’s more or less the end of the fridge and I had no bacon. But it was yummy.

When I was a little kid (up to the age of around 7) my family and I used to go mushrooming a lot. I adored the hunt for the mushrooms, but I never wanted to eat the cooked ones — I used to think of it as a black mess. Wild mushrooms are much stronger than the commercial ones I buy now.

But these days I’ve been reluctant to go mushrooming because just about everyone I know says it’s dangerous, and some mushrooms will kill you. I know that, and I feel reasonably confident that I know the safe ones, but I was only small when I used to go hunting them with the family, and I get rattled by the warnings and so don’t go. It’s a shame, I think. Maybe I’ll sign up for a foraging course when the season for that comes around.

I do think some people overreact. I once scattered spent mushroom compost over my front garden to enrich the soil, and was thrilled when some time later, mushrooms started popping up. I knew they were safe, the compost having come from commercial mushroom farms, and I was looking forward to the morning when they were big enough to pick and cook  for breakfast. But some “helpful” person must have decided they were dangerous, because they came into my yard and kicked the mushrooms to bits! So annoying!

So for me, now it’s commercially grown mushrooms.  I’ve bought bags of seeded (spored?) mushroom compost to grow my own, and they were great fun, and very satisfying to grow, but that was in the days when there were four of us in the house, and we could deal with the multitude of mushrooms we ended up with. But now I think of it, after I do my shopping tomorrow, I might make mushroom soup. I used an Elizabeth David recipe that thickens the soup with bread. It’s delicious and very easy. From her book, French Provincial Cooking, my copy of which is very battered and well-loved. I often use chicken stock cubes rather than proper stock, and whizz it in a blender, which is much quicker. It’s still yummy. 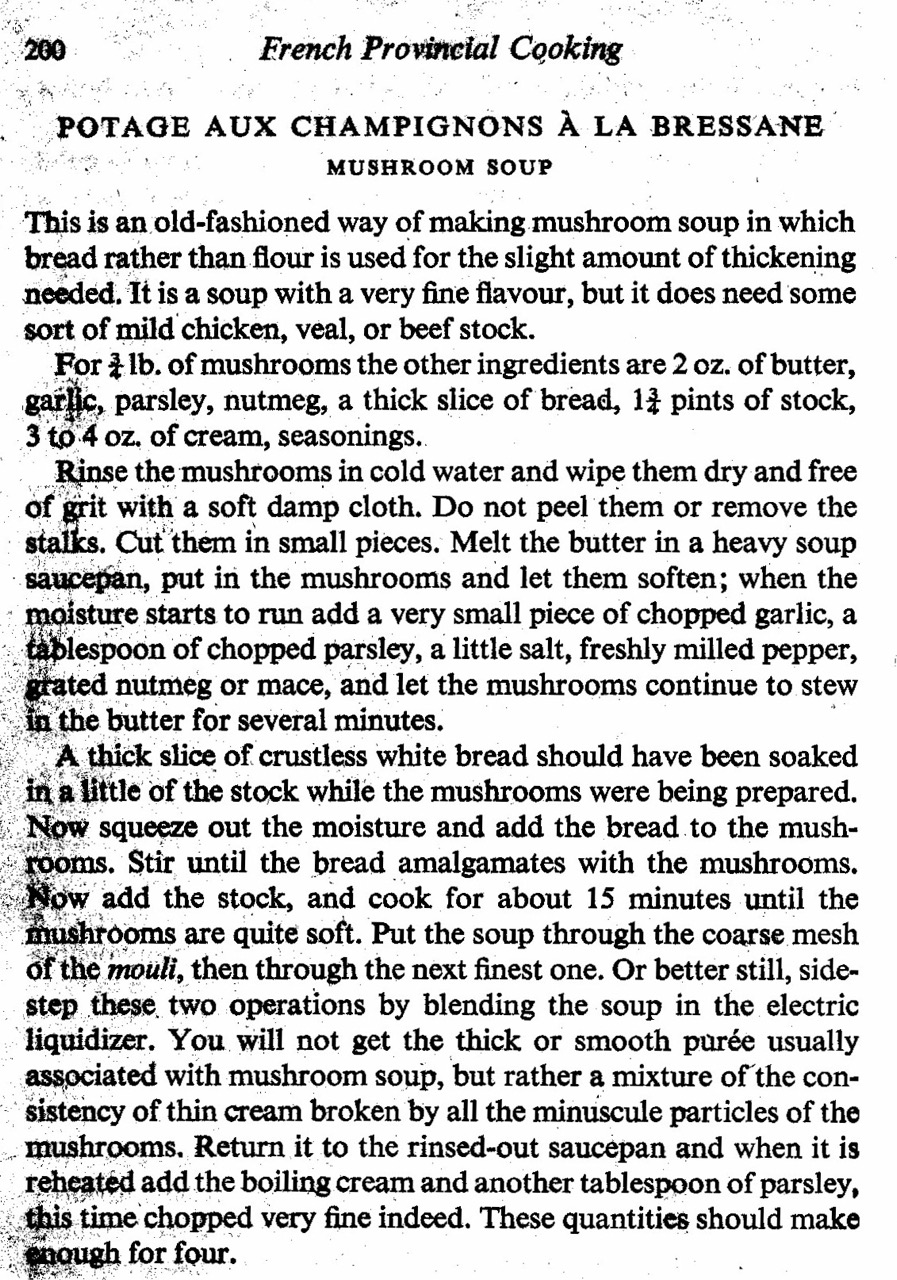 Oh, Anne! If someone set foot on my property like that…well, someone did once. I used to get a few Shaggy Manes at our previous house, not really enough to do anything with so I just left them. One year though, conditions must have been just right and there were hundreds in the front yard. I was so excited! I got up early and went out to pick them and there were three or four strangers milling about on my private property picking all of my Manes!! I yelled at them to drop the mushrooms and get off my property… Read more »

Theo, I’m horrified that people would come onto your property to steal your mushrooms. The interfering person who kicked my mushrooms to bits at least had good, if mistaken, intentions. But to ignore you when you asked them to leave!!! I’m appalled! I don’t know Shaggy Manes — we don’t have them here — but we do have morels, I know, though I don’t believe I’ve ever picked or eaten them. As you say, people like to keep their good mushrooming spots secret. When I worked in the Community Education Centre, every mushroom season, a couple of the Italian groups… Read more »

I was pretty horrified as well. I wouldn’t have called the police if they’d just left, but my front yard was a quarter acre at least and they were all over it and had no intention of leaving. So I had no choice. I’ve never heard of a Saffron Milk Cap since we don’t have them here, but I see a lot of delicious recipes for them! I came across four or five giant puffballs in the yard this past week and would have pulled them, but they were already past their prime so didn’t :( They really are delicious… Read more »