Marry In Scarlet is out! I hope you’re planning to read it. It’s available on all platforms — in paperback, e-book, and audio. Here’s a universal link to on-line stores. To order by post, try Booktopia in Australia, or the Book Depository in the UK which will send books anywhere in the world for free postage. You can also buy it from most bricks and mortar bookstores, though some will need you to order it in. 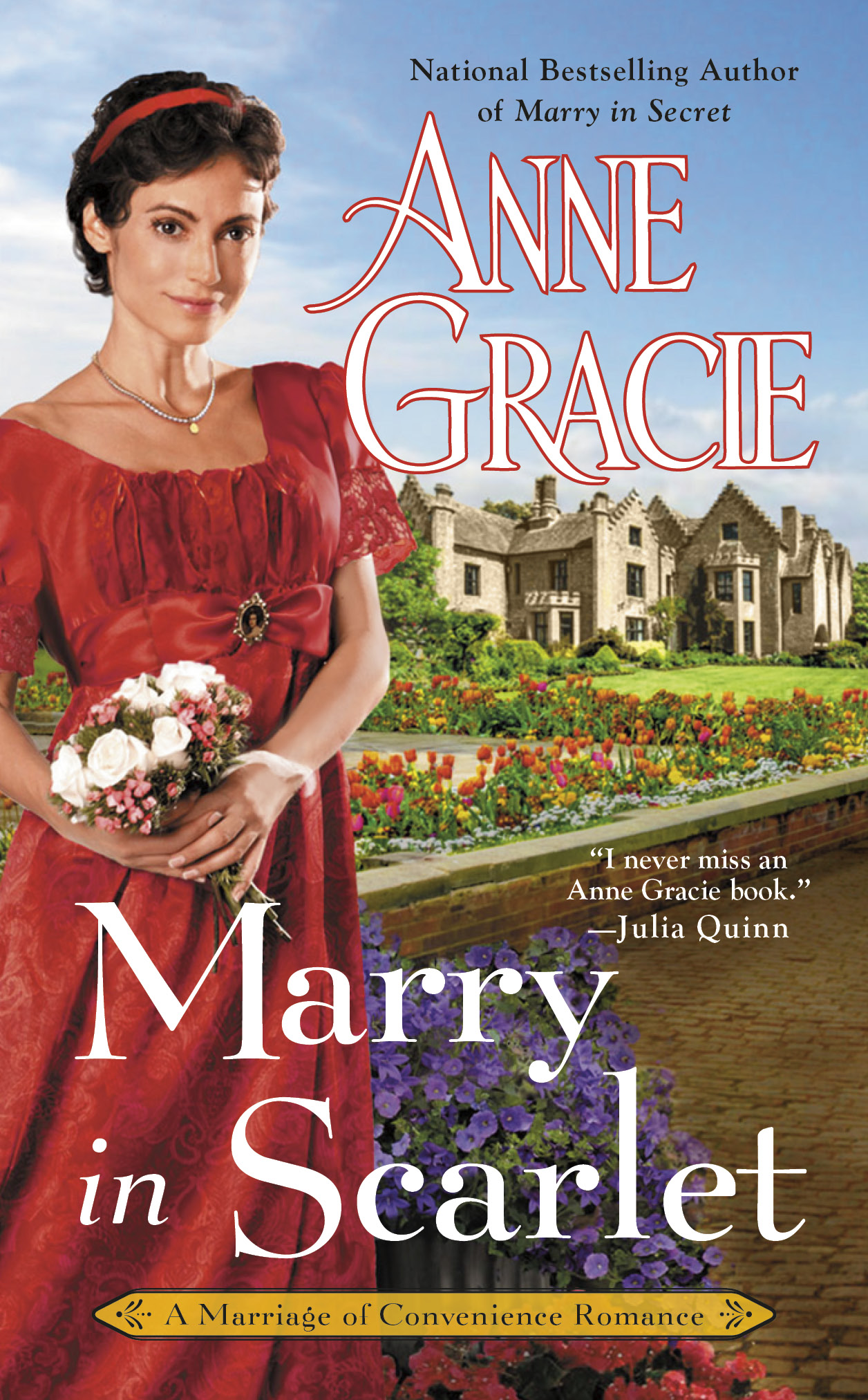 It’s getting some lovely reviews, and I’m sharing this one that appeared in the Australian Romance Readers Association newsletter.

I truly hope millions of readers are hanging out for this final book in the Marriage of Convenience series, because Anne Gracie has certainly saved the best for last. If you haven’t made their acquaintance, the books are: Book One: Marry in Haste, Book Two: Marry in Scandal, Book Three: Marry in Secret. If you haven’t already, start reading now and thank me later.
The left-at-the-altar Duke of Everingham from Book Three is our hero. What? you say? How can such an ice-cold, supercilious, arrogant, uptight and privileged man become a hero? And to whom? Who would have him? He was one scary dude, even more chillingly scary when his marriage service was interrupted, and the bride jilted him.
Hah. Read on.
Even more astonishingly, our heroine is the intrepid and absolutely wonderfully wild Lady George Rutherford. She’s become lovable and more vibrant as the series continues. This is the most unlikely pairing, ever. Well done Anne Gracie, you had me hooked from the beginning. Watching these two twirl and flash around each other was 101% fun!
George is a fighter. She’s had to be, to survive. Her father deserted her, and her mother unhappily died. George was left to survive with a faithful servant, but no money or knowledge she came from a wealthy, titled family. When Cal Rutherford (his story is Book One) discovered her and brought her home, she had a hard time adjusting to Society, and indeed the idea of ‘family’. She’s always been alone and impoverished. Fortunately, the beautiful Rutherfords are fabulously warm, loving and wise. They embraced George with joy and affection, even as she does distinctly un-societal things, like don riding breeches and scorn the side-saddle. Her fresh, fabulous personality shines through.
His Grace, on the other hand, has always lived a privileged life. Born and bred for it. It’s very telling that his best friend, Sinc (who steals most of the scenes he’s in with his irrepressible humour), was one Redmond Jasper Hartley (His Grace) made on the first day of boarding school. They were both little boys of seven, dumped at school and told to cope. No wonder they bonded.
Poor little rich boy Hart’s family is, quite frankly, appalling. We are treated to several scenes with his mother that would curdle custard. My goodness, what a cold, uncaring schemer she is. Sounds like his father was equally horrid. The idea of marrying for anything other than convenience is completely alien for Hart. The less he has to fuss with a woman, the better. When ‘the Heir’ arrives, Hart can install his wife—somewhere else—and get on with his life.
With the help of George’s Aunt Agatha, he decides George will do. She’s feisty and independent, not a simpering socialite, she likes dogs and horses (although she will not sell him her stallion!), and she prefers country life. Perfect. Once the Heir is begat, Hart can dump George on a country estate and they’ll both be happy and never have to see each other ever again.
Too funny.
Their romance is not just a clash of wills and spirits, although that certainly happens as George (surprise, surprise) initially refuses the Duke. It is also a story of courage as both step into the unknown, act honestly with each other (who knew?) and learn to be better people. Can their battered souls mend? Can they find their way into each other’s arms? You can probably guess the ending, but getting there makes for insightful, tender reading.
This is a spectacular romance, with bonus glimpses of favourite characters from the series popping in and out.
Anne Gracie also touches on other issues, such as the (non-existent) rights of married women in Regency times, and how Society can crush and reject people unfairly. It makes for better reading, quite frankly; the stakes were higher for this intrepid couple. For the Jane Austen fans, Anne treats us to JA quotes at the beginning of each chapter, each one perfect for the ongoing story.
A 5-star read that I laughed and cried through and finished with a happy smile. Reading it, I felt cherished and uplifted.
Reviewed by Malvina Yock, ARRA (Australian Romance Readers Association)