I had a group of  school-friends’ over for lunch yesterday — the first group event I’ve had in the new house. We reconnected at a school reunion some years ago and ever since, nine of us have been meeting for lunch and a catch-up a few times a year.  It’s generally at someone’s place, but sometimes we have a picnic or go on an outing — for instance earlier this year we met at a sculpture park, and ate lunch from the cafe. 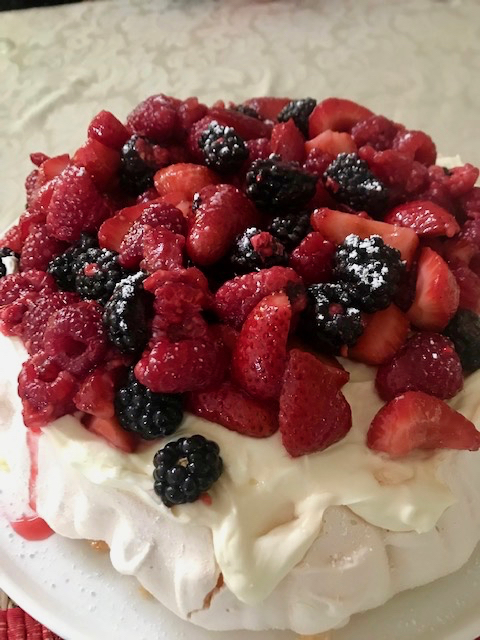 It’s usually a “bring a plate” event (a bit like the American “pot luck” I suspect), which makes it easier. (Speaking of “bringing a plate,” years ago, an American friend of mine, when she was first invited to an Aussie party and asked to “bring a plate” did just that. Assuming the hostess didn’t have enough plates for everyone to eat off, she bought two empty plates, one for her and one for her husband. We think we speak the same language but it’s not quite true, is it?)

So because this gathering was at my new house, and it was close to Christmas,  I decided to celebrate by making a pavlova (or pav), which is a favourite Australian dessert. It has a meringue base and is topped with lashings of whipped cream  and fresh fruit. The shop-bought pav’s are generally crisp meringue all through but the best home-made ones have a crisp meringue shell that is marshmallowy inside. (The secret is adding a little vinegar to the whipped egg-whites.)

I was a bit apprehensive about using my new fancy electric oven (which is quite technological compared with my old gas oven) especially as the recipes on-line varied in cooking temperature for fan-forced from 80C to 130C but they all agreed on 90 minutes cooking time! So I went for 105C and crossed my fingers. I baked it the night before, turned the oven off after 90 minutes and didn’t open the oven until the following morning, (which is supposed to prevent it cracking) and to my relief, it came out perfect and uncracked.  That’s it below. 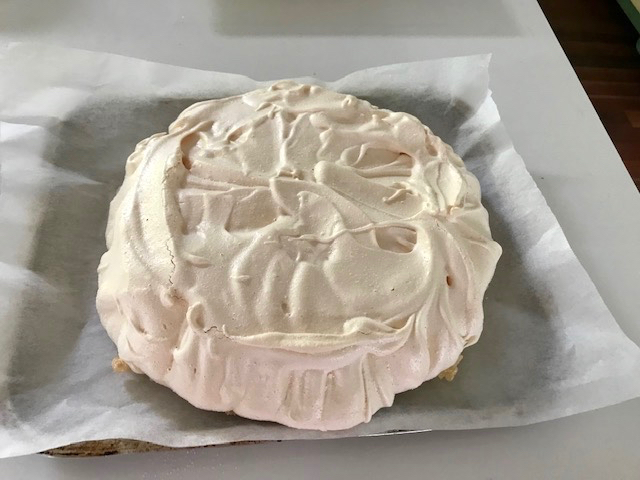 But the moment I put the whipped cream on it, it cracked — so then I fretted that it might not be properly cooked inside. So I slathered over the cracks with whipped cream, and piled on the fruit — in this case mixed berries — and hoped for the best. And when we cut it, it was perfect — a crispy meringue shell, marshmallowy inside, and not too sweet. Everyone loved it and some came back for seconds and there’s none left. I was so pleased.

Have you ever baked a pav? Or eaten one? I know a lot of North Americans never have, and I don’t know about  people in the UK or Ireland, but they’re very common here and in NZ. It’s very much a summer dessert. So what do you like to bring when you’re invited to “bring a plate” or a potluck? 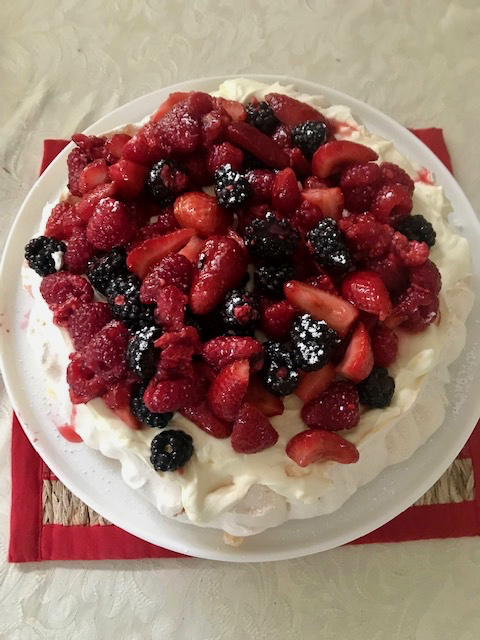 I have never heard of nor eaten a pavlova. But, it is absolutely beautiful. Looks and sounds delicious.

Pavlovas really are delicious, Annette. Hope you get to try one one day.

Your pavings looks lovely, Anne. I’m glad you all enjoyed it. I bake pavlova every year for Christmas, but as I have fussy family members mine is different to yours. I take it to the table naked. I have bowls of fruit (usually berries because they’re so lovely in summer) and whipped cream, a dish of shaved chocolate, a bottle of Tia Maria and sometimes one of chocolate liqueur. We all assemble our slices of pan according to our individual tastes and everybody is happy.

Thanks, Shelagh — that sounds like a good idea. I have a friend who is dairy-allergic, so I could make cashew cream for her and real cream for the others . . .

Your pavlova looks luscious, Anne! I would have enjoyed having the meringue all by itself – I do love a good meringue! Several years ago we swapped houses with friends of friends who lived near York, England. It was July and their garden was a treasure trove – especially the raspberries! There were four of us to eat them but we couldn’t keep up — I made 5 pavlovas in 3 weeks. Luckily, we were doing a LOT of walking every day. Until that trip, I’d never known that leftover pavlova makes a great breakfast! For potlucks, I almost always… Read more »

Constance, having so many raspberries — what a treat. I can imagine they would be wonderful inspiration to bake so many pavlovas.
I sometimes take stuffed eggs, too, to take to a “bring a plate” lunch. Not devilled though, because I make the yolk creamy and top it with caviare. Yum yum.

Looks delicious, and KUDOS to you for turning out a perfect product in the new oven. They can be intimidating!
Have a wonderful Christmas.

Thanks, Lorraine — I was ridiculously intimidated by the oven, and so relieved the pav turned out okay.
Happy Christmas to you and your family,

Congratulations.️That has to be the perfect pav…and the delicious fruit topping is berry well done! Love a good pav. I bury the bananas underneath the whipped cream. Put extra vanilla into the whipped cream and leave the sugar out of the cream as the pav is wonderfully sugary on it’s own.️

Heh heh on the berry well done, Lynne. I don’t think I’ve ever made pav with bananas, but I often make a trifle and for that I bury bananas under the custard. I didn’t put sugar in the cream either, though the recipe I used said to add a little icing sugar — it’s sweet enough I think.

I love your blog, don’t usually subscribe to them, but your books are so good, I thought I’d try. I can’t wait to make a pav. It looks and sounds delicious. Something like a Viennese tort.

Thank you Gene. I hope you do get to make a pav — it’s an adventure and if it all works well, it’s such a buzz. I’m not sure about it being like a Viennese torte, though. I’ve always thought they were made of cake, whereas a pav is very light meringue. But both of them would be scrummy, I’m sure.

My mother-in-law bakes enormous rectangular ones when asked to “bring a plate.” (Biggest baking sheet she can get in her oven.) She insists on putting kiwi (which I can’t eat) and toasted slivered almonds (which my husband can’t eat) on them. In spite of us, there is never any left. My cousin’s daughter gave away 2 miniature pavlovas instead of fruit cake to departing guests at her wedding. In each wee box were dabs of meringue, cream and 1 blackberry per nestled atop. There was also a team doing the last minute assembly in the kitchen! Yours looks lovely and… Read more »

Marianne, sounds like your MIL is catering for crowds, rather than individuals. I love the sound of the wee giveaway boxes of pav, too, though it sounds like a lot of work.

I’ve never heard of berry sugar. Some recipes suggest if you can’t get the fine sugar, to whizz ordinary white sugar in a blender or kitchen whizz, which breaks it down a bit.

Your Pavlova looked lusciously gorgeous! I didn’t need the caption to tell me what it was. Oh, my! You did a splendid job. I’ve always been impressed by your writing But your Pavlova is above and beyond!

Happy Christmas down under. Be well and safe.

Thank you Binnie Syril. I hope the books last longer than the pav did. <g>
I hope your festive season is equally happy and safe. By the way, yesterday I passed on your charoses recipe to a friend of mine who has a bumper apple crop at the moment.

I decided to try making a pavlova for the first time this past Friday for a Christmas lunch with the friends group on Saturday. A friend said to bake it on greased tinned foil which I totally forgot to spray n cook. It baked perfectly with crisp outer & marshmallowy centre, but it was stuck. it did not like being mishandled when being removed from the foil. As it was made with 12 egg whites – it was big, so it broke into lots of pieces. I eventually pieced it together in another baking pan, smothered with a liter of… Read more »

Oh dear, Michelle, what a rotten thing to happen. So disappointing after all your hard work — and you couldn’t even turn it into Eton Mess, because of the humidity. I know meringue doesn’t respond well to humidity. My sister in Queensland won’t make it during their humid season. Maybe you could try it again in the dry season. Hugs. I can imagine how disappointed and frustrated you must have been.

Showed my husband and now he is salivating. It is his very favourite thing to eat, never mind the time of day.

Vonnie I think he has that in common with a LOT of people. <g> I know people who eat leftover pav — is there really such a thing? — for breakfast.

Pavlova is very popular in the UK in summer. I have been known to make little individual ones rather than a big one – but it is very faffy. Also sometimes mix Lemon Curd into the whipped cream and have it with blueberries.

Yours looks lovely and as it is icy cold and snowing here today that picture of summer was nice and warming.

Thanks Christine — mixing lemon curd with cream and serving it with berries sounds lovely. And you could make the lemon curd with all those yolks left after making the meringue. I have made a trifle with lemon curd, lemon jelly, custard, whipped cream and fresh mango and berries, and it’s a lovely combination.