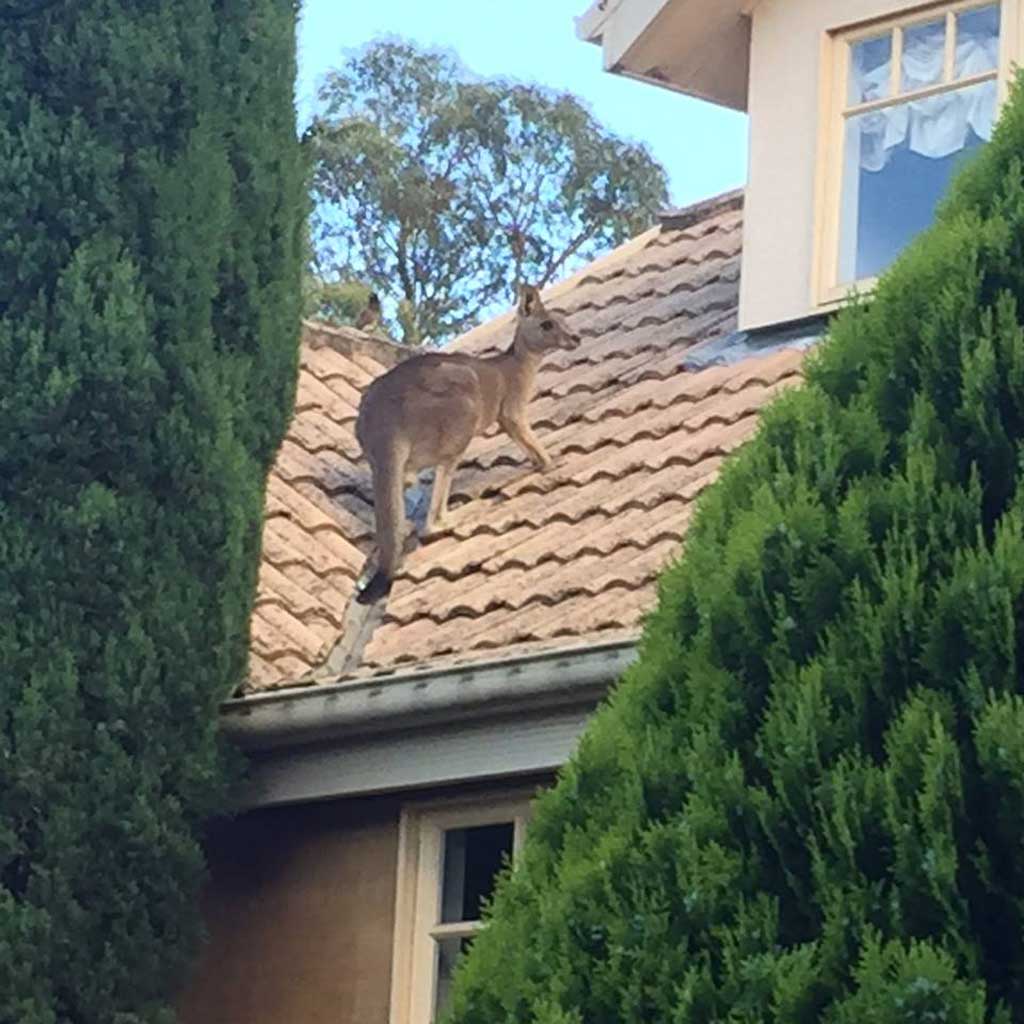 There is a post that keeps on appearing on FaceBook and other places, and it always makes me grumpy. It’s here.
https://myhealthgazette.com/things-you-can-find-only-in-australia-is/

And the reason it makes me grumpy is that it presents extraordinary things as everyday things that all Australians barely even notice, they’re so used to them. But that’s completely untrue, and much of this article is misinformation. It repeatedly suggests that we all constantly battle with sharks, crocodiles, snakes and deadly spiders, and more and that deadly spiders and snakes in our toilets is common. Perhaps it was last century — not common, but certainly something to be cautious about — when outdoor toilets were more widespread, but not these days — except in isolated areas where outdoor toilets are still used.

KANGAROO ON ROOF
Take this photo of a “kangaroo” on a roof. It’s a real photo, but it was taken because it was such a very surprising thing — it made the news all over the country and even overseas, but it was presented in the article above as a fairly normal event.  The thing is most Australians live in cities, and an awful lot of city people have never seen a kangaroo in the wild, let alone hopping around on the roof. Kangaroos live in the wild, sometimes on the edge of cities, and they come out at dawn and dusk to graze. You might see them in the day time — I once saw a mob of kangaroos grazing in a paddock very close to Melbourne airport. I was in a taxi, heading home from some trip. It was a rare event and I was quite excited and wished I could stop and put up a sign, saying, “Hey Tourists, Look — kangaroos!” But I was in a taxi on the freeway, so of course I didn’t.

GIANT LIZARDS
Another one of the photos on that site shows a giant lizard (a monitor lizard), crawling up the inside wall of someone’s home. Again, this would be an extraordinary event and probably made the news because of it. In any case that kind of lizard is only found in certain parts of Australia — the outback and northern Australia, and not where the majority of Australians live.

Smaller lizards are common — people are generally happy to find a blue-tongue lizard in their garden as it’s harmless to people and  will eat a lot of garden pests. The only lizards I get are tiny little skinks, smaller than my little finger and never in the house. Queensland people and those who live in more tropical areas might get geckoes in the house, but again, they’re harmless to humans and eat annoying insects. 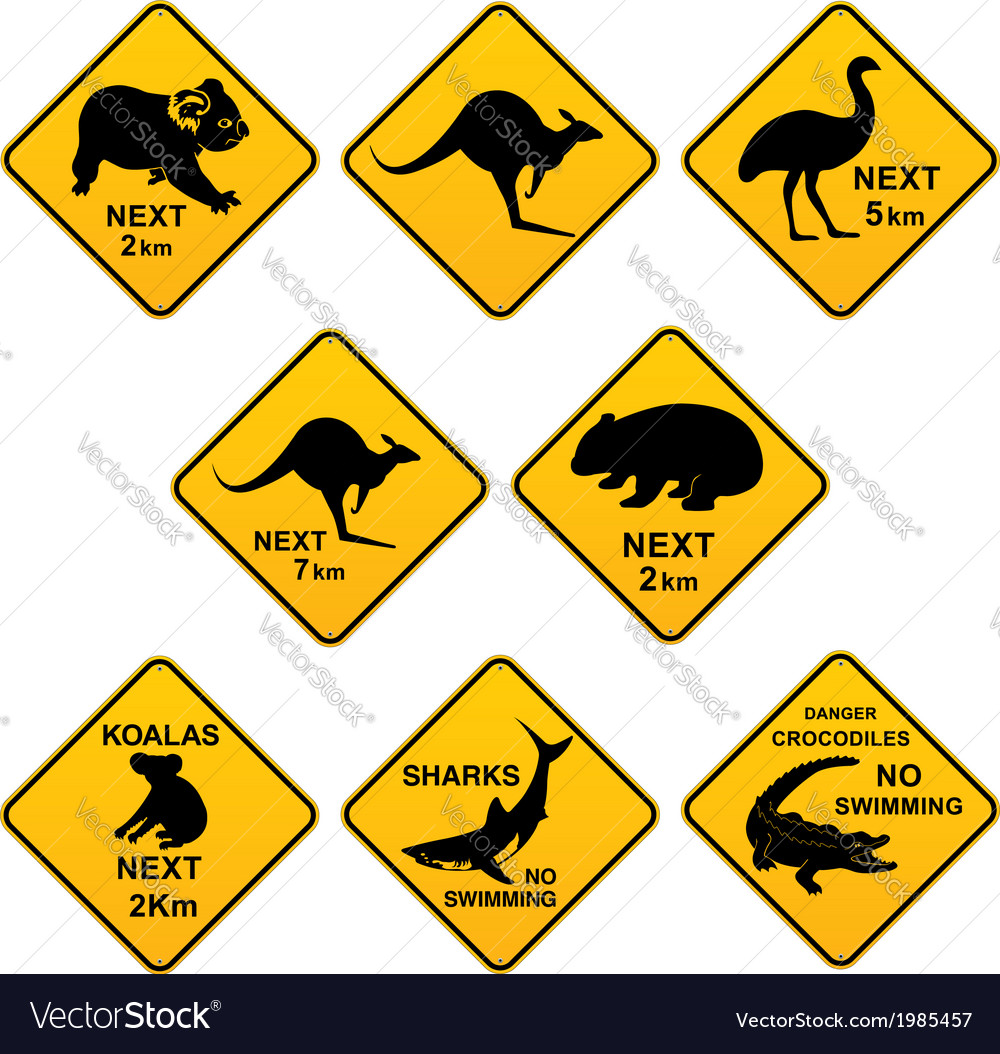 ANIMAL ROADSIGNS
Roadsigns — yes we often have roadsigns with an image of one of our native animals on them. They warn us to beware and to drive carefully in case we hurt them — not, as is implied in the article in case they hurt us.  But in the article they show a collection of signs with 8 different creatures on them, and imply that getting out of the car in the next 4000 kms would be fatal, because of these creatures.  For a start, you’d never get all those creatures in the one spot, and really only the spider, snake and shark might be dangerous. I suspect that sign was made as a joke. Here are some real signs, and as you can see, most of them are to protect the animal, and only the shark and crocodile ones are to protect humans.

TALL STORIES
Australians do tend to make up tall stories or exaggerations for gullible tourists. If anyone ever tells you about “drop bears” — dangerous koalas that supposedly drop down from the trees and can kill you — it’s nonsense. It’s a joke.

THROW ANOTER SHRIMP ON THE BARBIE is another one of those. In the old advert, Paul Hogan, who’s a comedian, was holding a large prawn. Calling it a shrimp was  a tongue-in-cheek joke, implying that we have such big prawns that the ones he was showing in the advert were merely “shrimps,” which are tiny. You’d never toss a shrimp on a barbie — it’s too small. Trouble is, nobody outside Australia got the joke, and since the ad was made mainly for an American audience, people simply took it at face value and people still think we say it.  I’ve never heard anyone say it.

VEGEMITE
It’s true Vegemite is a favorite Australian spread — it’s salty, not sweet, and is an acquired taste. Most of us who love vegemite have been eating it since early childhood — and how much better to get kids hooked on a salty spread high in vitamin B than a sugary jam? There’s a very old advert for it here — and a song, “We’re happy little Vegemites as bright and bright can be . . . 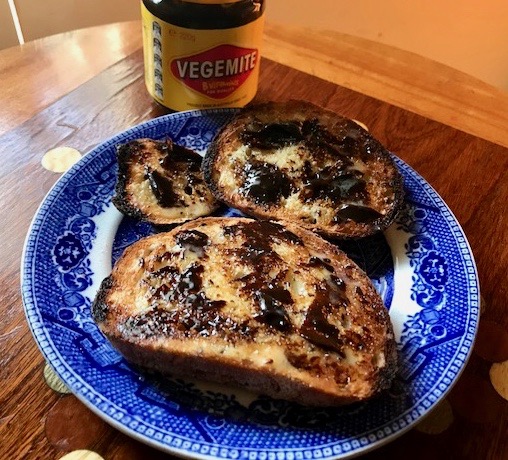 To this day I will make toast and vegemite when I’m recovering from illness, or feeling a bit down, or even just because I’m in the mood. And kids will often have vegemite and cheese sandwiches in their lunchbox — vegemite and lettuce was my favorite. But we don’t slather it on toast like some people do peanut butter or jam — it’s just a light scrape across well-buttered toast. Yum. But my friends who were raised by parents from other cultures often don’t like it — just as some Australians don’t like olives, and won’t eat calamari. It’s a cultural thing.

BAREFOOT SHOPPING IS NOT “PERFECTLY NORMAL”
Except perhaps in beachside places, where the beach is across the road from the shops. It’s not against the law, but most people wouldn’t even think of going shopping barefoot.

STEVE IRWIN?
Perhaps for some Australians Steve Irwin was “a role model” but to be honest, I first heard about him from American friends, and when I finally saw him in action on the TV, I thought he was a reckless show-off, taking foolish risks in the way he handled wild animals. If anything I thought he was a bad role model, especially for kids,  and the way he died? Well, for a lot of people it was an accident waiting to happen.

MAGPIES SWOOPING?
Yes, I’ve been swooped many a time by magpies and plovers, especially when I was a kid walking to school, and though some cyclists might have constructed helmets with spikes and other things to deter magpies from swooping at them, it’s not nearly as widespread as is implied. I’ve never seen one, even though I live in an area where heaps of people ride bikes to work or wherever. Implying that we all wear them is just silly. 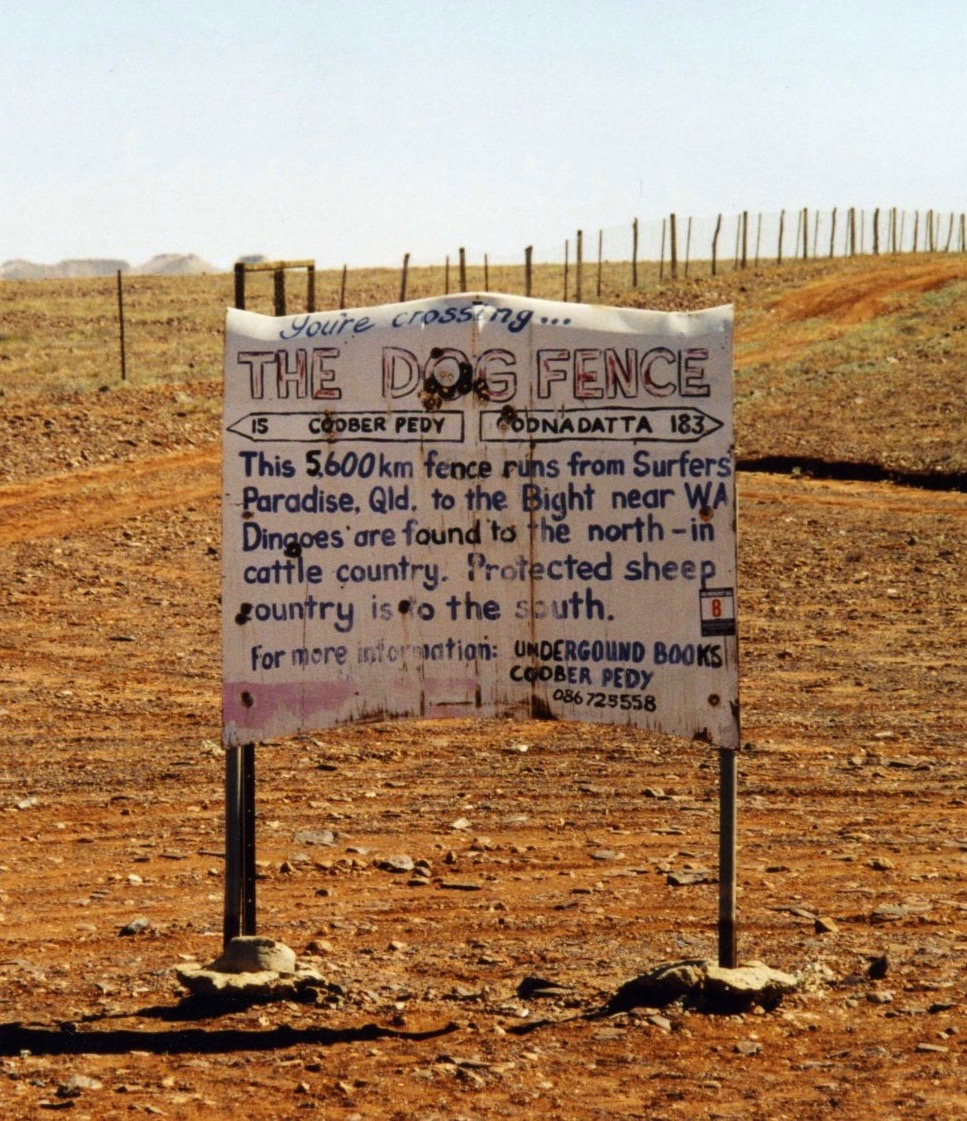 The article says “beware of dingoes” and likens them to wolves. But they’re very shy animals, and most people in Australia will never have seen one in the wild. Some might hang about outback camping sites or on the fringes of outback towns, scavenging for food, and these are dogs to be wary of. And some domestic  dogs have interbred with dingoes. The dingo-proof fence the article shows is not to protect people, but to protect sheep. A dingo can kill a dozen sheep in a night.  You can read more about the dingo fence here.

Yes it’s true. McDonalds is known generally as Maccas, Tasmania as Tassie (pronounced Tazzie — but we don’t call people from there “tassies”). Many Australians grew up with a school-ground nick-name. But phrases like “have a Captain Cook” (have a look) and “what’s the John Dory?” (what’s the story) which the article mentions, are borrowed and adapted from Cockney rhyming slang. In any case, some phrases quoted are probably regional ones — I, for instance have never heard anyone say “heaps good” — heaps, yes, for a lot of something, but never “heaps good.” That might come from Queensland, or Sydney or somewhere.

LEAVING OUR DOORS UNLOCKED?
Some of us do and some don’t, depending where we live and how we were brought up. A friend who was brought up with a policeman father lives in a nice, well-off suburb, but has every door and window double locked at all times — even when she’s in the house. Me, I was raised in the country and I don’t like the feeling of having everything locked up. In fact the other night after a stinking hot day I opened my front door to let the cooler night air in, leaving  just the screen door (which has no locks) closed to keep out mozzies (mosquitoes). I forgot and left it open all night. No big deal. I often leave it open all day as well.

So, my rant is more or less over, even though I haven’t dealt with everything in that article. Just don’t believe that what might be true for one event, or in one part of Australia, is true for the rest. We’re a big country — the same size as continental USA, and that leaves room for a lot of variation.

Oh Anne, I get it. I live in a mixed area, very rural (me) a lot of lakes (not me unfortunately because the price of the houses is astronomical) tiny towns and small subdivisions. I’m on three acres with no fencing. Coyote cross our property and I can’t tell you how many people who have never seen one and move here will tell me, Beware! They want to attack, kill and eat your doberman! No, they don’t. They’re more scared of the doberman than anything but the myth persists. They eat rabbits and yes, the occasional tiny dog if left… Read more »

Thanks for this. I am always explaining to people outside Australia about the very things you mentioned. I live in Adelaide.

I spent a lovely 6 weeks in the Sydney area at 14 many, many years ago. There were times we were ordered from the water due to sharks. (Bluebottles were more likely.) We visited relatives to find our hostess and toddler holed up in the baby’s room because there was an owl in the house who couldn’t get out. And, yes, they’d had a monitor parked on the front porch. I discovered a tarantula a few inches from my head mopping up the floor. Different countries, different wildlife. My cousin in California had a black bear empty her refrigerator. However,… Read more »

Hello Anne, My what a list of non-truths of exaggerations of your country. I understand your frustrations as yes these are stories we here and sadly many are believed to be true. The one I like is vegemite. I grew up on Marmite which is similar, and I like them both. It is not easy to find either here in the USA so I eat it sparingly and yes just a touch here and there on a bagel or on toast hits the spot. As they say people do believe what is on the internet and do not check out… Read more »

Thanks for the information !!!

I fell in love with Australia through the Arthur Upfield Bony mysteries. Because my family is black like Bony I was intrigued with Updike’s insights..and his flaws. I had no idea how geographically diverse Australia was until those books..we Americans see about four different images..if that. Your books are brilliant..wish you would try some mysteries. Thank you for your rant..fun learning the reality.

I thought of the stories of falling iguanas in Florida when I read this last week and one just popped up. Iguanas are invasive in the semitropical Florida (US) climate, but the occasional cold snap stuns them. So, no risk of falling koalas in Australia, but there is a risk of falling lizards here.
From out National Weather Service!
https://twitter.com/NWSMiami/status/1219691736412246016/photo/1