The only neighbours I’ve met in my new house so far were two young guys who lived next door. They’re both very nice (and I was thinking potentially useful, since they looked handy and had trucks and tools and things.) But sadly, they were also moving. I met the first one when he asked me if I had any spare boxes, which of course I did. It turned out he was moving down the coast, so there went my short-lived fantasy of having useful men next door. <g>

Anyway the other one was moving up to northern NSW, and he was putting lots of furniture on the nature strip (verge) for anyone to take, because where he was going was too far/expensive to transport all his furniture. So he was giving it away. So first, with the help of a visiting friend, I first nabbed a low (4ft) narrow bookshelf for my hallway. 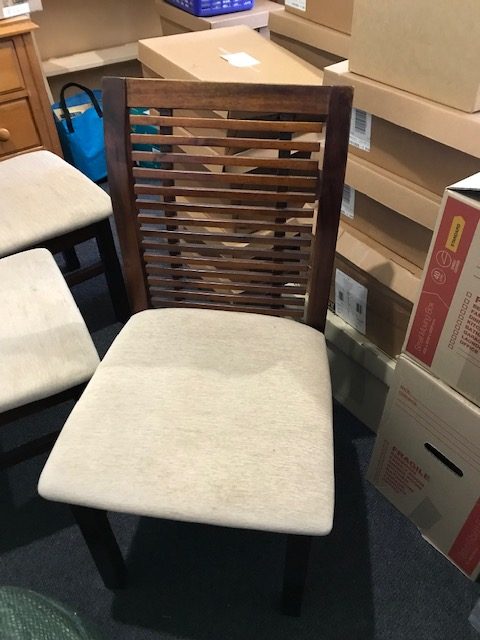 Then the following night I was returning home in the dark with takeaway Chinese food, and I saw some nice looking chairs there. I liked them — they had padded seats in oatmeal fabric, and my current wooden dining chairs are hard on bottoms — as my card playing friends often remark. There were three, so I brought them inside, feeling quite like the scavenger of the neighborhood! <g>

Next morning it was pouring with rain, and I saw there was a very nice table there, getting drenched. He had offered me “a kitchen table” the day before, when I’d asked him about the bookshelf, and I’d imagined some battered old thing, so I’d said no thanks. But this lovely table was, apparently, it. So feeling cheeky I knocked on his door and asked him about it, and he said, yeah, take it.

And then, even more cheekily, I asked for his help in carrying it onto my front porch — it was too wet to bring inside. So he did. (That’s it below, in the rain.)

He said, “There were some chairs too but they’ve gone.”

So then he told me he had the 4th chair inside and he’d give it to me before he left. 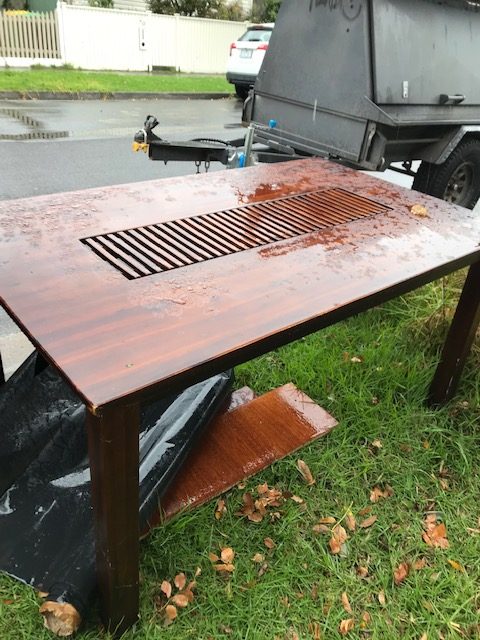 Several times I offered to pay — they’re really nice table and chairs — but he waved it off and poo-poohed the idea.

And then he brought in the 4th chair, because he was going out that night and didn’t need it, and was staying with a mate  until he left in a few days time.

So, now I have a lovely table and 4 chairs.

He had some other good furniture, and so I contacted the asylum-seekers aid organization, who help refugees get settled with houses and furniture, etc. I sent them some photos, pointing out that they were in the rain, and they came and got them straight away. So his furniture has helped a lot of people — including me.

My table is now on my deck. Isn’t it lovely? I was a bit worried it would be too big, but I think it works well. It’s close to the window at the moment because it’s bucketing down and I don’t want it to get wet again. I’m keeping my old dining room table inside because it’s round, and is the perfect size for my card-playing friends who don’t have to stretch too far for the pack. 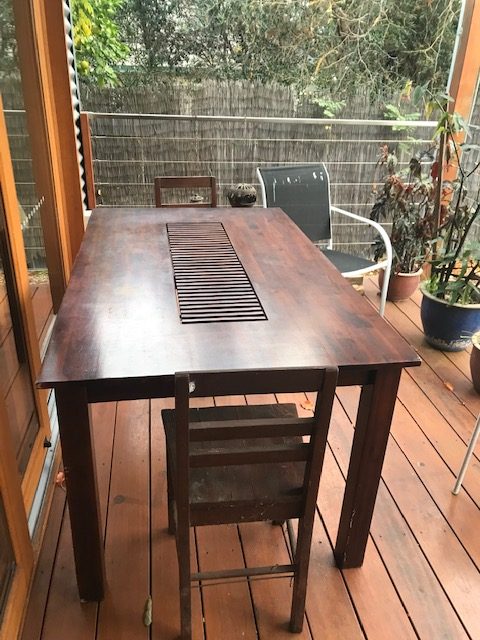 So there are my finds — all from the verge.

These days I’ve noticed that more and more people are leaving stuff out on the verge for anyone to take. I left a few things out myself, when I was leaving the old house, though most of my stuff went to charity shops.

I’m not sure whether it’s a sign that we all have too much stuff, or whether we’re just encouraged to buy new stuff all the time. My theory is that shopping has become so much of a leisure activity that we all have too much, and yet adverts and “lifestyle” magazines and programs continually entice us to want more and newer — if not necessarily better.

I get several interior/renovation e-zines and I’m often shocked at their “before and afters” when they talk about “outdated” kitchens and houses — when really they’re still very nice and perfectly good — just not the latest thing!

I get mildly offended on behalf of the former owners when they talk about “This outdated and shabby old house/kitchen/bathroom” blah blah. When it was last decorated and renovated maybe 10 years ago. Are we getting too wasteful, perhaps? I don’t know.

Have you ever found something good on the verge?

First off, what a lovely deck area! I’m liking this new house and I don’t even live there ;) And that table is very unique so good find. How nice that you got it free along with the chairs. I’m a ‘picker’. Sometimes, it drives my husband crazy, but overall, I’ve found some beautiful things that I think people either didn’t realize what they had or didn’t want to deal with like the solid brass floor lamp I found at the curb that must be from the 20’s (very art deco) and took some elbow grease to polish up but… Read more »

Theo, it’s wonderful when you find something that others don’t have the imagination to appreciate. When I was a student, I found a grungy old wooden picture frame that was covered in grease and dirt, and I got it for five dollars. Once I cleaned it up, it was beautiful. I still have it and I still love it.

We live on the Gold Coast and it’s the name of the game here to put stuff out on the grass verges. One of the reasons is it is so hard to get people to collect it unless it’s in pristine condition (and then why would you throw it out)? Two main charities who shall be nameless demand perfection. Otherwise you pay $50 per load for a handyman to take it to the rubbish tip. And of course the Gold Coast has quite an itinerant population so…

Vonnie, I expect that on the Gold Coast where people often have second homes, or holiday flats, it’s just too expensive to transport furniture, and in any case, who wants two lots of everything? But it’s so wasteful, I agree.

I’m with Theo – your new house looks great! And that table is gorgeous, Anne! I’m not much of a picker, but I do love our local “swap shed” – it’s actually a tent at the local dump where people leave off stuff they don’t want/need but think someone else might enjoy. I found a Royal Copenhagen teapot in their classic Danish Blue pattern, with nary a crack nor chip, and it’s now a prized possession. I wonder if I would love it quite as much if I’d purchased it?

Constance, there is that extra added excitement in finding a bargain, I agree. I believe there is still a lot of “hunter/gatherer” lurking in our DNA. I have some of my mum’s good china, but I never use it, so am trying to nerve myself to give it away to a good cause.

You said it yourself, it was too expensive to move. I have our son’s stuff in the basement. His current employment has 9 months to run. And, yes, I’ve some lovely stuff for picking it up, and disposed of some that would have been costly to dump, and that the local shops don’t take. (Garden shed, for example.)

It’s sad, isn’t it, Marianne, that it costs to have something taken away, when it’s still perfectly useful. At the charity where I’ve taken most of my stuff, they keep trying to offer me discount tickets as a small thank you, but I always wave them off, saying, “No, no! Don’t tempt me. I’m still trying to get rid of stuff.” <g>

Congrats on the lovely table and chairs and scoring the 4-shelf book case. I haven’t actually captured anything from the verge, but I used to forage at yard sales and flea markets and church sales. One never knows what one might find. Three book cases came from a cat-themed store going out of business. Several other book cases found their way home, as well. I simply love the joy of the hunt. Wishing you much happiness in your new digs.

Binnie, yes the joy of the hunt is it. All my bookcases are second-hand, but I’m planning now to get some built in the room that will become my study. But I love going to flea-markets and sales and second-hand places, too. But I need to get rid of more of my stuff first. And this new house is the incentive I need.