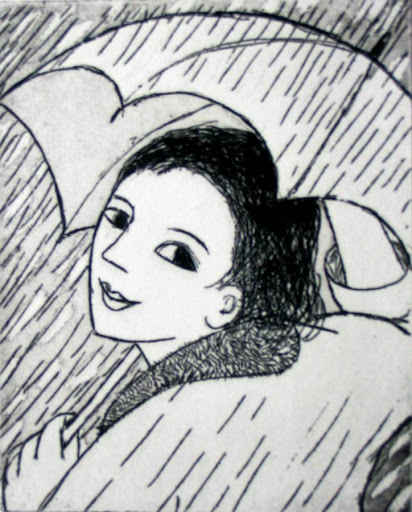 Funny you should post about rain. We’re under a severe thunderstorm warning here from now (roughly 3pm eastern time) until 11 tonight. We’re out of here tomorrow, to the tip of the thumb. Michigan is a mitten after all! ;), to sit on the water and do nothing but drink wine and listen to the waves for several days. I’m really hoping the rain has passed by then. I’ll email you some pictures. Lake Huron is one of Michigan’s “oceans” and absolutely gorgeous, no matter the season.

I just moved from Connecticut to Georgia in the USA and my new classmates acted as though I had come from a foreign country. Well, a general from the north had swept through Georgia burning a path to the sea in the previous century.

And I am from the Pacific Northwest where if you don’t go out in the rain, (drizzle, elsewhere) you spend a lot of time inside. However, I learned the rain in Sydney, Australia could make you very wet in a very short time and often arrived with spectacular thunder and lightning.

Here in Austin TX, rain is not always a common event. This summer, we had rain nearly all summer, and the 100 degree days did not really show up until September. I am gonna try to remember the “Don’t fash youself, hin,” That is the sweetest thing I have heard in a very long time.

Thank you so much for sharing. Hope you are well and safe and happy.

That’s a lovely story Anne. It brought a smile to my face! Even in Australia though, I remember when I moved from sunny Brisbane to 4 seasons in one day Melbourne I was amazed that Melbournians got out and did whatever despite the weather (after all it could be worse tomorrow – or in the next hour). We from Brisbane just waited til the next day – as we’d know the sun wouldn’t be far away!