If you go out in the woods today . . .  you probably won’t see many bears, but if you walk around your suburb, you might be surprised. Teddy bears are popping up all over. 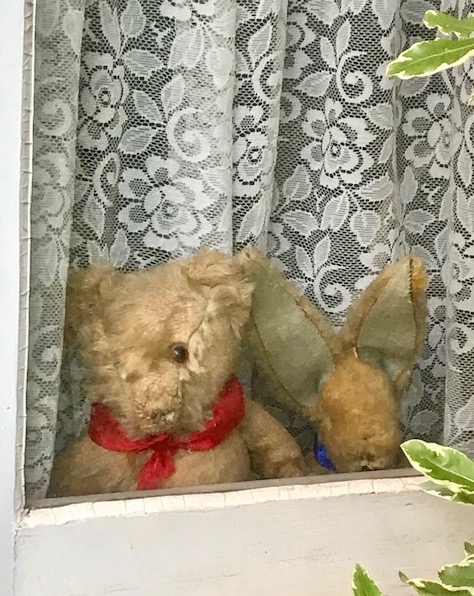 People are sitting a teddy bear in their front window, so that parents (or grandparents) with bored, cooped-up kids can walk around their local suburb on a #teddybearhunt. It’s a movement that has gone viral.

It’s happening in NZ and Australia, and my friend Patricia Rice tells me it’s been happening in her local Californian suburb for a while now. And elsewhere.

I love the idea. As well as something for the kids (and their carers) to do, it makes the local suburb seem so much friendlier. And it safely links people in this time of social isolation.

So I pulled out my ancient, beloved, balding, one-eyed Teddy with his equally ancient friend, Snoodle, the sheepskin rabbit and popped them in the window.

As I was tying on their respective ribbons, my dog Milly sniffed them both with enormous interest and a little excitement. But she can’t get to the windowsill, so Teddy and Snoodle are safe.

Do you have a bear in your window? Have you seen any teddies in your neighborhood?
And if you have a teddy, why not pop them in the window as a small friendly hello?

There are bears in the window.