Being Thankful for Firefighters

I hope the festive season is treating you well, though with bushfires here and blizzards and volcanoes elsewhere, and depressing political news pretty much everywhere, I think the only thing to do is to escape into a good book — if you can. 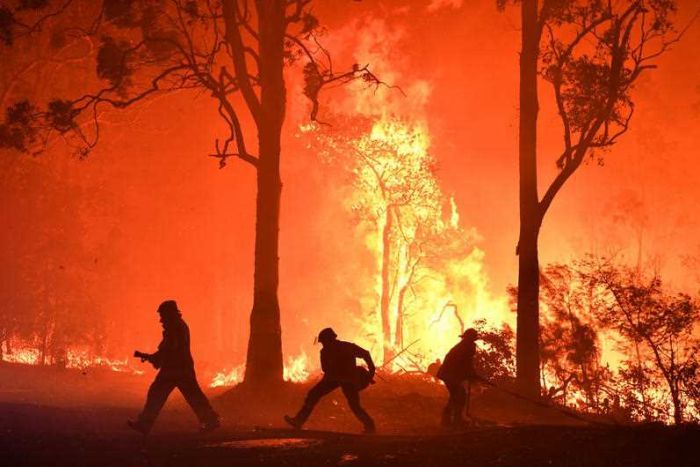 I’m sure you’ve all seen footage of the shocking bushfires in Australia. We don’t celebrate Thanksgiving in Australia, but if we did, I think it would be about thanking the brave firefighters who each year go out to battle this annual scourge in unimaginable conditions.

This year it’s an extreme season of bushfires — and it’s started early.  The worst of the bushfire season usually comes in late January and February, our hottest months, so I’m dreading what’s ahead.
(The source of the photo)

If you live overseas, you might not realize that most of our firefighters are unpaid volunteers — well trained volunteers, but still, volunteers, putting their time, energy and sometimes, tragically, their lives on the line for the sake of the community.  When a bushfire starts in their district, the call goes out and these brave men and women take (often unpaid) leave from their jobs and fight fires under appallingly hot and dangerous conditions. And at present, lots of firefighters who are not facing fire in their own districts are traveling north to lend a hand with the fires up there.

They’re fighting an unimaginable battle. “Among the firefighters facing enormous blazes burning across New South Wales are bakers, teachers, nurses, accountants, mechanics, retirees and full-time parents.” To read the rest of this article about the volunteers, click here.

We’re also thankful for the wonderful Canadian firefighters who have chosen to give up their own Christmas to come and fight fires on the other side of the world. More heroes.

So I’m feeling very thankful for our (and Canada’s)  wonderful “firies”. Thank you!

Merry Christmas, Anne. The forest fires have been truly terrible this season. Thank G-d for the brave firefighters. And I grieve for the poor koalas.

Anne
I’m in Perth WA and its great to see what you have to say about the firefighters in the east. We now have fire in WA straight after a cyclone And I am. Proud to call myself Australian. I’m also greatful for those who have come from overseas to assist with the fires through the nation. God Bless Them All as they fight the fire

May you have a Wonderful New Year Anne