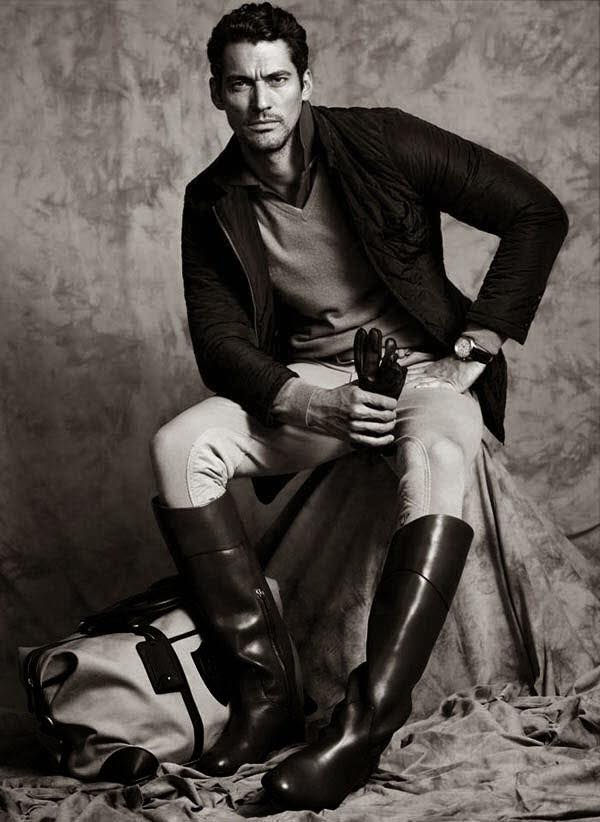 (The photo above is of David Gandy, modeling Massimo Dutti, the photograph is by Hunter & Gatti)

An excerpt from Marry In Scandal. The morning after the wedding night.

“Did you sleep well?” Galbraith was dressed for riding in buckskins and high polished riding boots. He’d shaved, which he wouldn’t normally do before a ride, but he was a married man now and the decencies had to be preserved. His hair was still damp.

Her eyes widened. She glanced at the window, where the sun was peeping in through the curtains. It was a glorious morning. “Now?” she asked.

It was as if the sun rose in her eyes. She glowed. “Yes, please.” She flung back the bedclothes and sat there, rosy and naked, a creamy mermaid in a welter of sheets. She made no move to get up, no move to dress herself. She simply sat in her bed, wearing nothing but a smile and an expectant look.

He moved to stand behind a chair. His body had reacted predictably to the sight of her naked loveliness. “Do you want me to ring for your maid?” he asked stiffly.

“No, of course not.” After a moment her smile faded, and became a look of puzzlement. “I thought you wanted ‘a ride.’.”

“I do. You don’t have to come if you don’t want to. I just thought, seeing it’s a beautiful morning, we should make the most of it. It could very well be raining by the afternoon.”

“Oh.” A blush suffused her whole upper body. It was fascinating. He tried not to stare. “You mean a ride?” She pulled the covers back over herself.

“What else would I be wanting to ride?” He tried not to let the sarcasm show.

“Nothing, it’s nothing.” Avoiding his gaze she said in a low, hurried voice, “Thank you, yes, I would love to go for a ride, and if you would please ring for a maid, I’ll put on my habit and be with you in a trice. I’ll meet you downstairs, shall I?”

He didn’t move. He stared at her, and his lips twitched in the beginning of a smile. “You thought ‘a ride’meant—?” He arched a brow suggestively. “Because I came to your bedchamber in my boots?”

“Y—no, I don’t know what I was thinking. I was half asleep. Now please ring for my m—” She was adorably flustered.

His smile grew. “You did. You thought I wanted to f—have marital relations with you in my boots, didn’t you?”

“Well, you did yesterday,” she said defensively. “How am I to know what you mean when you say and do such strange things?”

“Strange things?” He prowled slowly toward her.

Her face was flaming by now. “Well, you called what you did last night, ‘dessert’.”

“And it was delicious. Am I to take it that you wouldn’t object if I took you again this morning—boots and all?”

She looked up at him, earnest and very sweet. “Of course I wouldn’t mind. It was very nice yesterday, though I don’t think the housekeeper would be very happy about you wearing boots in bed—” She squeaked as he pounced on her.

“Nice, was it?” He edged her knees apart.

“Pah. I’ll show you something better than ‘nice.”