I say “a fave” rather than “my fave” because in fact there are several cartoonists whose work I love — Gary Larson, Leunig for instance, but today I’m writing about an Australian cartoonist called Judy Horacek whose work I really love.

But first some context. Some of you might know that I write on and off in a writing journal. It’s just a blue A5 spiral bound notebook, and I’ve been writing in them since 2007.  When I start each new journal, I stick a different picture on the front to make it individual to that year(s) (and blot out the company logo on the front.)

Usually I search the internet for a picture that speaks to me, then I print it off and stick it on the front cover. And sometimes I put a different one on the back cover.  However I haven’t yet set up my printer because I’m waiting for the bookshelves to be built so I can then set up the study properly. Since I write on my laptop, having access to the printer is not urgent. 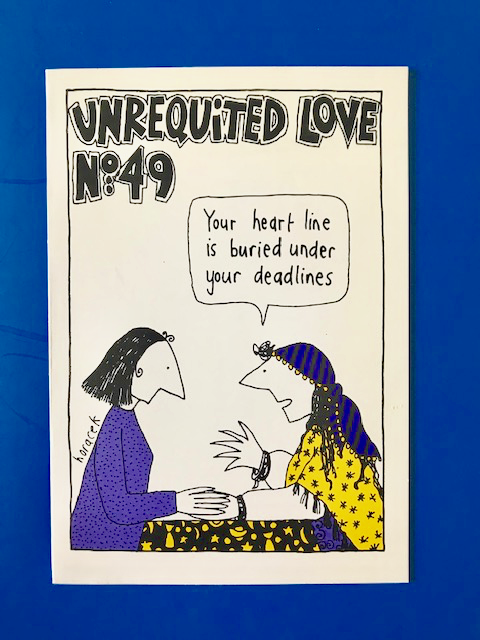 Now I’m about to start a new journal — my 11th, it’s not the sort of journal that has pre-set dates in it— and finding a picture to stick on the front is part of the pleasurable ritual of setting up the new journal (and yes I know it’s procrastination but I like it.) So  I was looking through an old stash of greeting cards and postcards that I’ve collected over the years—usually I choose a pretty picture—but this one made me snort when I saw it again.

“Unrequited Love #49”  is by one of my favorite aussie cartoonists, Judy Horacek, who created the wonderful “Woman with Altitude” card above.

That’s the card on the left, now stuck to the front of my blue journal— I took a photo of it.

You can read more about Judy Horacek here, and buy some of her cards on line. I think you’d really like her Christmas cards, too. Here’s one of my faves.

Do you have any favorite cartoonists? And do you keep a journal? 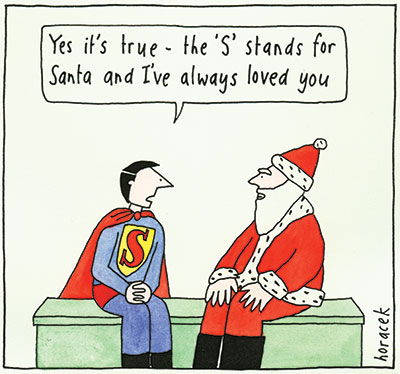 I am a premium member at gocomics.com and my favorite comic is breaking cat news. Georgia Dunn’s comic is loosely based on her real life with her cats, husband and two kids and it’s just wonderful. Her storylines are great, her artwork is really just so…it’s all watercolor and amazing. She’s also on Facebook and Instagram though I don’t have IG. But you don’t have to be a premium member to read her comics on go comics. I think you’d like her. I comment most days, I’m tigrisan there.

That cartoon is a bit close to home! I so admire how cartoonist can marry words to a simple picture so well.

I read comics every day – I have so many favorites – cannot select just one, but like tigrisan, I am a fan of Breaking Cat News. Another favorite is That is Priceless. Beautiful paintings get descriptions by Steve Melcher. I believe that me reading comics every day helps me thru each day. And it prevents me from wanting to beat some people over the head with a piece of damp pasta.

I’ve always loved the cartoons of Sandra Boynton. Here’s a link to some of her work. Maybe someone will remmeber “Hippo birdie two ewes”

Ms. Gracie – no wonder you are such a great author. You have so many varied and interesting interests!! pat