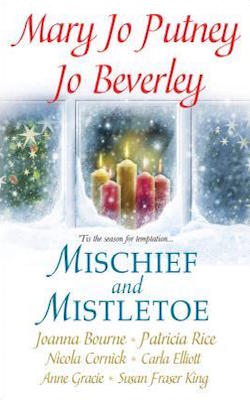 An anthology of 8 short stories, from the Word Wenches. I’ve read them all, and each is an excellent example of that author’s ‘voice.’ Together it’s a showcase of who we are. I’m very proud to be part of this group of wonderful writers.

My story, The Mistletoe Bride, is based on a mistaken identity premise.

“What you need is a dying woman.”

Ronan McAllister stopped in mid-pace and swung around. “What?”

Adams, his lawyer, shrugged. “If you don’t want to stay married, it’s your best option.”

Ronan frowned. “It’s a bit. . . cold-blooded, don’t you think? To marry a dying woman for the sake of an inheritance.”

The elderly lawyer spread his hands in a philosophical gesture. “You said you didn’t want to get married again.”

“Not necessarily. It might make things easier for her.”

“Dying women often fret about the people they leave behind; how they will live, the costs of the funeral and such things.” Adams adjusted his pince nez. “A payment in exchange for marriage could ease the way for such a woman to die in peace.”

Ronan resumed his pacing. He didn’t like it. It went against the grain to use someone’s death for his own gain. But. . . there was sense in what Adams had said.

A fee could ease the way for a dying woman.

Damn Great Aunt Agatha and her fortune. And her blasted conditions. The cheek of a maiden aunt requiring him to marry again before his thirtieth birthday. She’d never bothered to marry. She’d lived a life of blissful freedom, doing what she wanted, going where she chose, living life as the whim took her.

If he didn’t need the money so badly. . . He gazed out of the window. His work on the estate had only just begun. Over the last twenty years the tenants and estate workers had suffered from his father’s spendthrift ways and Ronan had sworn to put things right. But for that he needed Great Aunt Agatha’s money and the old witch had known it.

“How would it work?”

“My nephew lives in London,” Adams said. “He would find a suitable woman of respectable birth, dying, but not of anything contagious. We’d have her condition certified by a doctor, of course. We wouldn’t want any. . .. errors.” He gave a thin smile.

Ronan didn’t smile back. The whole thing was repugnant. But he’d do it. He had no choice. Since he’d inherited the estate, he’d worked every hour God sent, bringing it slowly back to productivity after years of neglect. Great Aunt Agatha’s fortune would make all the difference in the world.

Adams continued, “She will have to travel here, of course, since your great aunt’s will specified an Englishwoman and marriage in the chapel on the estate, so we’d send her a ticket on the mail coach—”

The lawyer raised his brows at this extravagance, but made a note. “Very well. As soon as we have a name, I shall procure a special license, and when she arrives the minister will perform a ceremony. After that it is a matter of . . .um. . . consummation and–”

Adams failed to meet Ronan’s gaze. “It is a legal requirement.”

There was a short silence. Ronan clenched his fists. He should have strangled Great Aunt Agatha while she was alive.

The lawyer went on, “It has occurred to me that if the woman were a widow. . . and you simply shared a bed. . . nobody would be able to prove otherwise.” He steepled his thin, white fingers and waited. Eventually he said, “All I need is your approval and I’ll go ahead and make all the arrangements.”

Ronan didn’t approve of any part of the scheme but he gave a curt nod. “Do it.”

« Return to The Mistletoe Bride