Excerpt: The King, The Queen, and the Mistress 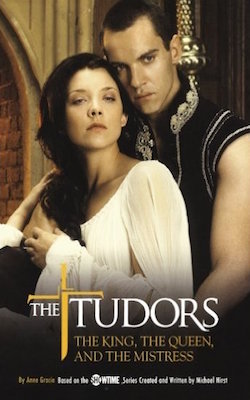 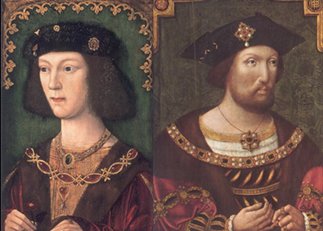 These two portraits of Henry show how he changed from a young boy of just 18, to a king in his prime at 29.

The tennis ball slammed off the black painted back walls in an unreturnable shot. From the crowded galleries came a burst of clapping. Henry smiled, enjoying the applause. He looked well, playing tennis, he knew. The ladies could hardly take their eyes off his strong thighs and muscular arms.

Henry, as usual, was winning today, paired with his close friend Charles Brandon, against cohorts Anthony Knivert and William Compton.

Henry had a passion for tennis; it was a fast, hard, aggressive game and he excelled at it. He’d had the tennis courts constructed some years earlier, along with a bowling alley, a cockpit, and a pheasant yard. His pleasure buildings he called them, perfect for when the weather was too wet or cold for hunting or hawking or jousting.

“And what took you to your house at Jericho last evening?” Brandon murmured as he positioned himself behind Henry for the next serve. “Or need I ask? Assuaging your grief, I believe.” He hit a return and added, barely missing a beat, “And how does Lady Blount?”

“She ‘does’ most satisfactorily, though she’s fretting.”

“Her husband is jealous. He’s threatening to send her to a nunnery.”

“A nunnery?” Brandon swore under his breath. “What a waste!”

They played several more points before Henry paused to wipe the sweat from his forehead with a handkerchief. He cast a speculative eye over the spectators. “The pretty little blonde, behind Norfolk,” he said to Brandon. “I haven’t seen her before.”

Brandon followed his gaze. “Lady Jane Howard. Norfolk has just brought her to court, as a lady-in-waiting to her Majesty. Ready?”

Henry nodded and they played on,. “Have you had her yet?” Henry asked.

Brandon grinned. “She has the sweetest, plumpest breasts… and she sighs when you kiss them.”

Laughing, Henry returned the serve in a winning shot. “Our game, I think, Anthony.”

“Actually, I’m playing as hard as I can!” Compton puffed.

“Now, there is someone I have to try,” Brandon murmured a short time later. “Look over there: middle gallery, blue dress. See her? See that exquisite, virginal face?”

Henry nodded. A sweet morsel indeed. “Who is she?”

Henry glanced up at the sweet face of the girl who sat next to her proud and haughty father, unaware that the king and his best friend were discussing her. “A hundred crowns you don’t succeed.”

Author’s Note: The young Henry VIII was passionately addicted to all forms of sport, to hawking and jousting and particularly to tennis. When the king played, courtiers sat in the galleries, watching and applauding, seeing and being seen. For more about the early form of Tennis, click here.

Dinner was served to King Henry and Queen Katherine in the King’s private apartments. Each dish was carried in by servants, tasted for poison by the official taster, then passed to the gentlemen of the privy chamber, who in turn passed it to the nobles who waited on the king and queen. This day, the Duke of Buckingham had the honor of serving the king while Lady Blount served Queen Katherine.

Flutes, recorders, a trombone and harp played from the gallery as the dishes passed before them; tender haunches of venison from the royal deer parks, roasts of beef, pheasant glazed with rose water, coneys roasted whole, and platters of vegetables, especially artichokes, for the King was fond of them.

Henry, as always, ate with good appetite. He’d passed a very active day. He glanced sideways at his queen. She merely picked at her food, waving most of it away. Once he’d thought her the most beautiful woman in England; now she looked old, so much older than he did. Such was the trouble when a young man married an older woman.

Of course the miscarriages had exhausted her. So many children, and only one still living.

“How is our daughter?” Henry asked her.

“She is well.” Despite her many years in England she still spoke with a marked Spanish accent. Once, Henry had found it charming.

“Her tutors say she has exceptional talents, especially for music.” She smiled at him. “Like her father. Your Majesty should be proud.”

Henry smiled back. “I am, sweetheart. You know it. Mary is the pearl of my world.” He gestured to Buckingham.

“Will you have some?” he asked his wife. She shook her head. Henry sliced into the succulent flesh and ate it delicately with knife and fingers.

“You have not answered my nephew’s letters,” Katherine said quietly.

Henry pretended not to hear her.

She persisted. “Why have you not answered his letters?”

“Just because your nephew is the King of Spain, does he think I have nothing better to do?”

“You know he advises you to sign a treaty with the Emperor recognizing France as your mutual enemy.”

“He also advises you not to heed everything Wolsey tells you, since Wolsey is so biased for the French.”

Henry snorted. “Since when are you a diplomat?

She raised her head proudly. “I am my father’s daughter!”

Henry clenched his fist and answered in an undertone. “You are my wife! You are not my minister, or my chancellor, but my wife.”

There was a pause, and aware that ears were craning to hear the soft, furious exchange, they both smiled.

Katherine leaned across and whispered in Henry’s ear, “And I should like to be your wife in every way. Will you not visit my bedchamber again, as you used to?”

Henry stilled, his appetite suddenly gone. He stared down at the turbot’s glassy eye for a long moment.

“This fish is not fresh,” he declared and pushed the plate away. 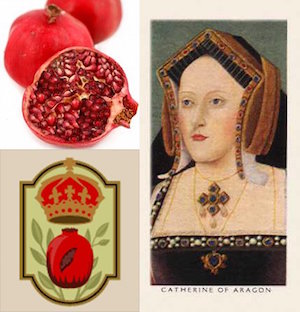 Later that evening, as Henry was being readied for bed, her words came back to him. He lifted his arm for one of the grooms of the bedchamber to tie up his nightgown. Another pulled back the curtains around the ornately carved tester bed while a third removed the warming pans.

A priest presented a jeweled crucifix to him. He kissed it, said a silent prayer and crossed himself.

His gaze wandered to a side table where a silver bowl containing various fruits. An attendant, anticipating his wants, seized the bowl and offered it to him. Henry wasn’t really hungry, more… restless, but he reached out absently, and found he had selected a pomegranate, perfectly ripe.

He sliced the fruit in half. For a moment he stared at the rich, moist, ruby flesh inside, plump with glistening seeds…

As Henry sucked out the fruit with relish, the servants fetched a dressing gown. Two more servants took flaming torches from the walls, and led Henry into the secret passage which connected his private apartments to Katherine’s.

How long had it been, Henry reflected as he strode down the corridor. A year? More? No matter. He had chosen a pomegranate, which was Katherine’s emblem, and it was ripe. God willing, old as she was, tonight he would get a son on her.

When Henry threw open the door that only he ever used, the Queen’s ladies fell into a flutter. As one, they dropped into a low curtsey. Among them was Lady Jane Howard, last seen applauding him at tennis.

“Your Majesty, we did not kn—”

“Welcome your Majesty. The queen did not expect—”

“Where is the queen?” Henry addressed Lady Jane. Up close she seemed even younger and more beautiful.

“Her Majesty is still at prayer, your Majesty.”

Henry paused. He stood, staring down at her. Her skin was like silk, luminous, milky white, her hair thick and glossy. From the tight, smooth bodice, a pair of pert breasts pressed eagerly. Fresh. Young.

Henry took a deep breath and came to a decision. “Tell her Majesty that I came to offer her my love and devotion, as her true husband.” He turned away, but as he did so he caught the eye of one of his own servants, who understood immediately.

As Henry returned through his private door, the man hurried over and whispered in Lady Jane’s ear.

A short time later Lady Jane was escorted into Henry’s bedchamber. She came to him, eyes downcast, slightly flushed and nervous, sank into a low curtsy and remained there. Henry made one swift gesture, and the servants instantly withdrew to the outer room.

He turned to Lady Jane and gently lifted her to her feet. “Jane,” he said softly. “Do you consent?”

Her blush deepened, flooding the milky breasts with a delicious pink. “Yes, your Majesty.”

« Return to The King, The Queen, and the Mistress

Highly readable and very entertaining. This novelization hits the show’s scandalous entanglements, teases out its conspiracies, and does justice to its violent beauty.