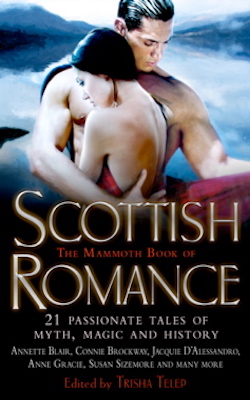 The girl scrutinised his face, then turned to look at each of his cousins. “Marriage?” she said eventually. “You’re proposing marriage to me? To me?”

In her dirty, mud-streaked face, her blue eyes gleamed bright with suspicion. “Why?”

Cameron shrugged. “I must marry someone. Why not you?” It was ridiculous when said aloud, but with the eyes of his cousins on him, he wasn’t going to back down. He’d never broken his word yet.

But he might not have to. The girl could still refuse. He waited.

Down the road the girl’s sheepdog barked. A sheep baaed in response. “You’re tetched in the head,” she told him. “You canna mean such a thing. Why, you never set eyes on me before today.”

“It sounds mad, I know, but it’s an honest offer I’m making ye,” Cameron told her.

Stunned, Jeannie Macleay chewed on her lip and stared at the solemn young man in front of her. He was asking her to marry him? It couldn’t possibly be true. He probably wouldn’t even recognize her if he met her again—she was all over mud, anyway. He was drunk, or tetched in the head, but… Marriage? The thought gave her pause.

She would have married almost anyone to get away from Uncle Ewen and the sheep. And suddenly, like something out of a dream, here was this tall, beautiful young man, asking her.

He’d wiped his face clean of mud. His cheekbones and jaw might have been cut with a blade, they were so perfect and sharp. His nose was bold and straight as a sword and his mouth firm and unsmiling. And his chin … her mother always used to say a man with a firm chin could be relied on.

Warrior stock, no doubt, like many folk in the highlands, of Viking descent. His hair was brown and sun-streaked yet his eyes weren’t Viking blue, but hazel. They watched her steadily, but she sensed an intensity beneath the calm manner.

He was well off, too, going by the quality of his clothes and his horse.

God knew why he’d even looked twice at her, with her in her uncle’s old coat and boots and covered in mud, but he had. And try as she might, she could not dismiss it. She pinched herself, hard, to be sure it wasn’t a dream.

“I don’t know you from Adam,” Jeannie said to silence the clamor in her head.

“My name is Cameron Fraser.”

Fraser. It was a common enough name around here.

Oh Lord. She ought not to even consider his proposal. The poor lad was no doubt a wee bit soft in the head, and his friends were too drunk to realize what he was doing.

But she was only human.

The choices loomed large in her head; life with Uncle Ewen, the stingiest, gloomiest, dourest man in all of Scotland— or life with this tall, solemn young man.

The rest of her life spent on the moors, half the time cold, wet and hungry, looking after Uncle Ewen’s sheep — or marriage to this beautiful young man who was probably tetched in the head to be offering marriage to her on so little acquaintance.

No choice at all.

People said better the devil you knew. Not Jeannie.

“Would I be its mistress?” It was the summit of her dreams — to have a home of her own, to be beholden to no-one. To belong.

He nodded. “My mother died when I was a bairn. You’d be the woman of the house.”

The woman of the house. There it was, her dream laid out for her. All she had to do was to say yes. She swallowed.

« Return to The Laird’s Vow