I can just see Giles ordering some of the delicious creamy confections and tasting their first ever ice cream. What a delight!.

Again and again in Regency-era books we read about people going to Gunters for an ice, and I have just such a scene in the Perfect Waltz. Today we take ice-cream for granted, but in the 1800s it was a very special treat. Icecream was expensive and hard to make — mostly because ice was so hard to come by (hauled down from the mountains and stored in underground ice-houses.) But they had a range of tastes that we don’t even consider now: Below are pictures of Georgian-style icecreams, from a fabulous site on Historic food.

Life in the Factories 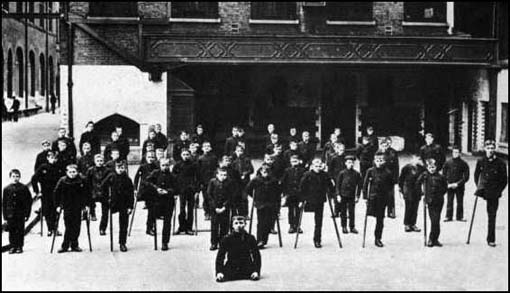 An unforgettable sight – crippled children in the yard of children’s home in London.
From: Child labour – 1740 – 1850

I love the glittering world of the fashionable regency era, but equally, I am fascinated by the darker aspects of the times. In those days the sons of gentlemen were not raised to work; they were leaders, born to rule — or at least that’s what many of them believed.

But what happened to those whose family riches had run out, who had no estate, no income? History is full of the stories– people who did everything possible to keep up the appearance of wealth, to continue living as “gentlemen” getting further and further into debt, or living off the charity of their families. Some even went abroad to hide their shame and maintain the lie. They did everything possible to survive — except take a job. Why? Because to take a paying job was to give up their place as a gentleman, to dash their pride in the dust, to betray everything their upbringing had taught them.

So what happened to the wives and children of such men?

This was what I wanted to explore in The Perfect Waltz. Sebastian was one of those people who had fallen through the cracks – the eldest son of a “gentleman gambler, who led his wife and four children into dire poverty, and then shot himself, leaving twelve year old Sebastian to care for the others as best he could. I speculated that he found work as a “factory brat.” I did a lot of research into the lives of such children.

Unfortunately it is not hard to find such information. It’s plentiful and it’s horrifying. Here’s a few samples, just from the web.

An account from David Rowland worked as a scavenger at a textile mill in Manchester.

Question: At what age did you commence working in a cotton mill?
Answer: Just when I had turned six.
Question: What employment had you in a mill in the first instance?
Answer: That of a scavenger.
Question: Will you explain the nature of the work that a scavenger has to do?
Answer: The scavenger has to take the brush and sweep under the wheels, and to be under the direction of the spinners and the piecers generally. I frequently had to be under the wheels, and in consequence of the perpetual motion of the machinery, I was liable to accidents constantly. I was very frequently obliged to lie flat, to avoid being run over or caught.

A little girl about seven years old, who job as scavenger, was to collect incessantly from the factory floor, the flying fragments of cotton that might impede the work… while the hissing machinery passed over her, and when this is skillfully done, and the head, body, and the outstretched limbs carefully glued to the floor, the steady moving, but threatening mass, may pass and repass over the dizzy head and trembling body without touching it. But accidents frequently occur; and many are the flaxen locks, rudely torn from infant heads, in the process.

An Account: (1) Dr. Ward from Manchester was interviewed about the health of textile workers on 25th March, 1819

When I was a surgeon in the infirmary, accidents were very often admitted to the infirmary, through the children’s hands and arms having being caught in the machinery; in many instances the muscles, and the skin is stripped down to the bone, and in some instances a finger or two might be lost. Last summer I visited Lever Street School. The number of children at that time in the school, who were employed in factories, was 106. The number of children who had received injuries from the machinery amounted to very nearly one half. There were forty-seven injured in this way.

If you have a strong stomach you can read several more horrendous accounts of accidents to factory children. (link provided was dead)

A snippet out of history…

The Prince Regent’s birth day was this year celebrated by the principal inhabitants of Bexhill, in rather a novel manner, by forming themselves into a GIPSEY PARTY. Early in the morning all was bustle – donkies, carts, old wigs, cloaks, hats, &c. &c. were put in requisition, and about eleven o’clock the party, (nearly all in some appropriate character) moved in procession, attended by a great concourse of spectators, to Coden Down, about three miles off, where tents were immediately pitched; an elegant cold PIC NIC collation, from the baskets of the party, was set forth on the grass, and very heartily partaken off – “Pleasure beamed from every eye, and mantled on every countenance,” and fortune telling commenced, and continued with great oracular skill, until the party was summoned to form a circle to take tea, coffee, &c. The novelty of the scene had by this time drawn great numbers of people to the spot, as spectators, and these were regaled with two barrels of strong beer by John Macgauly, esq. Dancing then commenced and was continued until the sun had reached the horizon, when the tents were struck, and the party, preceded by the music, FOOTED IT to the new assembly-rooms, at Bexhill, where the bewitching gipsey lassies, with each a partner, tript it on “light fantastic toe” until five in the morning, when the whole party retired, very much gratified with the novel diversion, and unanimously agreeing, the anniversary of their beloved Prince’s Birth-day shall be FOREVER celebrated at Bexhill, in a similar manner.

« Return to The Perfect Waltz

“…one of the best Regency-set historicals I’ve read in years, with a beautifully-developed love story at the center.”

“The Perfect Waltz is a definite keeper, and is one of the best romances I have read in a long time.”

— All About Romance, Jessica Langlois

“THE PERFECT WALTZ is much more than a simple dance of love; it’s a whole beautifully choreographed ballet of emotions… If you haven’t already discovered the powerfully moving romances of Anne Gracie, I can’t urge you strongly enough to hunt them up.”

” I can’t remember the last time I enjoyed a book so much. The characters are so rich and the story so refreshing, they reach deep into your heart. The dialogue is delightful and, at times, a hoot. I was simply enchanted by this wonderful book.”

“Duty vs. love is brilliantly battled as Anne Gracie writes the perfect historical.”