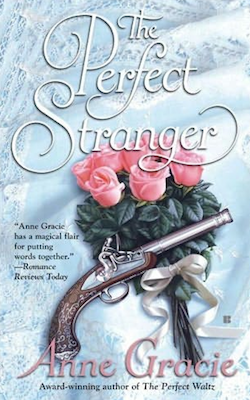 Voices. There were voices in the dark, in the sand hills. Men’s voices.

Faith sat up. A light bobbed in the sand hills above her. It was moving slowly, unevenly towards her hiding place.

“Où es-tu, ma jolie poulet?” Where are you, my pretty hen? The man sounded drunk, whoever he was.

She heard another man stumble in the dark, crashing into one of the low bushes that dotted the sand hills. He cursed. “Are you sure she’s here?” he asked in rough French.

“Oui. I watched her go in, and not come out. She’s waiting, snug in her little nest for us.” The speaker laughed coarsely. Two others laughed with him. Three men, maybe more.

Faith didn’t wait to be sure. She snatched up her homespun woolen cloak and her reticule and keeping low, began to creep away as fast as she could.

Behind her lay the town; before her, who knew? But she had no intention of heading back to town. Not at night. The town would offer her no sanctuary. She’d discovered that the hard way. The town was full of men like these. Men who’d driven her to hide in the sand hills in the first place.

There was no alternative. She made toward the beach.

“Là-bas!” Over there! They spotted her and gave chase.

It was too late to worry about noise. She ran as fast as she could, waving through scrubby bushes and low grasses. Her skirt caught on twigs and spiny thorns. She snatched it up in desperate fists and ran on. Sticks and thorns slashed at her legs, but she was oblivious. Behind her, men crashed through the undergrowth. They were gaining on her.

Thump! Faith tripped over a root and crashed into the ground. Pain exploded in her face. She lay on the sandy ground, winded, her empty lungs gasping frantically for breath that would not come. Finally air gushed back into her and she could breathe.

She scrambled to her feet and listened for her pursuers. And that’s when she heard it. Music. Soft, but not far away.

No choice. She could not let herself be run down, like a hare by hounds. She had to risk it. She would run, run to the music, and pray for safety.

Music had once been her refuge. And lately her downfall.

Risking everything for the sake of speed, she plunged onto the open beach, down to the very water’s edge where the sand was firmest. Shafts of pain jabbed her ankle with every step. She heard shouts as her pursuers spotted her. Faith ran, ran for her life, ran towards the music.

Her heavy boots slowed her down. They’d protected her feet in the rough scrub — her own slippers would never have stood that punishment — but now the boots were heavy and the soft sand sucked at them. No time to stop and take them off. Her breath came in great gasps. Pain bit sharply into her side. She ignored it and fled on.

She rounded a small headland. Fire glowed in the base of the sand hills. Lungs heaving, she ran towards it. A campfire. A cooking pot hung above it. Fishermen?

A solitary shadowed figure sat beside the fire, playing music softly; Spanish sounding music that rippled out into the night like water, or wine. A man. A gypsy? A huge dog rose out of the shadows. Faith froze. She’d had dogs set on her twice in the last week. This one was of a size to rip out her throat in one bite.

“Là-bas!” Her pursuers came crashing across the headland. Nothing, not even a hound from hell, could be worse than what these men planned. Terror drove her forward.

“Aidez-moi!” she gasped raggedly as she stumbled towards him. “Aidez-moi… je vous implore!” Help me, I beg of you!

The music stopped. The dog’s low growls blossomed into a frenzy of rage.

“Aidez-moi!” she gasped, her breath sobbing from exhausted lungs. The words came out as a whisper.

Somehow, he heard her. He held out his hand towards her, a dark lifeline etched in flame. “A moi, petite,” was all he said. To me, little one.

His voice was deep and calm and sure and it seemed to speak to something deep inside her. And so, despite the fact that she could not see his face, despite the huge snarling beast at his side, Faith gathered the last of her strength and stumbled towards him. He was so tall and solid, and that voice, she imagined, held strength and reassurance. He could be no worse than those behind her, she thought, and besides, she had reached the end of her tether.

The toe of her boot caught again in the undergrowth. Her bad ankle buckled and she pitched forward and crashed into the man. He caught her hard against his chest, but the impact knocked him backwards and brought him down, flat on his back.

She lay for a moment on top of him, exhausted, gasping for breath on his big, hard body. Beneath her, the man lay still, as if his breath, too had been knocked from him. His arms had closed around her. Hard, strong muscles. He smelled clean, of salt and wood smoke and soap. And man.

The dog barked again, but now its menace was directed into the darkness. Her pursuers must be almost here.

As she scrambled off him, Faith tried to think of the words in French to explain, to beg for help. Not a single word or phrase came to her frightened brain. She knelt beside him in the sand, struggling to pull her wits together.

His features were in shadow, silhouetted against the fire. “Mademoiselle?” His voice was harsh, deep.

Her mouth opened and closed helplessly. “I’m sorry, I’m sorry,” she whispered in English. “I can’t think of the words. Oh God!” She could not see his face. Her own was lit by his fire

Faith nodded. “Yes. Yes, I am. And you—” His words pierced the fog in her brain. He was English too.

“Thank God, thank God,” she whispered. Though why she should feel safer with him just because he was English as well as clean was a mystery. But somehow, she did.

The dog suddenly broke into a renewed frenzy of barking and she pulled herself together. “Those men, they’ll be here any minute—”

He did not so much glance away. He bent down and held out his hands to her. “Can you stand?” Distantly she realized he spoke with no hint of an accent. Spoke, in fact, with the tones of a gentleman.

She nodded, though her legs were shaking. He helped her to her feet with strong, gentle hands. She stared fearfully into the darkness. The dog snarled and growled, clearly sensing her pursuers, though they’d gone very quiet. “Enough, Wulf!” The dog ceased its barking but growls rumbled deep in its throat.

Three silhouettes were dimly visible against the glimmer of the sea and sky.

“So I presumed. But why are these ruffians chasing you? Did you steal—”

“No!” she said indignantly. “They want— they think— they think I am—”

His gaze ran over her, coldly assessing. “I understand,” he said in a clipped voice.

He did too, she could tell from his tone. She hung her head, too mortified to speak.

“Sit down over there, near the fire,” he ordered. “I’ll deal with them.”

“But there are three men! Maybe more.”

His teeth glinted in a savage smile. “Good.”

Good? Faith stared at the shadowed face, wishing she could see him properly. What could he possibly mean by good?

A voice from the darkness shouted roughly in French, “Hey, you there! That woman is ours.”

“Oui, give her back and there will be no trouble,” another added.

The tall man answered in French. “The woman is mine.”

The dog snarled, as if to reinforce his words.

The woman is mine. An implacable statement of fact.

« Return to The Perfect Stranger

Book three in Gracie’s “Perfect Series” is enchanting. Faith is an inspiring heroine as she conquers her fears and overcomes betrayal and heartache. And the way she battles her way into her new husband’s heart is equally entertaining and moving. SENSUAL

Anne Gracie possesses the rare talent of tugging the heartstrings and tickling the funnybone while creating lovable characters with individual personalities, even for minor characters. (snip) For RRT’s Perfect 10s to have the strongest meaning, we all try to be as stingy as possible with them. I don’t know how I refrained from giving 10s to the first two of Anne Gracie’s Perfect series, but THE PERFECT STRANGER certainly merits one. It’s rare to find a novel that’s so moving and entertaining at the same time. (snip) I’d give a 10 to the whole series if that were possible. Be sure to add A PERFECT STRANGER to your reading list and, if you haven’t already read them, add the first two books as well. After all, there is no such thing as too much perfection.

As Faith gives up her dreams of a dashing romance, she finds something even better in the arms of her husband. Their physical relationship is spicy and sensual, and it’s through this vehicle of attraction that Nicholas finds he’s becoming as bound to Faith as she is to him. Lovely. The Perfect Stranger will definitely satisfy readers’ appetites for a poignant, tender romance.

If like me, you love Anne Gracie’s stories, you should not miss this book. It definitely goes to my keeper shelf.