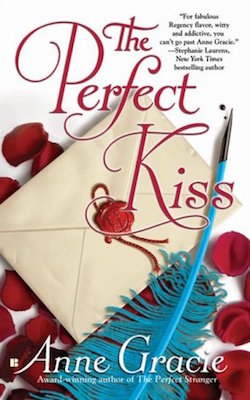 Grace’s timid friend, Melly Pettifer is being forced to marry Dominic Wolfe, Lord D’Acre. who stands to inherit the huge estate of Wolfestone when he weds her. The Wolfes have a terrible reputation, and if there’s one thing Grace cannot stand, it’s a girl being bullied.

Disguised as Melly’s maid-companion and calling herself Greystoke, Grace travels to Wolfestone with Melly and her father, Sir John Pettifer, in a hired coach driven by a drunken postilian. The coach overturns in the drivewayjust as a storm begins. The shaken occupants are trapped. Grace climbs out the window and runs for help.

Grace put her head down against the driving rain and started running up the drive to the big gray house. Not a single light burned. Of course, it was still afternoon; the darkness was because of the storm. But it didn’t look promising.

She ran up the front steps. There was a snarling wolf’s-head knocker and a brass bell pull. She banged the knocker and pulled hard on the door-pull. She pressed her ear against the door and could hear a faint chiming in the distance. She waited. She tried again. But nobody opened the door.

It looked like there was nobody in residence. But how could that be? This was Melly’s bridal visit.

No time to wonder. She ran round the side, following the drive and found several likely-looking back doors. She banged on them, but there was no response. Every one was locked.

Had the drunken postilion brought them to the right house? The place was deserted.

Across one side of the cobbled courtyard she could see a bedraggled looking kitchen garden. On the other was a large stone building with an arched entrance. Stables. Lungs heaving, she ran on.

Inside she paused to let her eyes adjust to the gloom. The wind dropped for a moment and Grace heard a whinny and the sound of a man’s voice, deep and low. She ran toward it and as she reached the line of open-topped stalls she heard the voice again. It was too muffled for her to make out any words, but it didn’t sound like English.

“Help!” Grace called loudly. “Help me please! There’s been an accident and I need help!”

A man looked out over a half-stable door. “Where the devil did you spring from?” He spoke with an accent she could not place.

His looks made her catch her breath. No, it was the running, she told herself. He was a disgrace.

He was tall, his face was dirty and unshaven and his thick black hair was tousled and in need of a cut. His face was severe, all hard angles and planes, lean and . . . hungry looking.

He stared back at her with strange, cold, yellow eyes, his expression impatient. “I suppose you’ve come about the mares.” His gaze ran over her, lingering insolently on the parts where her wet clothes clung. And the strange golden eyes glowed.

Grace did not care. “I don’t know anything about any mares. I need help. There’s been an accident.”

His gaze snapped to her face. “What sort of accident?”

“Our carriage has overturned. On the driveway below.”

He muttered something under his breath. It wasn’t English. “Is anyone hurt?”

“No, not really, but they’re stuck in the carriage and the postilion has run away. He was drunk! You must come, now!”

He considered her words. “So, nobody is dead? Or bleeding?”

“No,” she said, frustrated. “But the door is blocked by the ground and they cannot get out. You must come at once!”

“Any horses injured?” He came out of the stall.

He might be a gypsy, she thought. He was dark enough for it. He wore no coat. He was dressed in mud-smeared high boots and stained buckskin breeches. His shirt, too was soiled, the sleeves rolled up over sinewy, tanned forearms. She didn’t care. He looked strong and capable and that’s what counted at the moment.

“No, they’re all right. Please hurry!”

“Who did you say you were?” He fastened the door behind him with deliberate care

She almost wept with impatience. She stamped her foot instead. “My name is Greystoke and who I am is of no importance!”

“Oh, I wouldn’t say that. Now calm down, Greystoke. Nobody has been hurt. I’m coming. Everything will be all right.” His voice was deep and calm and confident.

She tried to convey some sense of urgency. “Miss Pettifer— in the carriage—” She gestured vaguely down the drive. “Miss Pettifer is Lord D’Acre’s affianced wife and soon to be your mistress, so please inform your master, at once!”

“I call no man master.” His calmness was infuriating. His eyes bored into Grace, amusement dancing in their depths. “But I wouldn’t mind a mistress. Are you soon to be my mistress, too, Greystoke?” He hitched up his buckskin breeches. “I could do with a mistress. It’s been a while.”

Grace was scandalized. But she knew better than to bandy words with a golden-eyed, mannerless gypsy devil. She said crisply, “You have no manners and your mind needs as good a scrubbing as the rest of you! Now hurry!”

He gave her a faint, wholly wicked smile and moved purposefully forward. At last! she thought, but then he marched right up to her and suddenly he was close. Too close for comfort and before she could react he had her face cupped in his hands and all she could see was his eyes. They were an odd color, a light golden amber, ringed with a thin black line. They gleamed under slanted black brows.

She was trapped. Like a rabbit facing a wolf. Too shocked to move.

His gaze roamed over her face like a caress. “Are those freckles real?” he asked softly. His voice resonated through her. To her surprise he didn’t smell dirty at all, just a bit horsey, which wasn’t surprising. And very masculine.

She pushed back at him. “Stop that at once! There’s been a coach accident!” she reminded him in as stern a voice as she could manage.

“But nobody is hurt,” he said and kissed her. It was swift and hard but Grace felt it right through to her very bones.

He released her and stood staring down at her, a blank look on his face. “Now that I didn’t expect,” he murmured. “Or was it perhaps, a fluke?”

Grace tried to step away from him. She reeled, staggering. There was something wrong with her legs. She clutched his arm to steady herself. He felt hard and warm and very strong.

Thunder rumbled across the skies. It jolted her back to reality. She rallied, pulled back, wiped her mouth and glared at him. Realizing she still held onto his arm, she used it to tug him toward the door. “There has been a coach accident.”

“Yes, you said. Nobody is hurt and they are stuck in the coach, out of the rain. And in the meantime, I just need to check something.” And he kissed her again, a brief, hard kiss that —again— sucked every coherent thought from her brain. And — again— when he released her she was dazed and dizzy.

“So,” he said on a long note of discovery. “Not a fluke at all. Well, who’d have expected that?” He steadied her, smiling.

The smile was the essence of male satisfaction.

She kicked him hard on the shin.

She kicked him again, harder.

“It would have more effect if I weren’t wearing boots,” he said in an apologetic tone.

She thumped him on the arm. “Listen, you impossible gypsy! There has been a coach accident and—”

He gave a start of theatrical surprise. “A coach accident? Well, why didn’t you say so?” And before Grace could say another word he’d seized her hand, whirled her out of the door, and started to run. Grace found herself practically flying over the ground, panting and slipping, taking two paces for every one of his.

“So, after this is over, will you give me the good scrubbing you promised me?” he said as they ran. The look he gave her scrambled her brains for a moment.

“No!” she gasped as she flew down the driveway. Her feet barely touched the ground.

“No? Oh well,” A slow grin cracked across his dark, unshaven face. “Let me know when it suits you, then.”

« Return to The Perfect Kiss

“a powerfully emotional, steal-your-heart story… This magical romance not only warms your heart, it raises your temperature too. Brava!”

“Another totally perfect Regency romance from this talented author.”

“romance at its best… I was captivated by this story … Rush out and pick up this book you won’t be disappointed.”

“The Perfect Kiss” is a lovely treat.”