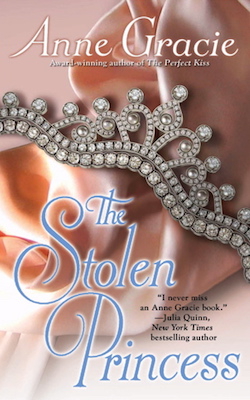 “I have no plans to marry again,” Callie told him. “Not ever. Not to anyone.”

He heaved a sigh. “That’s my hopes and dreams dashed forever, then.”

They walked on. It had been a good thing to set him straight, Callie thought. Best to get it clear and out in the open. No misunderstandings. He’d stop bothering her now. He’d leave her alone, and that would be a good thing.

It would. She’d be much happier. She really would. She didn’t need to be… bothered.

He was a very… bothersome man.

She darted him a sidelong glance. He’d been silent for several moments now. She hoped he wasn’t too crushed by her announcement.

He caught her looking. “So,” he said. “You’re absolutely sure? No plans to marry again?”

“Then you’ll just have to become my mistress.”

She stopped short, scandalized. She whirled to face him. His eyes were laughing at her. He was teasing her, she realized.

The way he laughed with his eyes, laughing and seeming to… caress… at the same time… it was most disconcerting.

“You are joking,” she told him.

“Yes, for you know perfectly well I am a respectable widow—”

“Oh, we needn’t tell anyone, if that’s what you’re worried about.”

She gave him a severe look. “I told you, I have no desire to put myself under the thumb of any man, ever again.”

“But it wasn’t my thumb I was thinking of.” He said it with such a— such a wicked, laughing look she was hard put to know what to say. So she turned on her heel and walked off.

It took her several minutes of marching along as fast as her legs could carry her before she was able to think at all, let alone think of an appropriately crushing, yet dignified response. His words, along with that laughing smile in his eyes, were a pure invitation to sin. She snorted. Nothing pure about it!

She could hear him coming up behind her on the path. She quickened her pace. His didn’t seem to alter, and yet he still gained on her. It wasn’t fair that he should have such long, strong legs and hers should be short and plump. The only way to escape him would be to run, but she wouldn’t put it past him to run after her. The wretch probably would enjoy chasing her.

A small voice inside her suggested timidly that she might find it exciting, too. She ruthlessly squashed it.

She deliberately slowed her pace and stopped to stare earnestly at a flower in the grass. She had no idea what it was; she’d never been any good at botany, but he needn’t know that.

He stopped beside her and waited. She felt the warm wash of his gaze flow over her. And ignored it. She stared hard at the flower. He bent and peered at it over her shoulder.

“Fascinating,” she murmured, trying not to be aware of the proximity of his big, masculine body.

“Utterly,” he agreed fervently. “Something special, do you think?”

She frowned thoughtfully, and then nodded over the small, blue-flowered plant. “It could well be,” she said, hoping he was no botanist.

“It definitely could be,” he agreed. “If only Creeping Charley was not regarded as a weed in England.” He paused a moment, then added, “Shall I get someone to pull it out before it spreads, or would you rather paint it, or press it in your “Weeds of England” scrapbook?”

She continued the walk in dignified silence. He strolled along beside her.

“Getting to know each other like this,” he continued unabashed. “Learning about your fascination with English weeds… and your fear of thumbs.”

“You deliberately misunderstood me.”

“Oh, don’t play the innocent with me!”

“Never, my sweet. Innocence is over-rated, I quite agree.”

He said it with that— that look. She felt herself flushing. “And don’t call me my sweet, either.”

“Or that. And you know perfectly well what I meant by not wanting to be under the thumb. My entire life has been spent under the rule of two extremely autocratic men — first my father and then my husband. Now I have had my first ever taste of freedom, and nothing — no man —could ever taste sweeter than that.”

“Is that a challenge?” he said softly.

“I wasn’t,” he said in a meek voice, but his eyes were dancing.

It was the color, she thought irrelevantly. She’d never seen such blue, blue eyes. Like sunlight sparkling on the sea. Another thing that wasn’t fair. Men shouldn’t be allowed to have eyes like that.

They walked on and, as they turned a corner, the house came into view. Thank goodness, Callie thought. She might have been walking on a firm graveled path, but it had felt in some ways like she’d been negotiating a marsh, full of traps for the unwary.

He was a very dangerous man! She glanced at him and found him watching her.

Callie could not imagine what he was talking about. “Relieved?”

“That you’re not afraid of my thumbs. I think they’re quite nice thumbs — for thumbs, that is. Don’t you think?” He spread his hands out for her to inspect, and though it was clearly ridiculous, she couldn’t help glancing at his hands.

“What do you think?” he asked.

She gave them a second critical look and sniffed. “All I can see is that your thumbs are rather large,” she said in a quelling voice.

He gave her a slow smile. “Exactly.”

Callie had no idea why she should blush, but she did. “I think our breakfast will be ready now,” she said and marched briskly back to the breakfast room.

He strolled along beside her. “Yes, I’m ravenous.” The way he said it, he didn’t just mean for food.

« Return to The Stolen Princess

“Captivating historical romance with wonderful characters… I love all of Ms. Gracie’s stories and THE STOLEN PRINCESS is no exception. It stole my heart, as it will yours.”

“Gracie begins the Devil Riders series with a fast-paced and enticing tale about a princess on the run and the enigmatic man who gallantly comes to the rescue. She captures both the inherent tension of the story and the era with her hallmark charm and graceful prose.”

“THE STOLEN PRINCESS… is as filled with warmth, humor, and lovable characters as any other of her titles. Though excellent characterization is a hallmark of Ms. Gracie’s books, her plots superbly showcase the humanity of her creations. Anne Gracie’s talent is as consistent as it is huge. I highly recommend THE STOLEN PRINCESS and look forward to the rest of the series.”

“I absolutely loved The Stolen Princess and I am definitely recommending it to you!”