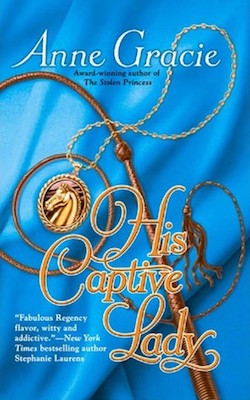 It’s a cold, wet day and Harry and his friend, Ethan Delaney, are riding though the forest when they see a girl sitting on the back of a slow-moving carter’s dray.

She’s drenched and muddy, her skin moon-pale and glistening, her hair dripping with rain… and Harry is transfixed… He rides closer. He’s so bowled over by her, he can’t think of a thing to say. But she’s getting wet so, without a word, he leans over and places his hat on her head. And he sees her small, cold-roughened hands clinging to the side of the cart, and he gives her his fur-lined gloves, still warm from his hands.

“Well, that’s a turn-up for the books,” Ethan said as Harry joined him. “Givin’ away hats now, is it? I thought that was your favorite.” His gaze dropped to Harry’s bare hands. “And, no —tell me not your gloves, your Polish fur-lined gloves. I’ve envied you those gloves for years.

Harry shrugged. “She was cold. And wet.” He wasn’t quite sure what had got into him either.

Ethan snorted. “I’m cold and wet, dammit. Colder and wetter because of the snail’s pace you adopted beside that blasted dray. I’ve been practically frozen many a time since I’ve known you and I’m supposed to be your friend. If you’d wanted to give away those gloves you could have given them to me.”

Harry said nothing. He wasn’t going to add to Ethan’s enjoyment of the situation by trying to explain the unexplainable.

Ethan persisted, an irritatingly knowing smile on his battered face, “Harry Morant, we’ve traveled the length and breadth of the peninsular for years, in ice and snow, through battles and burning heat and I’ve never known you to give away a good pair of gloves, or your favorite hat.”

“That was different. I needed them then.”

Ethan gave him an incredulous look. “And you don’t need them now? Man, it’s pissing down if you haven’t noticed.”

Harry had noticed. He pulled his collar higher and rode on.

“She wouldn’t tell you?”

“Well, where does she live?”

“God give me strength. And what did you say — no don’t tell me, nothing, or as good as.”

“Not everybody is as garrulous as yourself, Delaney.”

“No, but Harry-lad, even stumps have to talk if they’re to find themselves a woman.”

Harry said stiffly, “My aunt is finding me a wife as we speak.” He wasn’t ‘finding himself a woman.’ The girl on the cart looked pathetic, that was all. And he just. . . gave away his hat.

“Your aunt,” Ethan said in deep disgust. “What kind of man gets his aunt to find him a bride?”

Ethan made a rude sound. “And you with that pretty face of yours — why, the women line up for you, man!”

“I saw ’em at that ball for your brother’s weddin’, hangin’ around you like Spanish flies hang around meat. Now if it was me, with my ugly mug, I’d understand bringin’ in an aunt, but you. . .” He shook his head.

“They were about as welcome as Spanish flies,” Harry told him.

Ethan exploded with laughter. “Pull the other one, boyo. I heard you creepin’ in around dawn every other morning, smellin’ of some lovely’s perfume — and a different perfume every time.”

“That was the trouble,” Harry muttered.

“Lord grant me such trouble.”

“They didn’t want me,” Harry said.

“They weren’t even interested in talking to me.” They’d made Harry feel like a —what was the word the Italians had for it? —gigolo. Called to my lady’s bed at my lady’s whim, but never invited for dinner, never a ride in the park. And of course, never a dance, for with his bad leg he looked a sight on the dance floor.

Harry gave him a look. Ethan laughed and patted Harry’s cheek. “As silver-tongued as the black stump you are, me lad, but at least the ladies appreciated your other qualities.”

Harry shrugged. “It was just bed-sport.” They might have been ladies, but they’d never treated him as an equal, as a gentleman. Just a gentleman’s by-blow.

Harry couldn’t help but smile. “No, but it was harder than you think.”

Ethan glanced at Harry’s crotch and said, “Well it would have to be, the amount of use it got.”

They both laughed. They rode in silence for a short while, then Harry said, “Every single one of them was married.”

“Well, that’s only reasonable, isn’t it? You wouldn’t want to be ruinin’ a virgin, now, would you? I’m sure those those fine London ladies had done their duty by their husbands and produced an heir or two, so what’s the harm in them havin’ a little fun with a good-lookin’ young feller like yourself?”

Harry thought about it. “They’d made vows, Ethan.”

“Aye, but they’d probably no choice in the matter. You know how it is with the aristocracy — they arrange these things. It’s only lucky peasants like meself who get the luxury of marryin’ for love.”

Harry seized the opportunity to turn the conversation away from himself. “If it’s so wonderful, Ethan, why have you never married?”

“Too busy up till now, fightin’ wars for poor, mad, Farmer George. But don’t you worry, I’ve got me eye on a little filly. I’ll be married before the year’s out, count on it.”

“You? Who?” Harry was surprised. He couldn’t think of anyone, any girl or woman who Ethan had been seeing lately. “Anyone I know?”

“Ah, well, that would be tellin’, and I won’t be tellin’ until the lass herself agrees.” He gave Harry a rueful grin. “She’s not an easy lass like yon London ladies – takin’ a great deal of difficult wooin’ my girl is.”

“Difficult wooing?” Harry couldn’t believe Ethan was serious. If Ethan was walking out with a woman, surely he’d have noticed?

“Aye, no doubt it’s a foreign concept for you, boyo, with that face of yours, but we lesser mortals are obliged to woo our intended. I’m gettin’ quite practiced at it — want me to give you a few pointers so you can woo a fine aristocratic lady of your own?”

“But you’ll still be after makin’ an arranged marriage?”

Ethan pursed his lips thoughtfully. “I’m just bog Irish, so what I know about the aristocracy or the middle classes you could fit on the head of a pin, but it strikes me that any lass that’s been pushed into a marriage of convenience would be more likely to develop a wanderin’ eye a few years down the track than a lass that married for love.”

“I’m not marrying for love. It’s all rubbish, anyway.”

Ethan gave him a considering look. “Ah yes, I remember hearing something about that. Lady Andrea or Anthea — some name like that, wasn’t it?”

“I was a foolish boy then,” Harry said curtly. “I’m done with all that nonsense. I’m a practical man, now.”

“Oh aye, of course you are,” Ethan agreed. “That’s why your hair is sopping wet and your hands are frozen.”

« Return to His Captive Lady

“I have already read this book twice and I know I’ll return to it again and again. Anne Gracie has created a deeply emotional, at times heart-wrenching, journey for these two people who must learn to trust one another with their deepest feelings and darkest fears. I cried when Nell finally shared her secret with Harry…”

“HIS CAPTIVE LADY is Anne Gracie at her best, and her best is very good. She has a lyrical writing style reminiscent of Mary Balogh, and the talent to bring readers vibrant characters, potent plots and sizzling sensuality…YUM!”

“It’s a winner… a charming, witty and magical romance… Anne Gracie is a treasure.”

“It’s honest, charming, and everything I love in a historical romance…Very highly recommended.”

“It’s little short of magic … a delightful romance with a serious quest at its heart.”

“Once again, author Anne Gracie has proven what an exceptionally gifted author is all about when she gives life to unforgettable characters and brings her readers along for the ride in what has proven to be an exciting, fun, and heartfelt emotional journey. Absolutely one of the best romances I’ve read this year!”