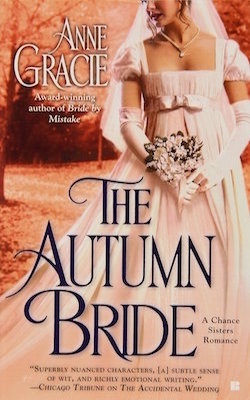 She was running late. Abigail Chantry quickened her pace. Her half day off,  and though it was damp and squally and cold outside, she’d taken herself off as usual to continue her explorations of London.

Truth to tell, if her employers had lived in the bleakest, most remote part of the Yorkshire moors, Abby would still have removed herself from their vicinity on her fortnightly half day off. Mrs. Mason believed a governess should be useful, as well as educational, and saw no reason why, on Miss Chantry’s half day, she should not do a little mending for her employer, or better still, take the children with her on her outings.

What need did a governess, especially one who was orphaned, after all, have for free time?

Miss Chantry did not agree. So, rain, hail or snow, she absented herself from the Mason house the moment after the clock in the hall chimed noon, returning a few minutes before six to resume her duties.

Having spent most of her life in the country, Abby was loving her forays into this enormous city, discovering all kinds of wonderful places. Last week she’d found a bookshop where the owner let her read to her heart’s content without pressuring her to buy—only the secondhand books, of course, not the new ones whose pages had not yet been cut. She’d returned there today, and had become so lost in a story—The Monk—deliciously bloodcurdling—that now she was running late.

If she returned even one minute after six, Mr. Mason would dock her wages by a full day. It had happened before, and no amount of argument would budge him.

She turned the corner into the Masons’ street and glanced up at the nearby clock tower. Oh, Lord,three minutes to go. Abby picked up speed.

“Abby Chantry?” A young woman, a maidservant by her garments, limped toward her with an uneven gait. She’d been waiting opposite the Masons’ house.

Abby eyed her warily. “Yes?” Apart from her employers, Abby knew no one in London. And nobody here called her Abby.

“I got a message from your sister.” She spoke with a rough London accent.

Her mouth was swollen and a large bruise darkened her cheek.

“My sister?” It wasn’t possible. Jane was hundreds of miles away. She’d just left the Pillbury Home for the Daughters of Distressed Gentlewomen, near Cheltenham, to take up a position as companion to a vicar’s mother in Hereford.

“She told me where to find you. I’m Daisy.” The girl took Abby’s arm and tugged. “You gotta come with me. Jane’s in trouble—bad trouble—and you gotta come now.”

Abby hesitated. The girl’s bruised and battered face didn’t inspire confidence. The newspapers were full of the terrible crimes that took place in London: murders, white slavery, pickpockets and burglars. She’d even read about people hit over the head in a dark alley, stripped and left for dead, just for their clothing.

But Abby wore a dull gray homemade dress that practically shouted “governess.” She couldn’t imagine anyone wanting to steal it. And she was thin, plain and clever, rather than pretty, which ruled out white slavers. She had no money or valuables and, apart from the Mason family, she knew no one in London, so could hardly inspire murder.

And this girl knew her name, and Jane’s. And Abby’s address. Abby glanced at the clock. A minute to six. But what did the loss of a day’s wages matter when her little sister was in London and in trouble? Jane was not yet eighteen.

“All right, I’ll come.” She gave in to Daisy’s tugging and they hurried down the street. “Where is my sister?”

“In a bad place,” Daisy said cryptically, stumping rapidly along with an ungainly gait. Crippled or the result of the beating she’d received? Abby wondered. Whichever, it didn’t seem to slow her down.

“What kind of bad place?”

Daisy didn’t respond. She led Abby through a maze of streets, cutting down back alleys and leading her into an area Abby had never felt tempted to explore.

Daisy glanced at her sideways. “A broffel, miss!”

“A broff—” Abby broke off, horrified. “You mean a brothel?”

Abby stopped dead. “Then it can’t be my sister; Jane would never enter a brothel.” But even as she said it, she knew the truth. Her baby sister was in a brothel.

“Yeah, well, she didn’t have no choice in the matter. She come ’ere straight from some orphanage in the country. Drugged, she was. She give me your address and arst me to get a message to you. And we ain’t got much time, so hurry.”

Numb with shock, and sick at the thought, Abby allowed herself to be led down side streets and alleyways. Jane was supposed to be in a vicarage in Hereford. How could she possibly have ended up in a London brothel? Drugged, she was. How?

They turned into a narrow street lined with shabby houses, and slowed. “That’s it.” Daisy gestured to a tall house, a good deal smarter than the others, with a freshly painted black door and windows curtained in crimson fabric. The ground-story windows were unbarred, but the higher ones were all barred. To keep people in, rather than out. She didn’t have no choice.

As she stared up, she saw a movement at one of the highest windows. A glimpse of golden hair, two palms pressed against the glass framing a young woman the image of Abby’s mother.

Abby hadn’t seen her sister for six years, but there was no doubt in her heart. Jane!

Someone pulled Jane back out of sight and closed the curtains.

Her sister was a prisoner in that house. Abby hurried across the street and started up the front stairs. Daisy grabbed her by the skirt and pulled her backward.

“No, miss!” Her voice held so much urgency it stopped Abby dead. “If you go in there arstin’ questions now, it’ll only make things worse. You might never see your sister again!”

“Then I’ll fetch a constable or a magistrate to sort out this matter.”

“Do that and for certain sure you’ll never see your sister again. He—Mort—him who owns this place and all the girls in it now”—she jerked her chin toward the upstairs—“he pays blokes to warn him. Before any constable can get here your sister will be long gone.”

Abby felt sick. “But what can I do? I must get her out of there.”

« Return to The Autumn Bride 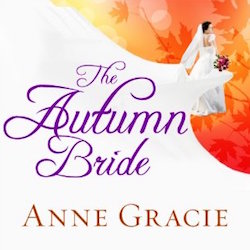 The Autumn Bride is now available on audiobook from these online booksellers:

“Gracie . . . charms and entices with this launch of the Regency-era Chance Sisters series. . . . Layers of secrets and deft characterization make for a deep, rich story that will leave readers starry-eyed.”

A complex, charming heartwarmer that celebrates love, brave heroines and the miracle of second chances.”

“With a pair of beautifully matched protagonists and some particularly despicable villains, this funny, dangerously addictive page-turner is a hands-down Regency winner; the rest of the series can’t come fast enough.”

“Readers will want to take a a chance on this delightful, heartwarming series about sisters of the heart, family, friends, and the fun and passion of romance. Gracie lifts readers’ spirits, creating a delightful cast of characters, tender moments and lighthearted repartee designed to tug at the heart. Keep a hankie handy for tears of laughter and joy.”

“I honestly can’t remember the last time I’ve enjoyed a book quite this much. The Autumn Bride is a story for readers who like their romance with just the right touch of humor along with a bit of intrigue to keep it exciting. I predict The Autumn Bride is going to be “THE” book to add to the TBR list of Historical Romance fans everywhere.”

“I loved this romp through the nineteenth century, an entertaining rags to riches story.”