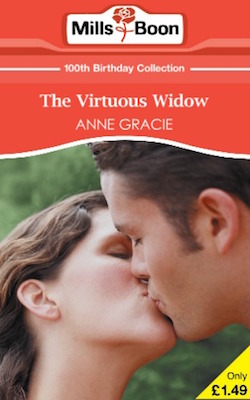 It is almost Christmas, 1816, but there will be no feasting and family celebration for Ellie Carmichael, an isolated young widow, left destitute when her husband committed suicide to avoid his debts. All she has is her beloved small daughter, four year old Amy, who has never accepted her father’s death, and puts a candle in the window “to guide my papa home”.

Ellie looked at her sleeping daughter and her heart filled. There was nothing more precious in the world than this child of hers. She picked up the candle and went into her own room. Shivering in the bitter December cold, she hurriedly slipped into her thick, flannel night-gown and climbed into bed.

She was about to blow the candle out when she recalled the one burning in the downstairs window. Candles were expensive. She couldn’t afford to let one burn down to a stub for no purpose. No practical purpose, that is. She recalled her daughter’s face, freshly washed for bed and luminous with hope as she placed the candle in the window. A lump filled Ellie’s throat. She got out of bed, slipped her shoes back on and flung a shawl around her for warmth. She could not afford the happy dreams that came so easily to children.

She was half way down the steep, narrow staircase, when suddenly a loud thump rattled the door of her cottage. She froze and waited. Bitter cold crept around her, insidious drafts of freezing air nibbling at her bare legs. She scarcely noticed.

The thump came again. It sounded like a fist hitting the door. Ellie did not move. She hardly dared to breathe. There was a swirl of air behind her and a small, frightened voice behind her whispered,’ Is it the Squire?’

A small warm paw slipped into her hand, gripping it tightly. ‘Your hand’s cold, Mama.’ The thump came again, twice this time. Ellie felt her daughter jump in fright.

‘It is the Squire,’ Amy whispered.

‘No, it’s not,’ Ellie said firmly. ‘He always shouts when I don’t open the door to him. Doesn’t he?’ She felt her daughter’s tight grip on her hand relax slightly as the truth of her words sank in. ‘Wait here, darling and I shall see who it is.’

She crept down another six steps, to where she could see the front door, the sturdy wooden bar she’d put across it looking reassuringly strong. Ellie had soon learned that the cottage keys counted for little against her landlord. Light flickered and danced intermittently across the dark room from Amy’s wishing candle.

Someone banged again, not as loud as before. A deep voice called, ‘Help!’

‘It must be Papa,’ squeaked Amy suddenly, from close behind her. ‘He’s seen my candle and he’s come at last.’ She slipped past Ellie and raced towards the door.

‘No, Amy. Wait!’ Ellie followed her, almost falling down the stairs in her rush to prevent her daughter from letting in who-knew-what.’

‘Hush!’ Ellie snatched her daughter to her. ‘It isn’t Papa, Amy. Papa is dead.’

Their cottage was isolated, situated a little off the main road and hidden behind a birch spinney. But further along the road was The Angel, an isolated inn which attracted the most disreputable customers. Ellie had twice been followed home… With that den of villains down the road, there was no way she would open her door to a stranger at night.

The deep voice called again ‘Help.’ It sounded weaker this time. He hit the door a couple of times, almost half-heartedly. Or as if he was running out of strength, Ellie thought suddenly. She bit her lip, holding her daughter against her. It might be a ruse to trick her.

‘Who is it?’ she called. There was no reply, just the sound of something falling. Then silence. Ellie waited for a moment, hopping from one foot to the other in indecision. Then she made up her mind. ‘Stand on the stairs, darling,’ she ordered Amy. ‘If it’s a bad man, run to your room and put the bar across your door, as I showed you — understand?’

Amy nodded, her heart-shaped little face pale and frightened. Ellie picked up the heaviest pan she had. She turned the key and lifted the bar. Raising the pan, she took a deep breath and flung open the door.

A flurry of sleet blew in, causing her to shiver. She peered out into the darkness. Nobody. Not a sound. Still holding the pan high, she took a tentative step forward to look properly and encountered something large and cold huddled on her doorstep.

It was a man, lying very, very, still. She bent and touched his face. Cold. Insensible. Her fingers touched something wet, warm and sticky. Blood. He was bleeding from the head. There was life still in him, but not if she left him outside in the freezing weather for much longer. Dropping the pan she grabbed him by the shoulders and tugged. He was very heavy.

‘Is he dead, Mama?’ Amy had crept back down the stairs.

‘No darling, but he’s hurt. We need to bring him inside to get warm. Run and fetch the rug from in front of the fire, there’s a good girl.’

Amy scampered off and returned in a moment dragging the square, threadbare cloth. Ellie placed it as close as she could to the man’s prone body, then pushed and pushed until finally he rolled over onto the rug. Then she pulled with all her might. Amy pulled too. Inch by inch the man slid into the cottage. Ellie subsided on the floor, gasping.

She barred the door again and lit a lantern. Their unexpected guest wore no jacket or coat — only a shirt and breeches. And no shoes, just a pair of filthy, muddied stockings. And yet it was December, and outside there was sleet and ice.

Blood flowed copiously from a nasty gash at the back of his head. Hit from behind; a cowardly blow. He’d been stripped of his belongings, even his coat and boots, and left to die in the bitter cold. Ellie knew what it felt like to lose everything. She laid a hand on his chest, suddenly possessive. She could not help his being robbed, but she would not let him die.

His shirt was sopping wet and freezing to the touch, the flesh beneath it ominously cold. Quickly she made a pad of clean cloth and bound it around his forehead as tight as she dared to staunch the blood.

‘We’ll have to get these wet clothes off him,’ she told Amy. ‘Else he’ll catch his death of cold. Can you bring me some more towels from the cupboard under the stairs?’ The child ran off as Ellie stripped the man’s shirt, undershirt and wet, filthy stockings off.

He had been severely beaten. His flesh was abraded and beginning to show bruises. There were several livid, dark red, curved marks as if he’d been kicked and one clear imprint of a boot heel on his right shoulder. She felt his ribs carefully and gave a prayer of thanks that they seemed to have been spared. His head injury was the worst, she thought. He would live, she thought, as long as he didn’t catch a chill and sicken of the cold.

Carefully, she rubbed a rough-textured towel over the broad planes of his chest and stomach and down his arms. Her mouth dried. She had only ever seen one man’s naked torso before. But this man was not like her husband.

Hart’s chest had been narrow and bony, white and hairless, his stomach soft, his arms pale, smooth and elegant. This man’s chest was broad and hard, but not bony. Thick bands of muscles lay relaxed now in his unconscious state, but firm and solid, nevertheless. A light dusting of soft, curly dark hair formed a wedge over the golden skin, arrowing into a faint line of hair trailing down his stomach and disappearing into his breeches. She tried not to notice it as she scrubbed him with the towel, forcing warmth and life back into his chilled skin.

He was surprisingly clean, she thought. His flesh did not have that sour odour she associated with Hart’s flesh. This man smelt of nothing — perhaps a faint smell of soap, and of fresh sweat and… was it leather? Horses? Whatever it was, Ellie decided, it was no hardship to be so close to him.

Despite his muscles, he was thin. She could count each of his ribs. And his stomach above the waistband of his breeches was flat, even slightly concave. His skin carried numerous small scars, not recent injuries. A man who had spent his life fighting, perhaps. She glanced at his hands. They were not the soft white hands of a gentleman. They were strong and brown and battered, the knuckles skinned and swollen. He was probably a farm labourer or something like that. That would explain his muscles and his thinness. He was not a rich man, that was certain. His clothes, though once of good quality, were old and well worn. The shirt had been inexpertly patched a number of times. As had his breeches.

His breeches. They clung cold and sodden to his form. They would have to come off.

« Return to The Virtuous Widow

“My favorite of the three novellas is Anne Gracie’s “The Virtuous Widow.”… a sweet and enjoyable romance…. a most satisfying happily ever after.”

“An overly familiar plotline is transformed into something new and beautiful by virtue of Ms. Gracie’s talents. Tender and sweet and subtly sensual, this novella is truly a gift to readers.”