Excerpt: How the Sheriff Was Won 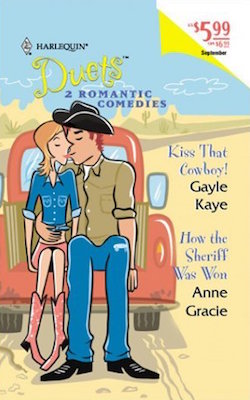 Jassie is a not very successful big-city reporter. When her great -uncle leaves her a small town Montana newspaper, stipulating she must run it for a year to inherit, Jassie decides a year in the sticks won’t hurt her. She’ll do her time, sell the paper and return to the city. She’s arrived in Bear Claw Montana on a dude ranch bus.(By the way, Bear Claw is an imaginary town)

Jassie glared at the rambling rose balefully. Roses belonged in florist shops or in vases, not sprawling in wild abandon. In public! She peered a little closer. The roses were rambling over an arch made of deer antlers! She tried not to think of where those antlers had come from.

The white-haired, grandfatherly-looking little bus driver turned and beamed at his passengers. “Welcome to Bear Claw, folks, where the mountains and the lakes and God’s own beautiful scenery will make sure you never want to leave.”

Never want to leave? Hah! A one-horse town bristling with antlers, where there were no taxis and everybody drove pickups, where brooding mountains watched sulkily over everyone and the stores sold insects at a discount. Yeah, right!

Twelve months at most and she’d be out of here with a fat check in her pocket and a plane ticket to a city, a big city—any big city. It didn’t have to be New York where—no! She wasn’t going to think about that.

“We’ll stop here for an hour, folks, so you can have a look around, maybe buy a postcard or a cup of coffee or use the bathrooms in the restaurant here. At 3 p.m. sharp, we’ll be heading out to the Rocky Canyon Dude Ranch. That’s another forty minutes into the hills.” The bus driver beamed and Jassie couldn’t help but smile back. The man’s obvious good nature was infectious. And the town did look pretty, she told herself.

Yeah, like a chocolate box, her inner voice snickered. A twelve month sentence in a chocolate box. The restaurant they were parked in front of had a huge bench with a carved wooden bear at each end. Each bear was flanked by a tub of smiling pansies and spilling pink and white geraniums. Jassie averted her eyes.

She tugged her bulky shoulder-bag down from the overhead rack and stowed her lap top back in it. Draping her jacket over her shoulder, she clapped Rita’s Gift on her head and joined the small line of passengers slowly shuffling their way to the exit at the front of the bus, trying to think positively.

It was going to be just fine living in the middle of nowhere in a sea of wild greenery, Jassie told herself firmly as she shuffled forward. There were lots of things she liked that were green.

Mostly wearable or edible, whispered her inner voice. And none of them grew! Except for mold…

“Oops!” She ducked to avoid a collision between Rita’s Gift and the waving end of the fishing pole of the man behind her. Not for the first time, Jassie wished her best friend Rita was less of an extravagant gift-giver.

Rita’s Gift was not the typical small token people usually gave departing friends. It was a huge, handwoven, straw and wild grass sun hat, liberally encrusted with yellow and purple things that Jassie suspected were meant to be flowers and brightly coloured lumpy objects—allegedly fruit.

Rita was a self-proclaimed Straw Artiste and Jassie had decided that the best place for her gift was out of sight out of mind—on her head, where other poor unfortunates had to look at it, not her. She would have ditched the horrible thing at the first opportunity, except that Rita was her best friend and the hat was a labour of love. A good person would never ditch a friend’s labour of love.

Besides, Rita was bound to visit Jassie in Bear Claw and if she didn’t see the hat, she’d smell a rat. And a rat-smelling Rita was not a pleasant sight to behold. So the hat stayed. On Jassie’s head. Instead of in the trash can.

It took forever to get to the exit, there were small children ahead of her. They carried bundles of belongings—bunnies and blankets—or rather they dragged them along the ground, dropping the odd toy as they went. Their parents tagged along after them, picking up. It all seemed very inefficient to Jassie’s fascinated eye.

“Welcome to Bear Claw, ma’am,” the driver said from his seat as she reached the exit.

“Thank you.” Jassie smiled and began to step down. As she did so the fishing pole carried by the passenger behind her collided with Rita’s Gift, which slid forward over her eyes. Jassie reached up to straighten it but her heavy shoulder-bag swung forward, and she lost her balance. She tripped over a pink bunny, missed the step completely and catapulted out into the road.

Jassie was caught in an iron grip, and held there. Rita’s Gift was squashed hard against her face, her nose felt as it it was pushed up somewhere near her left ear, her shoulder ached from where it had been wrenched by the falling shoulder-bag, her ankle was probably sprained if not broken and Jassie was plastered against a big warm object that was rumbling in her ear.

So why did she feel so good?

She wriggled a little. The hat shifted, the thing she thought was her nose turned out to be an escaping straw cherry and the rumbling in her ear turned into words.

It wasn’t the bus driver. Such a deliciously deep rumbling sexy voice could not possibly come from the white haired gnome that drove her here. Besides, he was still on the bus. The big warm object she was plastered against was definitely bigger, stronger and more masculine than anything she had been pressed against in years.

The iron grip released her gently and Jassie slid down the length of a hard male body. It felt heavenly. She sighed and closed her eyes.

“Ah shoot! I think she’s fainted.” The grip tightened again and Jassie obligingly encouraged her knees to buckle—they were tending that way anyhow. She was hauled up against that big warm body again, and joy of joys, he swept her into his arms. Scarlett O’Hara, she thought, eat your heart out.

Thump. “Ouch!” Jassie objected as she was laid unceremoniously on a hard wooden park bench. The bench with the bears, no doubt.

“The things some women wear!” rumbled in her ear. Without ceremony, he tossed Rita’s artistic creation aside.

“Ow!” said Jassie, as a purple flower caught in her hair.

“You’re alive then,” the deep voice growled sardonically. Jassie looked up, squinting into the bright sunlight at the dark silhouette of her rescuer bending over her.

“Hello there,” she murmured in her best, breathy, Marilyn Monroe voice.

“She’s fine, Don.” The silhouette turned to the driver, inadvertently blocking out the sun and making every inch of his face visible to Jassie’s eager gaze.

Hard, sculpted planes and strong bones. Not a young face, but older in experience than he was in years, she decided—mid to late thirties, probably. And dark. Dark hair, brutally cropped to remove what Jassie could tell would be the most wonderful curls if they were allowed to grow. Dark crispy curls, the sort a girl could really sink her fingers into. Dark sweeping brows, and high cheekbones. Tanned skin stretched tight over them, with lines etched into it, worry lines around his eyes and furrowing his forehead—lines of pain, not laughter. Long deep grooves running vertically down each cheek, bracketing his mouth.

And oh, what a mouth! Straight, unsmiling, hard-lipped, and scarred with the teensiest, sexiest scar, cutting right through his thin upper lip. She couldn’t see the color of his eyes yet, but she didn’t need to see them to know that they would be dark too, like the rest of him. What a man! Not handsome, not beautiful. Just… magnificent.

Oh, let him not be married, Jassie prayed. She reached up and laid a hand on his sleeve. It was not ironed, she noted exultantly. Not that it was a mass of wrinkles or anything, in fact it looked quite neat and businesslike…except for that faint stippled texture, which, to the experienced eye, declared the shirt unironed. Folded neatly as it came out of the drier. In Jassie’s book, an unironed shirt suggested an unmarried man. And an unmarried man was an available man.

“Thank you for catching me so cleverly,” she said, giving him her best come-hither smile, which was a little hard to do, given that the sun was back in her eyes and she couldn’t see a thing—she was probably squinting like a demented Buddha.

His eyes were green! The most intense, deep, heavenly, green!

“Jassie McQuilty.” Jassie sat up and held out her hand.

“Ma’am.” He touched his hat, nodded and walked off. Jassie watched him leave, her mouth agape at his brusqueness, her eyes admiring the slow easy lope of his walk. He was tall, probably about six feet or so, and beautifully muscular—not a meaty kind of muscle but the hard, ropy kind that spoke of vigorous outdoors work rather than gyms.

And his eyes were green! Beautiful, fabulous deep, dark green. Green! Her new favourite color. It was an omen.

“Say, who was that masked man?” Jassie murmured dreamily.

“Hey what? Mask did you say?” said the bus driver, Don, who was still hovering anxiously on the sidewalk.

Don chuckled. “You mean Sheriff Stone? Around this time every day he drops into Ma’s Diner over there. He often meets up with the bus.”

“Sheriff Stone…” Jassie sighed, then catching sight of the driver’s very interested stare, she gathered her scrambled wits together and got to her feet.

“You sure you’re okay, ma’am?” He hovered anxiously.

“I’m just fine, thanks to your sheriff,” Jassie assured him. “I really must thank him properly once I get settled in. It could have been a very nasty fall.”

She hesitated, knowing it would be a little unsubtle to ask, but unable to resist. “I must invite him and… Mrs Stone? Over to dinner.” She looked at the bus driver, waiting for him to confirm or deny the sheriff’s married state.

Don grinned knowingly. “Planning on staying a while, are you?”