The HNSA (Historical Novel Society of Australasia) Conference was really interesting — quite different from Romance Writers’ conferences, and I really enjoyed it. Romance writers’ conferences are mostly about the craft of writing and business and publishing, and I always enjoy them. The HNSA Conference was more about ideas — issues to do with research and people’s lives, research challenges across eras, truth and lies in crime fiction, historical fiction screenwriting, sources of inspiration, and much more. You can find the full program at this site. (Sorry, I tried to put a direct link to the program but Mad Mimi won’t allow it.) 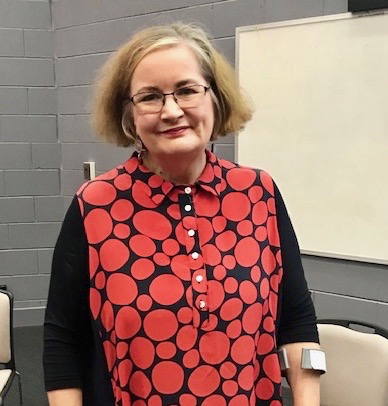 One of my favorite speakers — and also a favorite writer — is Jackie French. She was guest of honor and was interviewed on the first morning. Fascinating and inspiring. I’m a huge fan of her work.

It was both refreshing and inspiring, listening to people talk about historical writing from such varied points of view. As well, so many of the speakers and panelists were natural storytellers, and were so interesting I wanted more, and bought their books. I learned things about history — mostly Australian history, but also South African and NZ and other times and places — that I had no idea of.

Thinking about all these different stories and aspects and approaches to history stretched my brain, in much the same way that a good brisk walk along the seashore refreshes mind and body. (Though all the conference sitting didn’t do a lot for my back.) 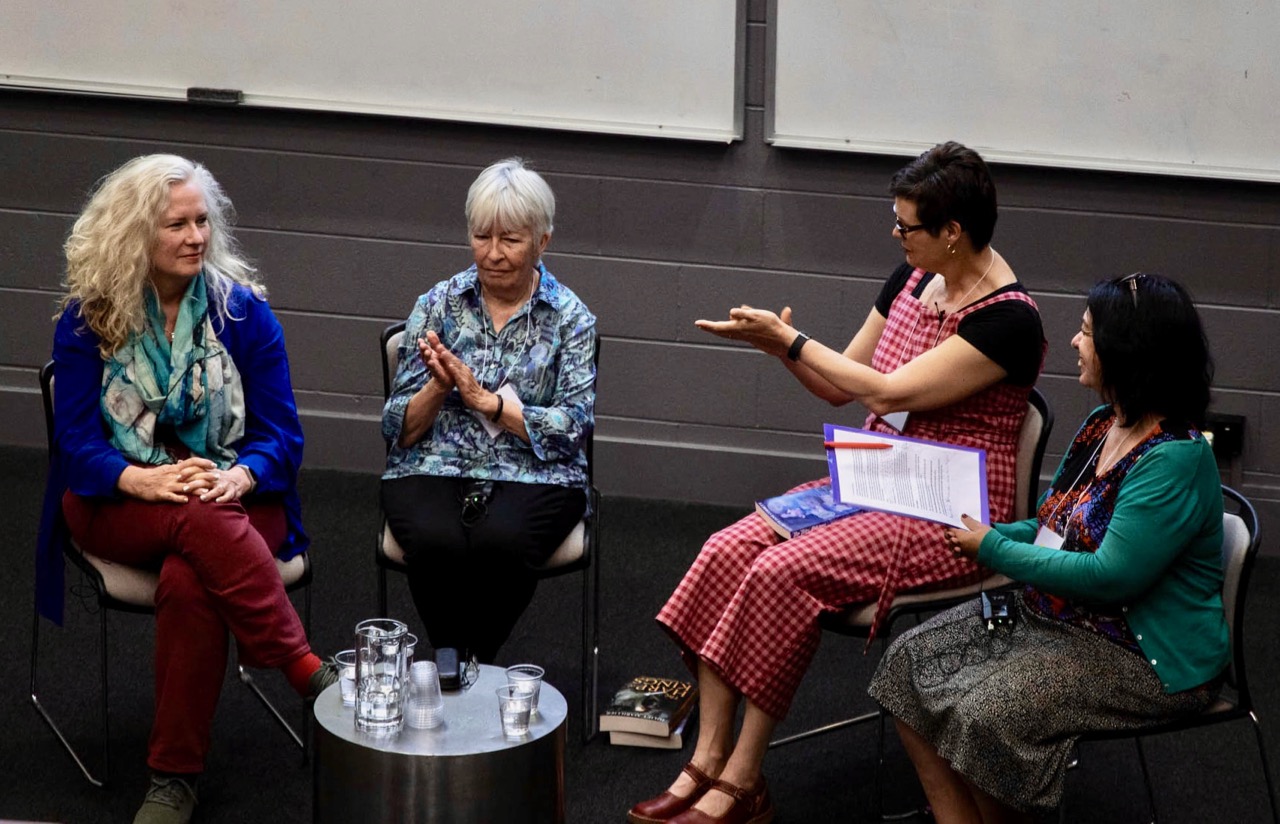 I was chairing one panel and speaking on another — one on writing historical romance series, and the other on “George and Georgette”  – ie “mad” King George, Georgette Heyer and the Regency. Both went well, I thought. 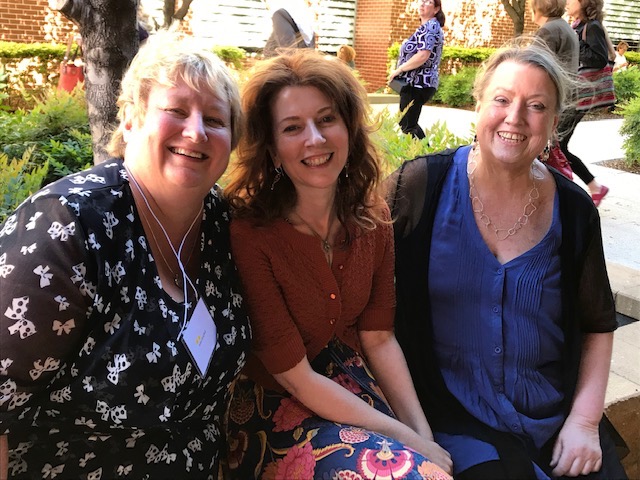 On the right are the three panelists from the “George and Georgette”  panel — Anna Campbell, Alison Goodman and me. Here we’re sitting out in the sun after the panel was over, and feeling much more relaxed.

Two nights before I was due to fly up to Sydney (and my latest book was due to be sent in) the three historical romance writers on the panel I was chairing decided they were all coming in full historical costume!!!! Because they’d all had Proper Historical Costumes made. Aarrggh! 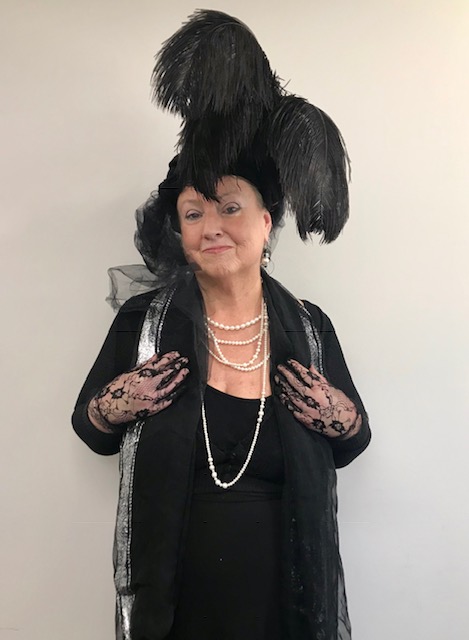 With very little time to make anything, I decided to go as a dowager in mourning, as I have lots of black — Melbourne is a city where we wear a lot of black. I hitched a long black skirt up under my bust, wore a black jersey singlet underneath as a chemise, and found a tiny net long-sleeved cardigan that I wore many years ago when I was a LOT skinnier, (though, let’s face it I was never skinny.) But I squeezed into it, and buttoned the three buttons, and lo! It looked almost like a Regency-era spencer. I draped myself in pearls, which showed up well against the black — widows in mourning wore no color, only black, silver and white.

I also had some lovely black ostrich feathers that I could use for a head-dress. I twined a silky black scarf around my black netting beekeeper veil to make a turban. With the turban thingy and the ostrich feathers clipped in to my bun, it all looked fine — ridiculous but fine. Rather as though I belonged in a Victorian-era funeral, leading the plumed funereal horses — but fine. 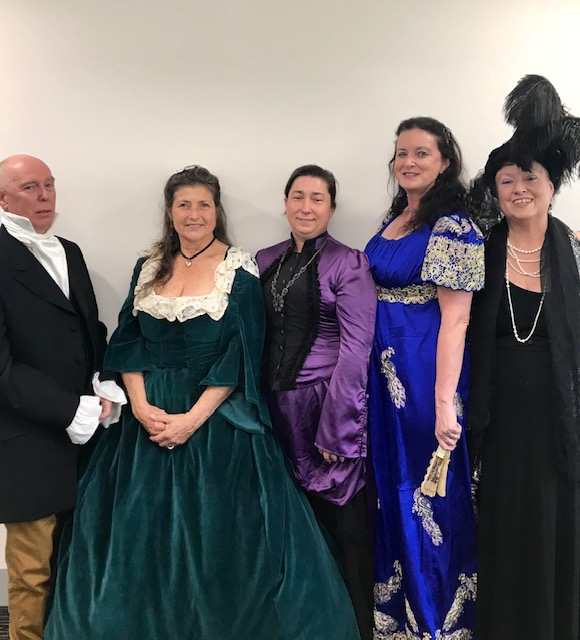 But then just before the panel began, one of the panelists decided we should get a photo taken outside. It was a very windy day, and my feathers were almost swept away. I had no time to refasten them, and ended up chairing the panel looking demented as well as silly. <g>  But the panel went well, and I think the audience enjoyed it. Here we all are in our costumes, including one writer’s historical husband. The writers, from left: Lizzi Tremayne, Renée Dahlia, Elizabeth Ellen Carter, and me. 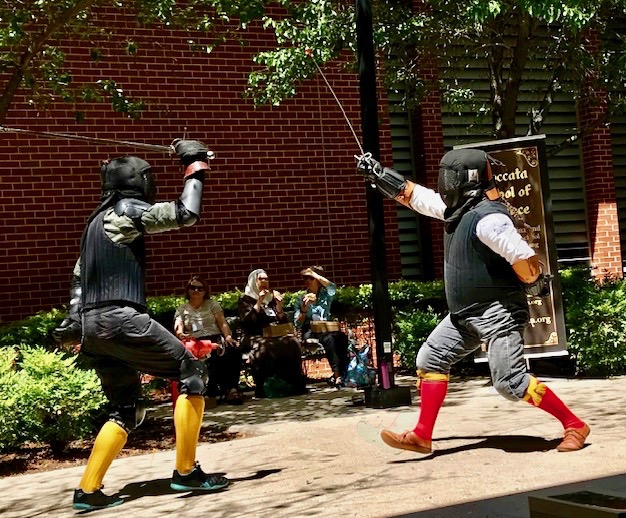 On the last day, at lunchtime we were treated to a display of sword-fighting through the ages from the Stoccata School of Defence. We sat around outside in the shade — it was a hot, sunny day — while two heroic swordsmen in full fencing gear took us through the history of sword fighting, demonstrating various kinds of fencing and different swords and even pikes. We munched on sandwiches and fruit and delicious little cakes while these two stalwarts sweated for our education. It was wonderful. 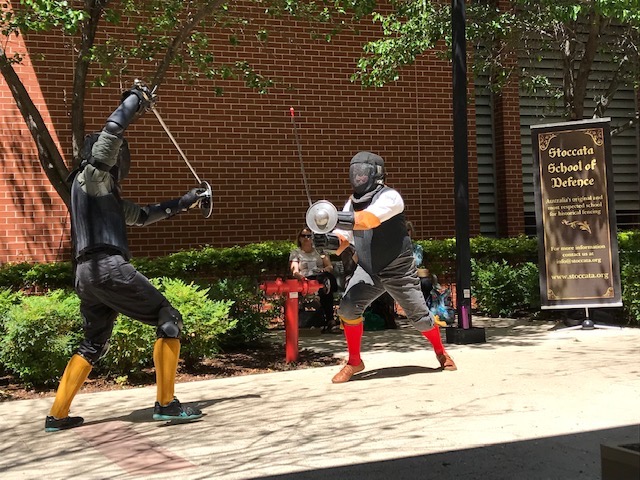 I had been planning to do a very small cruise — so many of my friends have been doing cruises lately and this was my chance. A friend had told me there was a ferry up the river from Circular Quay (where all the Sydney ferries leave from) to Parramatta (a suburb of Sydney, where the HNSA conference was held) and it would only take an hour or so, so I decided that would be my cruise for the year. LOL  And the weather was glorious.

Trouble was, by the time my luggage arrived off the plane, and I caught the train from the airport to Circular Quay, the ferry had just left, and the next one was three hours later. So no cruise for me, alas. I turned around and caught the train to Parramatta. And on the way back to central Sydney, after the conference, I shared a cab to the station, and rode the train with two historical writers, and we talked and talked the whole way. So again, no cruise, but a lovely way to finish a conference.

Some of the sessions were recorded, so when they become available, I’ll pop them up on the blog, and maybe write a bit more about the conference later.

Loved the blog and the outfits! Can’t wait to catch up on the George and Georgette panel when the recordings are made available!

Thanks, Lou — it was good to catch up with you there.

I think your costume is fabulous! You remind me of what Aunt Gussie would wear ;)

Thanks for the great wrap-up, Anne! Was wonderful to meet you and to be on your historical series panel!
Xx
Lizzi Tremayne