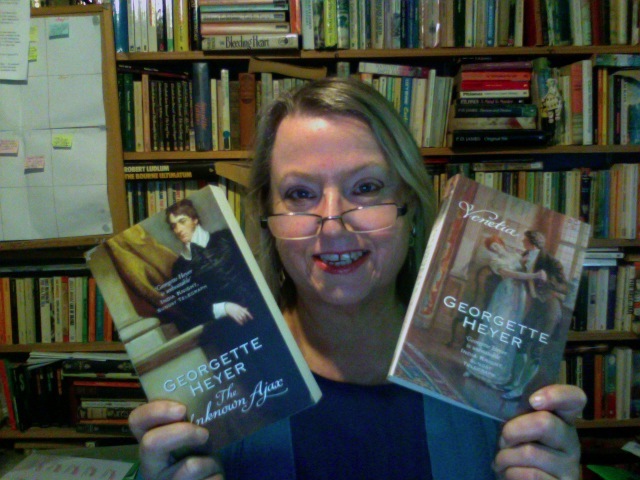 I came to Georgette Heyer young — when I was 11, and it was on a dare from my friend Merryn, in the Belmont Library (in Geelong.) You see, the library had a rule that you had to be 12 to borrow from the adult section, and Merryn and I, being prolific readers had pretty much exhausted the junior library selection. So the dare was to try to borrow from the adult library. “Who will I get?” I asked her. “My mother likes Georgette Heyer,” she said.

To our amazement we got away with this daring crime. Ten minutes later I walked out with an adult book, legitimately borrowed. It was These Old Shades. I know from hanging around Heyerites for years that most of us remember our first Heyer with fondness, and of course, it’s the start of a lifelong addiction.

Many years later, in the late 1990’s,  before I was published, I joined the Heyer List, a wonderful email group that flourished for years. I was very sad when it broke up and members went a variety of different ways. As the second Anne to join (after NZer Anne Woodley) I dealt with the confusion of Annes by naming her Anne the Original, and myself Anne t’other.

I remember when I made a trip to the USA to attend my first Romance Writers of America conference, where my first book was a RITA finalist, a lovely group of Heyer List members in LA met me and took me to lunch. One of them, Nancy “the Bosom” Meyer even drove me out to Pasadena to visit the gorgeous Norton Simon Museum. I have very special memories of that group. 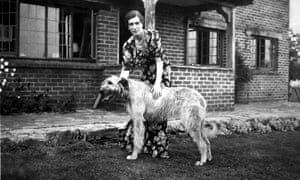 So, naturally, Heyer is also the reason I now write Regency-era romances. In some ways I feel as though I grew up in her Regency world.  I still tell people in dog park that my dog (I’ve always had rescue dogs) is a Baluchistan Hound. Nobody ever gets it but I live in hope. (That’s a photo of Georgette Heyer with one of her dogs, also not a Baluchistan Hound.)

So the conference on the weekend was fun — though a bit strange, with us all sitting at home. https://heyersociety.com/heyercon-i-soiree-2021/

There was a reading of several of Georgette Heyer’s letters which gave a fascinating insight into her relations with her publisher, and the way she plots. I was terribly impressed. She seemed to think it out first — sorting it all out in her head — and then write the book, often in a matter of a few weeks.

Back to the conference, where attendees were then invited to share some of their precious Heyer things — there were some serious collectors in the group.  I shared my earliest Heyers, bought for 20c each from an antique shop in Melbourne, where books from deceased housing clearances were piled on tables down the back. (That’s part of my battered, beloved collection.)

Then there was a showing of the first part of a 1950 German film of Arabella, with subtitles provided by two of the Heyer members. It was fascinating, though not exactly true to the book — in fact only the names of the characters were the same. I’m looking forward to seeing the whole movie.

There were a couple of panels, one a publishing panel with publishers from the UK and USA,  and then a panel of writers — with romance writers Stephanie Laurens and Eloisa James and Jennifer Kloester (Heyer’s official biographer and walking encyclopedia of All Things Heyer), with academic Kim Wilkins as moderator.

I did a reading, a small scene from my book, The Scoundrel’s Daughter, and Regency/Fantasy writer, Alison Goodman read from one of her Lady Helen books. I think I’m going to have to get a microphone to ensure good quality sound, as I was worried when I was reading that it wasn’t loud enough, and I think there are going to be more on-line events, not only because of the pandemic, but simply because they enable international events to take place easily.

The day finished with a fun quiz on Heyer’s books — I got 19 out of 20 right — for the question “In what suburb is the house bearing Heyer’s Blue Plaque?” apparently the answer “Somewhere beginning with W” was insufficient. <g> So it was a fun day.