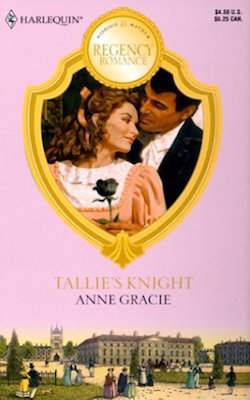 The Russian Prince cracked his whip over the arched necks of his beautiful grey horses, urging them to even greater speed. The curricle swayed dangerously, but the Prince paid no heed — he was in pursuit of the vile kidnappers… No! Lord d’Arenville was not a prince, Tallie told herself sternly. She patted her hair into place and smoothed her hands down her skirts. He was real. And he was here to be with his intended bride. He was not to appear in any of her silly fantasies.

But Mrs Wilmot was right — he certainly was handsome. Tallie waited for her cousin to call her forward and introduce her to the guest of honour. He had arrived only minutes before, clad in a caped driving coat and curly brimmed beaver, sweeping up the drive in a smart curricle drawn by two exquisitely matched greys. Tallie knew nothing at all about horses, but even she could tell his equipage and the greys were something out of the ordinary.

She watched him alight, springing lightly down from the curricle, tossing the reins to his groom and stepping forward to inspect his sweating horses before turning to greet his hosts. And thus, his priorities, Tallie told herself ironically — horses before people. Definitely not a prince.

He was terribly handsome, though. Dark hair, thick and springy, short cropped against a well-shaped head. A cleanly chiselled face, hard in its austerity, a long, aquiline nose, and firm, unsmiling, finely-moulded lips. His jaw was also long, squaring off at the chin in a blunt, uncompromising fashion. He was tall, with long hard horseman’s legs and a spare frame. And once he removed his greatcoat, she could see that the broad shoulders were not a result of padding, but of well developed musculature. A sportsman, not a dandy… A pirate king… No! A haughty guest of her haughty cousin.

Tallie watched him greet Laetitia — a light bow, a raised brow and a mere touch of lips to hand. No more than politeness dictated. He was not one of her… cicisbeos then. Tallie heaved a sigh of relief. It was not to be one of those house—parties. Good. She hated it when her cousin used Tallie and the children to cover up what she called her ‘little flirtations.’

Laetitia turned to introduce him to those of the staff whose names he might need — the butler, the housekeeper and so on. Tallie watched him, noting the way his heavy-lidded grey eyes flickered indifferently over Brooks and Mrs Wilmot.

‘And this is a distant cousin of mine, Miss Thalia Robinson, who resides here and keeps an eye on things for me.’ Insignificant poor relation who hangs on my sleeve, depending on my charity said her tone, dismissively.

Tallie smiled and curtsied. The cold grey eyes rested on her for a bare half—second and moved on. Tallie flinched, knowing that in a single glance Lord d’Arenville had noticed the freckles, the pointy nose and the crooked tooth, and despised her. He hadn’t even glanced at her nice nails. No gallant knight, he, but a cruel Count, coldly plotting the heroine’s downfa— enough!

Tallie watched his progression into the house with rueful disappointment. Mrs Wilmot was right. The man acted as if he expected the whole world to fall at his feet, while he would not so much as notice if it crumbled to dust right under his long, aristocratic nose! She wondered which of the young ladies was his intended. She had not taken to any of them, but she could not imagine anyone wishing to wed this arrogant Icicle.

‘You called, Cousin Laetitia?’ She did not allow herself to look at Lord d’Arenville, although she was very aware of him standing close by.

‘I thought I made myself clear!’ Her cousin gestured crossly.

Tallie looked upwards and repressed a grin. Three small heads were poking through the railings in complete defiance of the orders which Laetitia had issued to the nursery. Children were neither to be seen nor heard during the houseparty.

‘Your children, Tish?’ His voice was deep and resonant. In a warmer—natured man, it could be very appealing, thought Tallie irrelevantly as she gathered her skirts to run up the stairs.

‘Do they not wish to come down?’ he added.

Tallie paused and looked at him in surprise. The Icicle was interested in her cousin’s children? No, for he seemed wholly engrossed in removing a speck of fluff from his sleeve.

‘No, they do not,’ said Laetitia quickly. ‘It is high time they were in bed and it is one of Thalia’s little duties to see that they do so. Thalia! If you please!’

“Tallie’s Knight is the best Regency Romance I’ve read in years… …Gracie’s writing style is charming and wonderful and the love scenes are very sensual for a traditional Regency….Even if you’re not the biggest Regency Romance fan, I suggest you make an exception for this one. This is a special book with excellent writing and characters that touch the heart.”

“… Gracie combines an impeccable knowledge of history, an ability to create vibrant and attractive characters and, and excellent story telling ability. Tallie’s Knight is far and away the best Regency romance I have read in a long time… … Tallie’s Knight has a lovely romance, great characters, exciting adventure, delightful humour and great love scenes…”