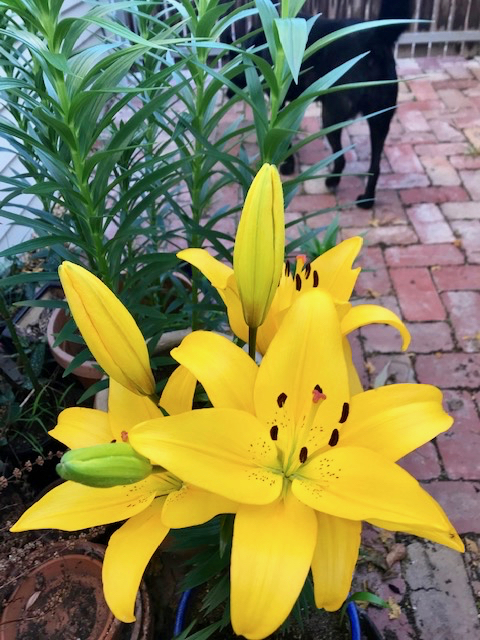 I stepped into my little courtyard the other morning to water my pot plants — after weeks of rain and cold, it’s starting to warm up — and got a lovely surprise. The lily bulbs I’d planted not so very long ago are starting to flower, and this bright yellow lily was like a little burst of sunshine. I have a few more coming into bud, and I have no memory of what colors I bought, so each one will be a surprise. (And yes, that’s Milly’s bottom in the background She’s peering through the slats of the gate in case there are enemies (dogs and especially cats) to repel.)

The courtyard is really just a place where my outdoor washing line is. I much prefer to dry my washing in the air than with a drier, and this is roofed in, so even if it rains, the washing doesn’t get wet.

Anyway, I plan to set up some shelves to arrange my various pot plants on, but I haven’t got around to it yet, and the pots are still pretty higgledy-piggledy — a couple of friends helped me move them and the pots are still where they were dumped. I will enjoy arranging them more artistically eventually, but in the meantime they’re giving me pleasure and nice surprises just by flowering. 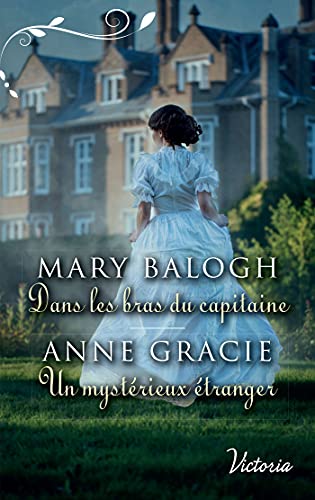 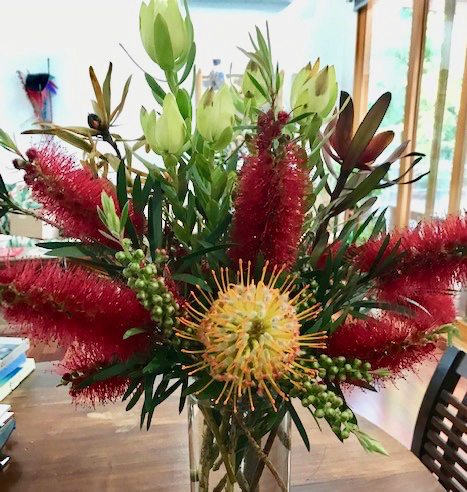 I’m afraid I’m not doing very much that’s interesting or exciting at the moment — I’m pretty much staying at home working on the latest book — Clarissa’s story. So prepare yourselves for posts about flowers and possibly vegetables for a while — I know, so exciting. <g>

I also owe some of you responses to your emails and I’m sorry for the delay, but I’m heading toward a deadline, and so have put off a lot of things. But I will try to keep up my responses to the comments on this blog, so thank you for posting here.

I got a lovely surprise the other day when I went out to bring the bins in. The bottlebrush (callistemon) bush on my nature strip (verge) had burst into flower and was covered in brilliant red blooms. The wattle birds and other nectar-feeders were already clustering around it. So I grabbed my secateurs and cut some of the flowers that would probably brush up against a parked car. Don’t worry, there’s plenty left for the birds and bee

Then I noticed that my protea bush also had a flower. It’s had lots of buds for ages and I was waiting for the first flower to open so I could see what it looked like — there are so many different varieties of protea. But some stinker reached over my front fence and picked the first flower just as it was coming into bloom, so I had to wait another week before the next one opened. Luckily it was on the opposite side to the fence. So here is my current vase of lowers in the living room — red bottlebrush, one lone, bright  protea flower that looks quite space-agey, and a couple of leftovers from the bunch I bought a couple of weeks ago. 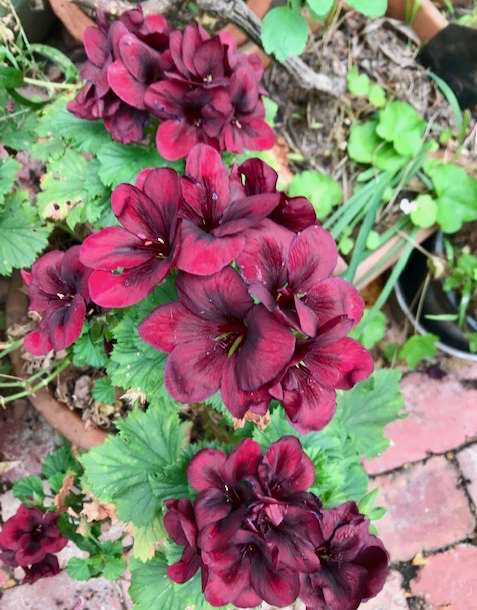 As well, a pelargonium cutting I took ages ago — I can’t remember when but I think it was pre-covid— suddenly flowered in the little courtyard and delighted me. I used to have one just like it that came as a cutting from my godmother’s garden and I loved it. But it died some years ago during a drought, and I’ve been looking for a replacement ever since. I’d forgotten I’d taken this cutting and had no idea what color the flowers would be, so when I saw these gorgeous dark crimson blooms flowering, I was thrilled.

I love plants that remind me of people. My godmother is long gone, so it’s nice to have a remembrance flower. She also gave me bluebells that brought her to mind every year when they flowered, but sadly I had to leave them behind in the old place. But I’ll get some more for the new garden. 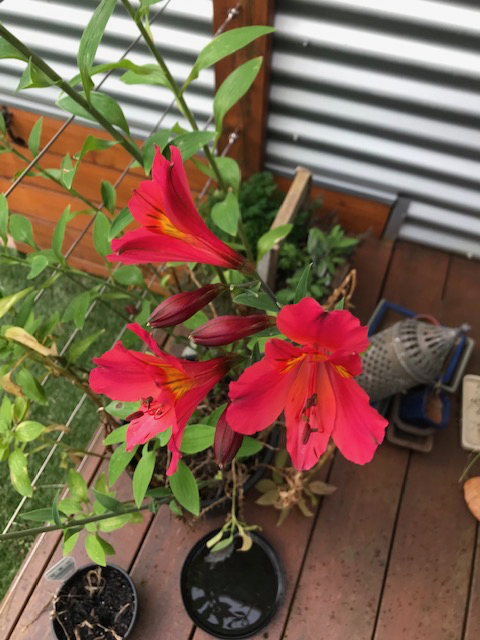 And finally in bloom are these bright red alstroemerias that were from Dad’s garden. I remember I dug up a small clump and shoved them in a pot, then forgot about them.

With no care or attention, they flowered that year in the pot, and then proceeded to grow through the bottom of the pot in my old garden. From then on, every year they flowered gorgeously for months with no attention, not even watering. And I spread them throughout the garden.

I did manage to bring some of these with me, and this is the first lot that have flowered, sitting on the back deck. Aren’t they pretty? They last ages too as cut flowers. Florists usually have them but I’ve mainly seen them in pastels and whites, not this clear, bright red.

So that’s my thrilling life for the moment. I could show you my broad beans, but will restrain myself.  And now . . . back to the wip (work in progress).