I’ve been playing with rice paper rolls recently. They’re great for a light summer lunch, or even a snack.  And the ingredients are pretty easy to come by — as long as you can get the rice paper. You need the asian-style rice paper, not the one you might use for baking. It generally comes in round sheets and is much thicker and initially stiffer than the other sort of rice paper. (I use the other sort for making nougat.) 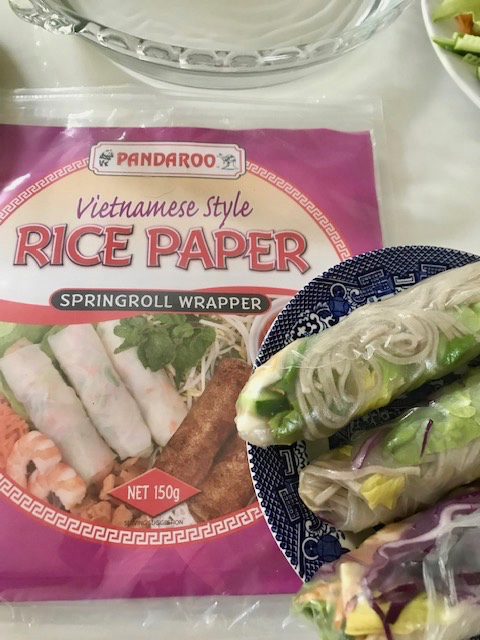 I first made my own rice paper rolls in a Vietnames restaurant (Quan 88) many years ago, with a dish they called “sliced fish.” It was sliced raw fish, cured in lime juice (or something similar) and dusted lightly with spices. As well there was shredded lettuce or maybe bean shoots, and sliced apple. It was a magic combination — I would never have thought of putting apple with raw fish.

We were given bowls of hot water, sheets of rice paper and shown how to dip the rice paper in the hot water, add the ingredients and roll them up. We weren’t very skilled at the rolling, so it was messy but delicious and I’ve been trying to find the exact way they did the fish ever since. Sadly, they no longer have it on their menu. 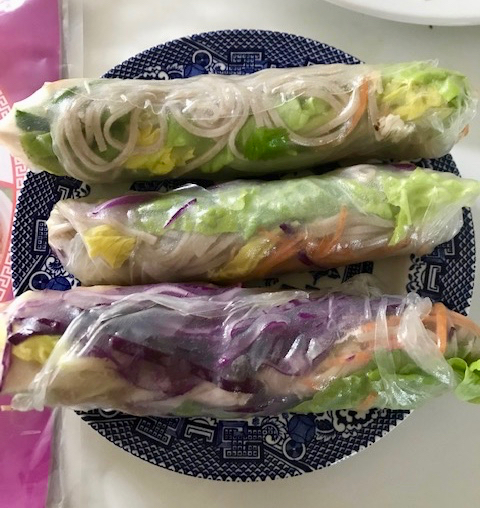 But ever since, I’ve been making my own rice paper rolls — just every now and then when the impulse strikes. I’m still not very good at rolling them. You can see how to make them here. Next time I’ll get the right sort of lettuce and that might help. But this is what I did today for lunch.

My basic ingredients today were; strips of cooked egg, thinly sliced chicken, grated carrot, shredded red cabbage, slivers of cucumber and celery, cold cooked soba noodles,  bean sprouts and herbs — coriander (cilantro) and basil.  (what you see in the pic is what was left after I’d made three rolls.)
Yesterday I made them with prawns, carrot, celery, shredded lettuce, bean sprouts, soba noodles, coriander (cilantro), basil, and mint. And thin slivers of chili. Basically, you can use what you have in the fridge. Traditionally rice noodles are used, but I find them a bit tasteless so I used soba noodles — I like them better. 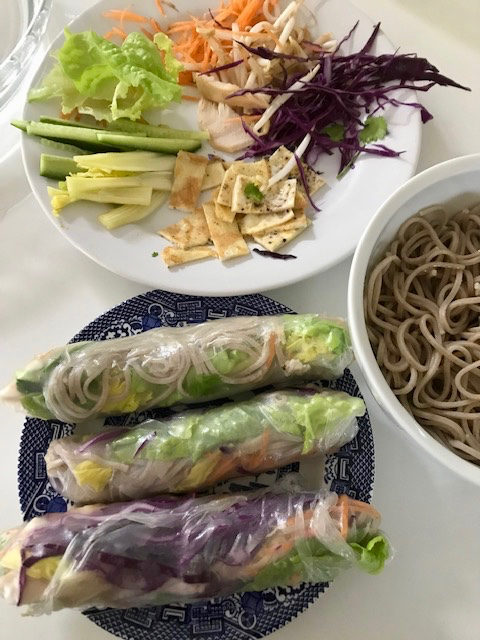 You simply dip a sheet of rice paper in hot water for a few seconds, it softens more after you take it out so really I just wet it and pop it on a plate, slightly smaller than the rice paper round, which made it easier to find the edges when it came to rolling. Then you add your other ingredients, and roll it up. There’s a quick little video here that shows you the best technique. https://www.facebook.com/watch/?v=1553722194661677

And they’re so fresh and healthy and yummy. I didn’t bother with making any dipping sauces just for my lunch, though I would if I were serving these to guests or taking them to a picnic. I just tipped blobs of chili sauce, wasabi (Japanese horseradish)  and ordinary mayo on a dish and added them per bite as the whim took me.

The school reunion is over and I enjoyed it very much. I haven’t been to many large gatherings in recent years because of CoVid, so this was extra fun. There were only 9 of the original 36 students in my class attending, but we were one of five classes and our final year was even bigger, as we were an academic high school and students came in on scholarships for the last two years. At this reunion there were only about 70 out of more than 200 possibles — some down with CoVid, others away or overseas. And plenty who we were unable to contact. 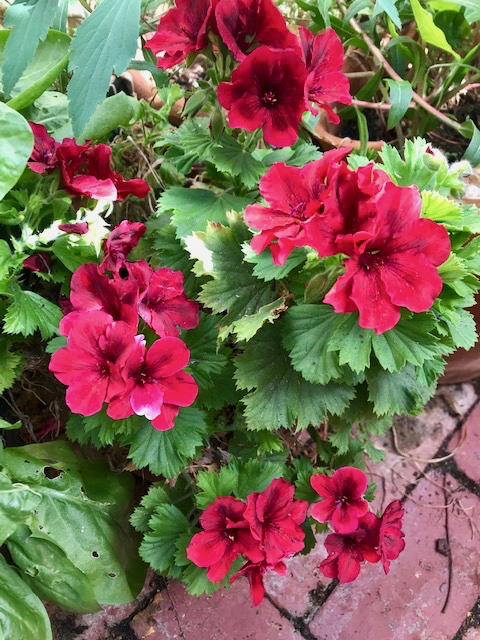 What was most interesting for me was talking to people I either hadn’t seen for decades, and some I hardly knew at school — just had an impression of.  Some had changed quite a bit, some lived up to that teenage impression and others not at all. A lot of people had travelled — Australians in general travel quite a bit: it’s a bit of a rite of passage for young people to head over to Asia and Europe—but it was fascinating how many had also worked overseas, as well as all over Australia.

I went with my two oldest friends and on the way home in the car we exchanged stories of who we’d caught up with — and who we hadn’t. We agreed it wasn’t nearly long enough. My brain was buzzing for several days afterward. And some of us have been talking about getting together sooner, rather than later and catching up properly. 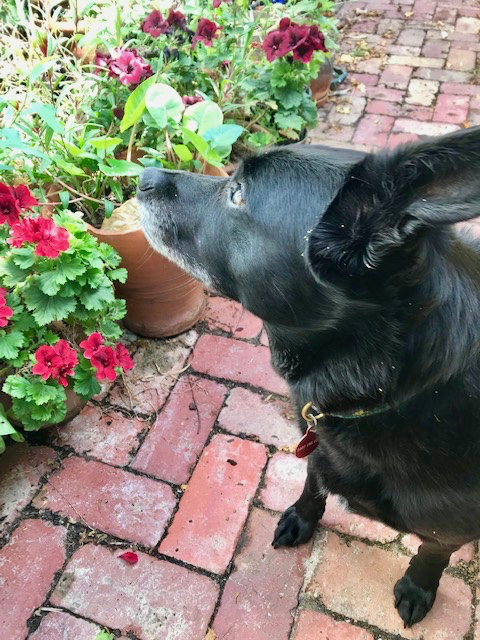 And I’m sorry, but I didn’t take many photos—was too busy talking and catching up —and I have none of me, and I don’t want to put other people’s photos up here.

So the photo above is of a red pelargonium in my courtyard — a brighter one than the dark one I showed in an earlier post. And below there’s a photo of Milly’s (slightly) better side —she was sitting very nicely but was distracted by a butterfly. You can see both the bright and dark red pelargoniums in the background.

The short list for the SOVAS Awards —The Society of Voice Arts and Sciences — has been announced and I’m delighted to say the audio version of my book, THE SCOUNDREL’S DAUGHTER, narrated by Christine Rendel is on it. Congratulations to Christine, and all the others involved in the production. I’m thrilled to bits.
#sovas2022 #voiceover #voiceoverawards #audiobooks #narrator #grateful #tantoraudio 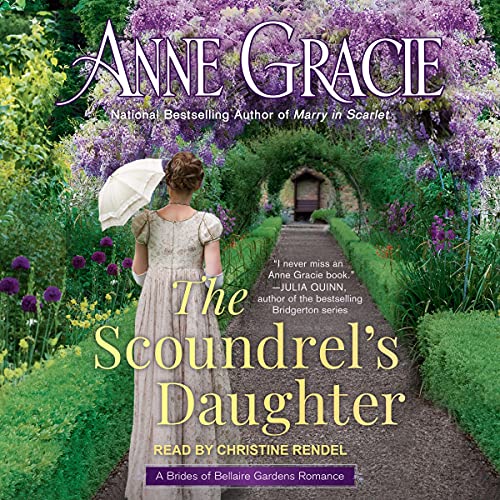